I guess we will all remember the summer of 2020, as the summer of the staycations. And although I made a few trips to our French and German neighbors (Lille, Opal Coast, Cologne & Düsseldorf), I spend most of the summer exploring Belgian cities (Ostend, Kortrijk & Leuven). Well, Flemish cities would be more accurate actually! The truth is, that the Southern part of Belgium is still very much undiscovered territory for me. As a child I have been on a few camping trips to the Ardennes with my family. For my sister Laura and me, better known as the trips were we got almost eaten by red ants. Oh the memories… There was a field trip with school to Namur, that mostly involved hotel visits and a tour of the Walloon parliament. And then there was the occasional flight from Charleroi Airport. So, like I said, Wallonia is still very much an unknown destination for me. As Dinant was ranking quite high on my staycation bucket list, I figured it was about time to get to know the province of Namur a bit better. This itinerary is obviously just a little introduction, because you can easily spend a few days there. Nevertheless, my friend and I had an amazing day, so here are our tips. 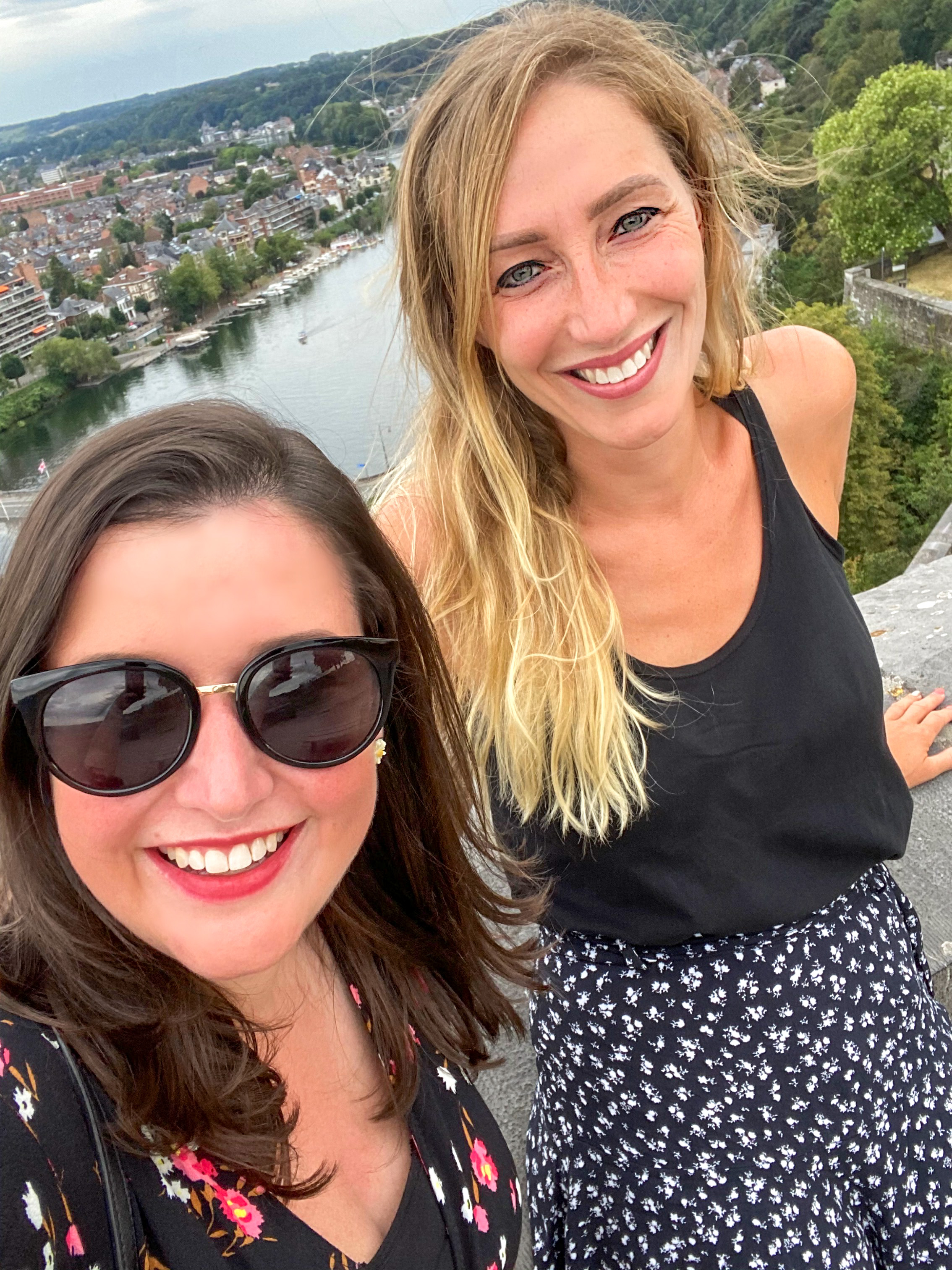 The first stop of the day was the Château de Celles, better known as the Château de Vêves. This fairytale castle isn’t located in Dinant itself, but in the village of Celles (10km’s south of Dinant). The Castle of Vêves is listed on Wallonia’s Major Heritage list and definitely worth a visit. The foundations of the castle date back, to the time of Pepin de Herstal (670-714). And since then the castle knew many different rulers. During the Renaissance, the building was completely renovated and later, under Louis XV, new modifications mainly concerned the interior design. Nowadays the castle is open to the public, you can either go on a guided tour or opt to visit the castle on your own. Kids will also very much enjoy their visit, as they get to dress up as knights and princesses during the tour. So jealous… I wanted to be a princess too! 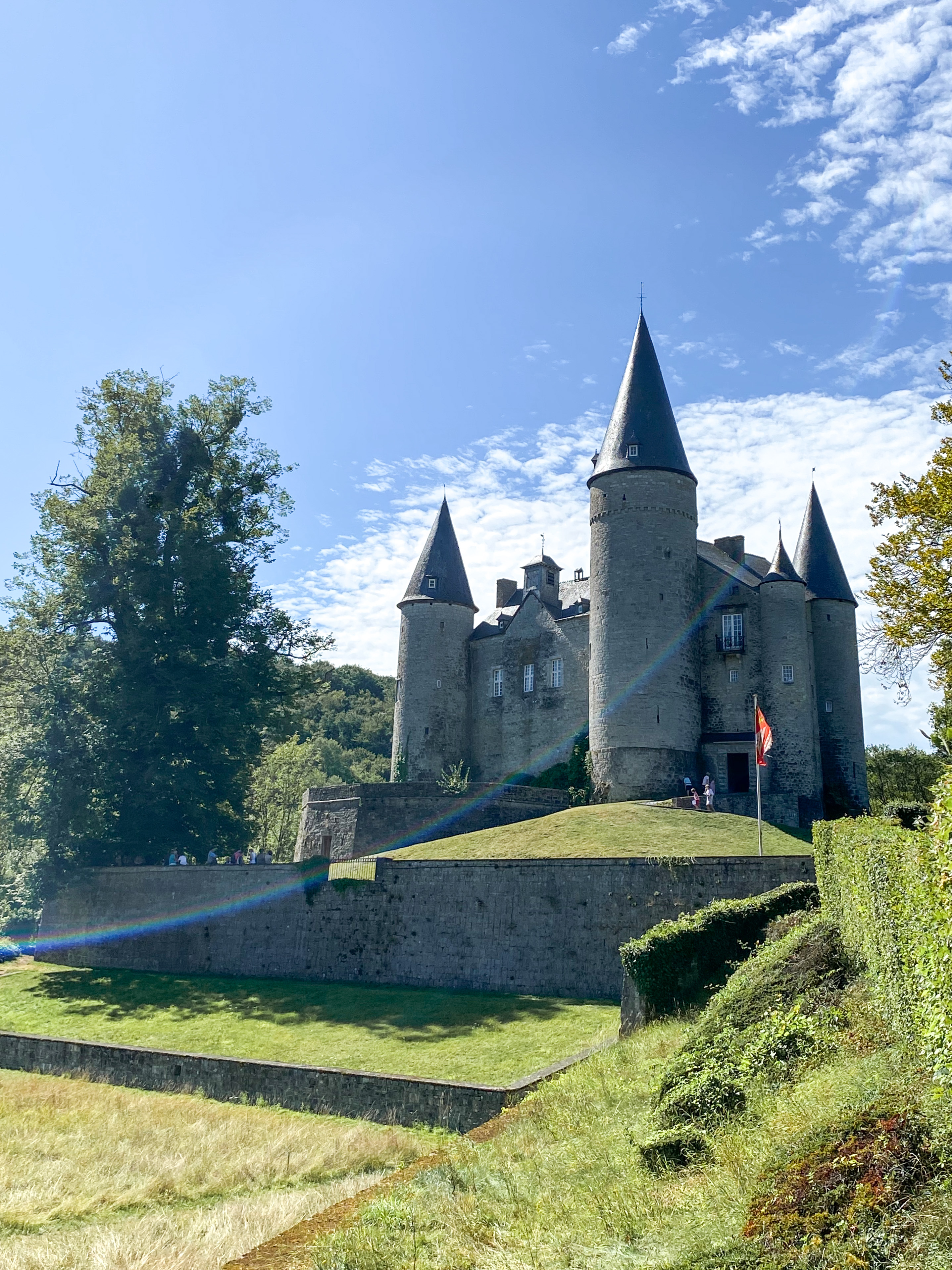 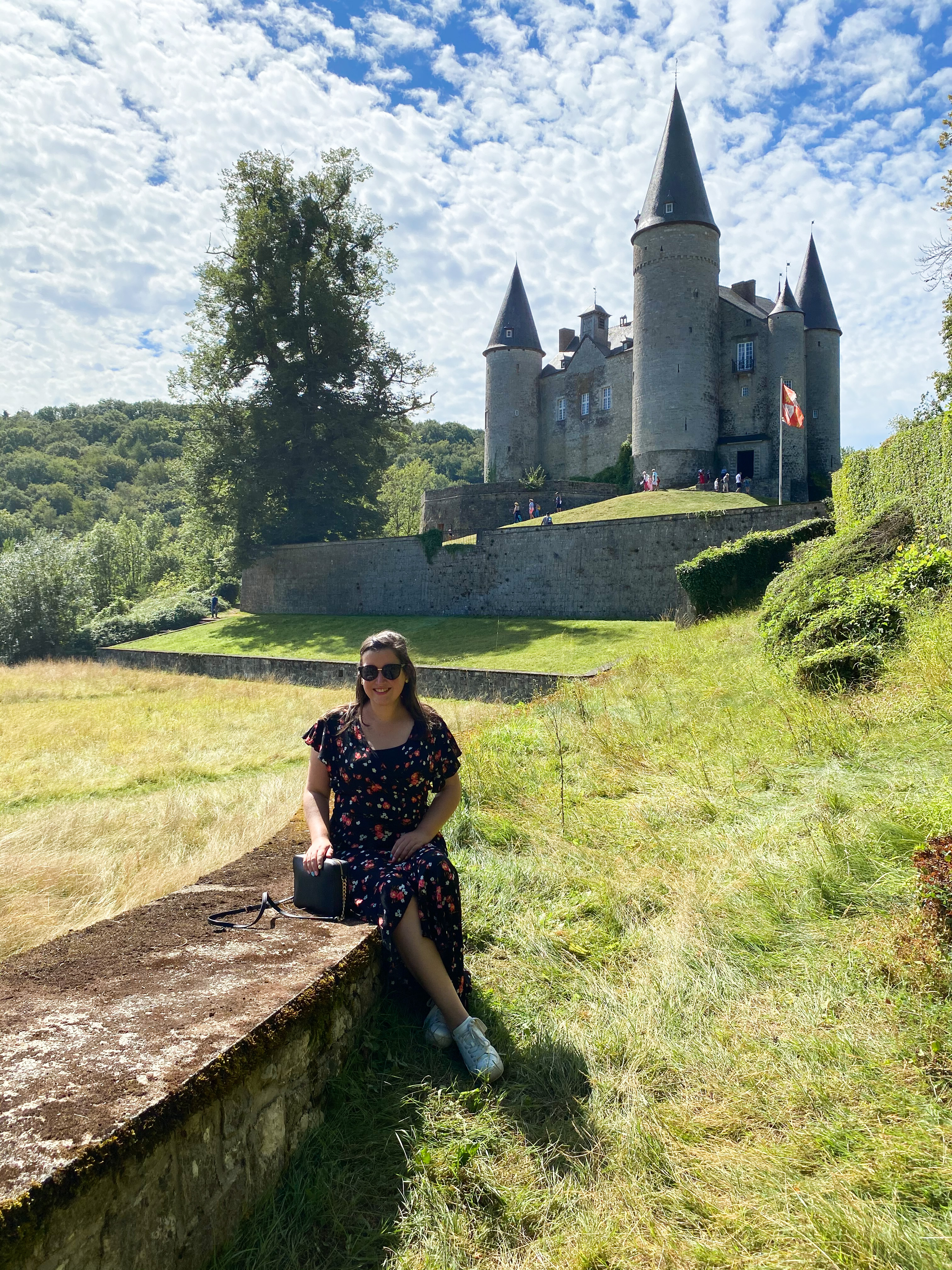 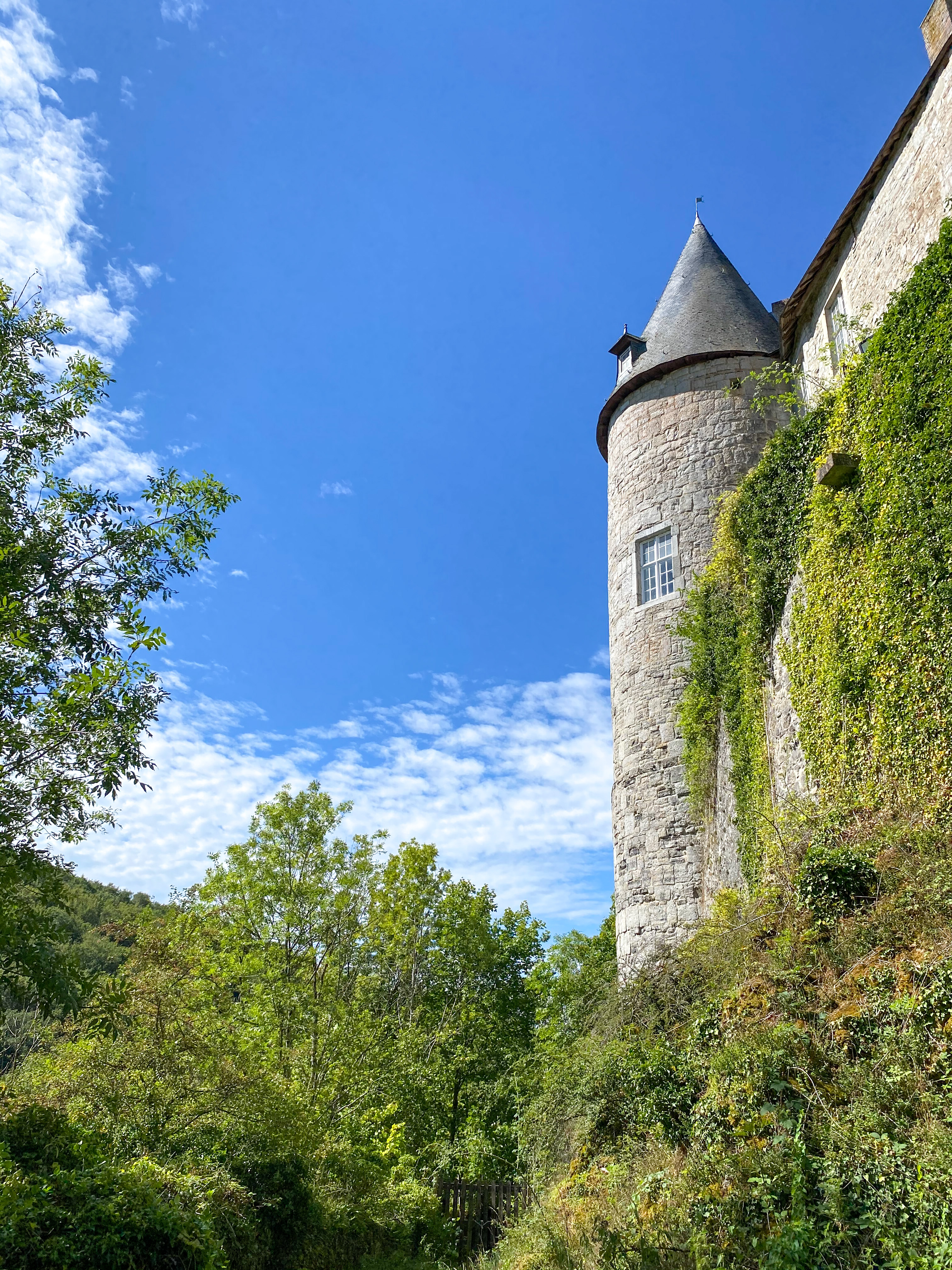 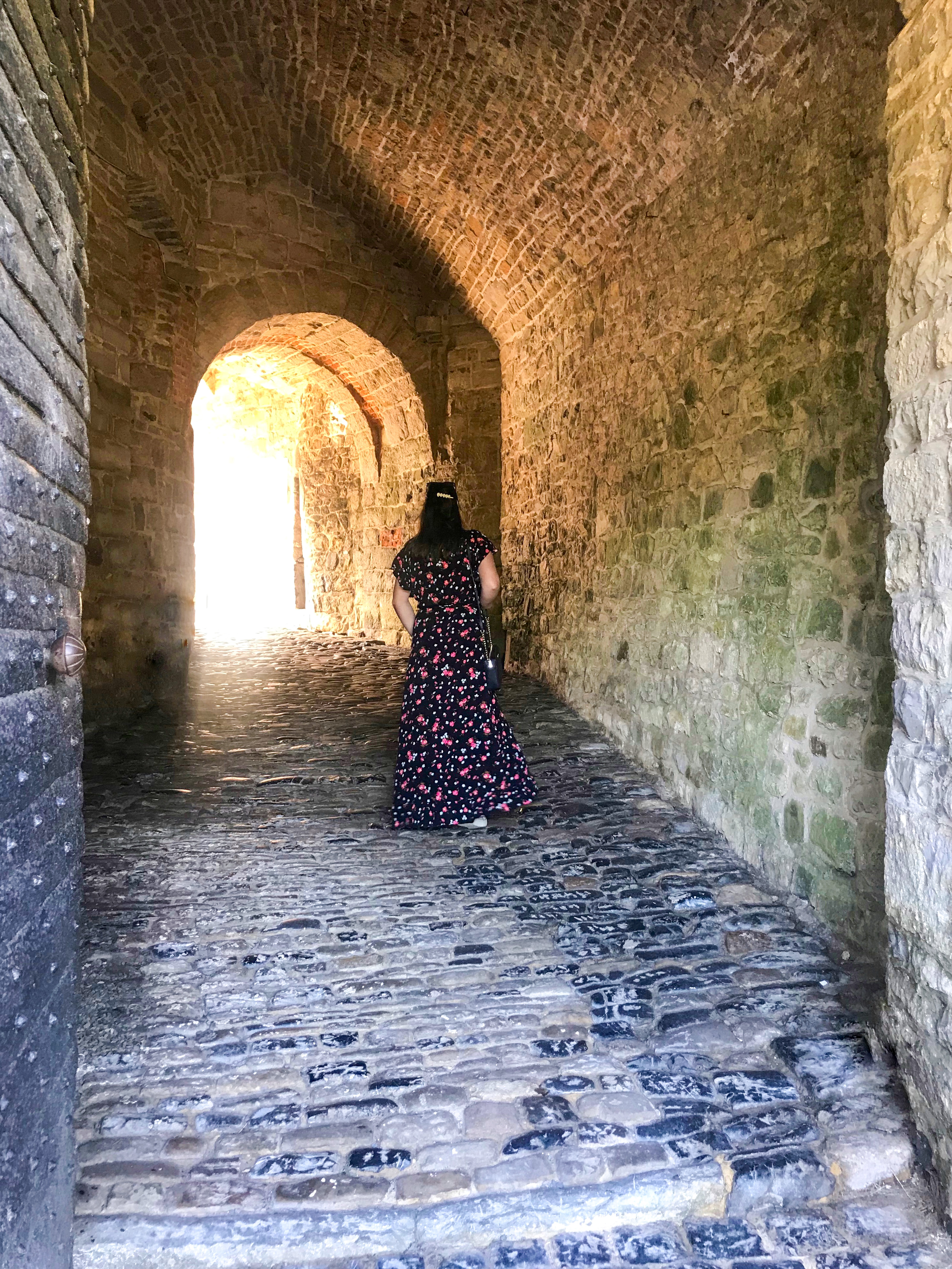 We arrived in Dinant around noon and parked the car near the train station. From there it was about a five minute walk towards the historic heart of Dinant. As we started to feel hungry, we decided to look for a lunch spot first. The restaurants on the bank of the river are quite tempting, especially on those hot and sunny days. We decided to have lunch at the cozy terrace of Café Leffe. On the menu you can find the typical Belgian cuisine. Both my friend and I went for the Meatballs with Tomato Sauce and Fries. A classic, but a goodie. If you are a beer lover, make sure to order a Leffe to pair with your meal. You’re in Belgium after all and it’s the beer from the region, so you can’t miss out on that right?! 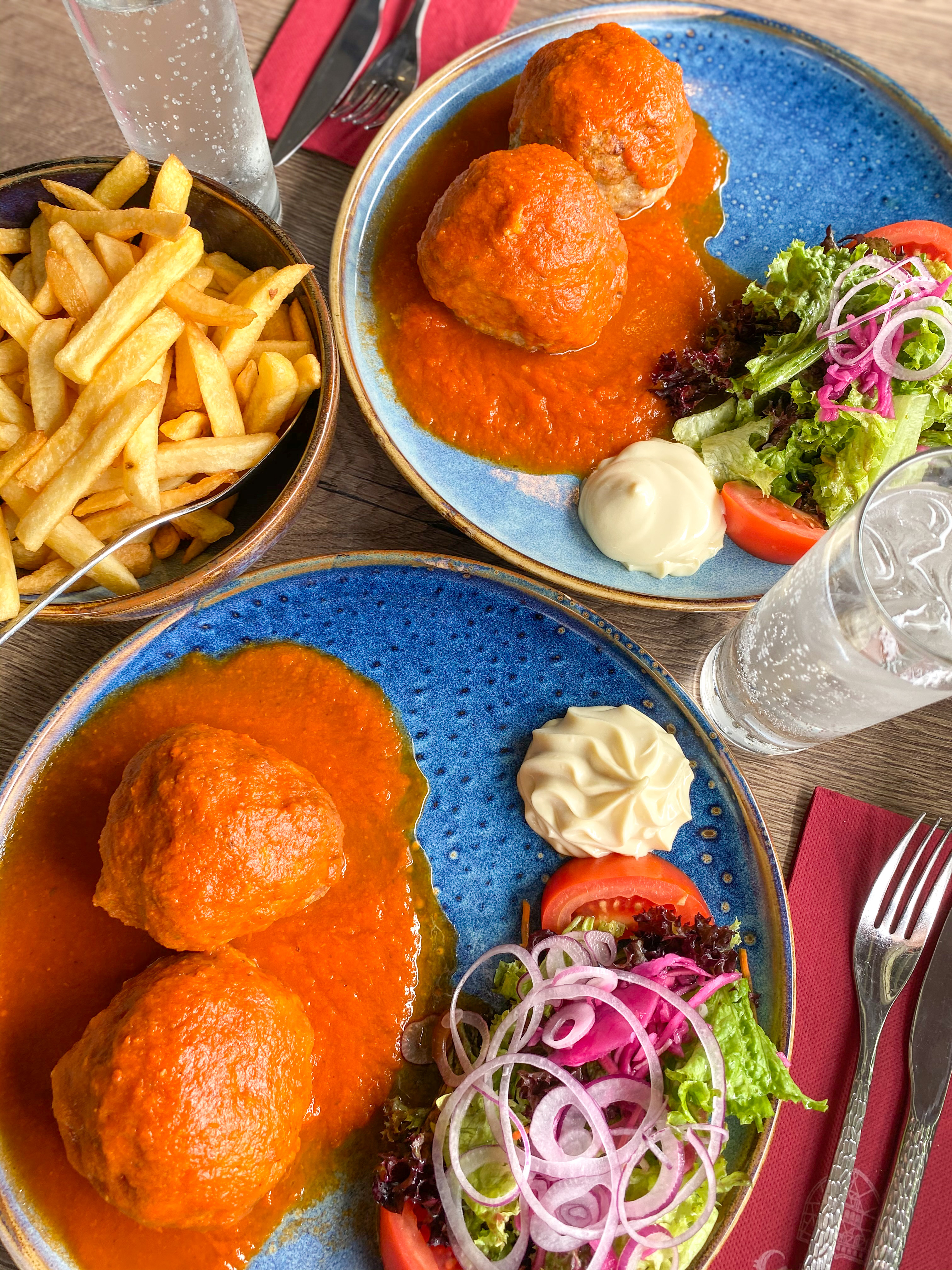 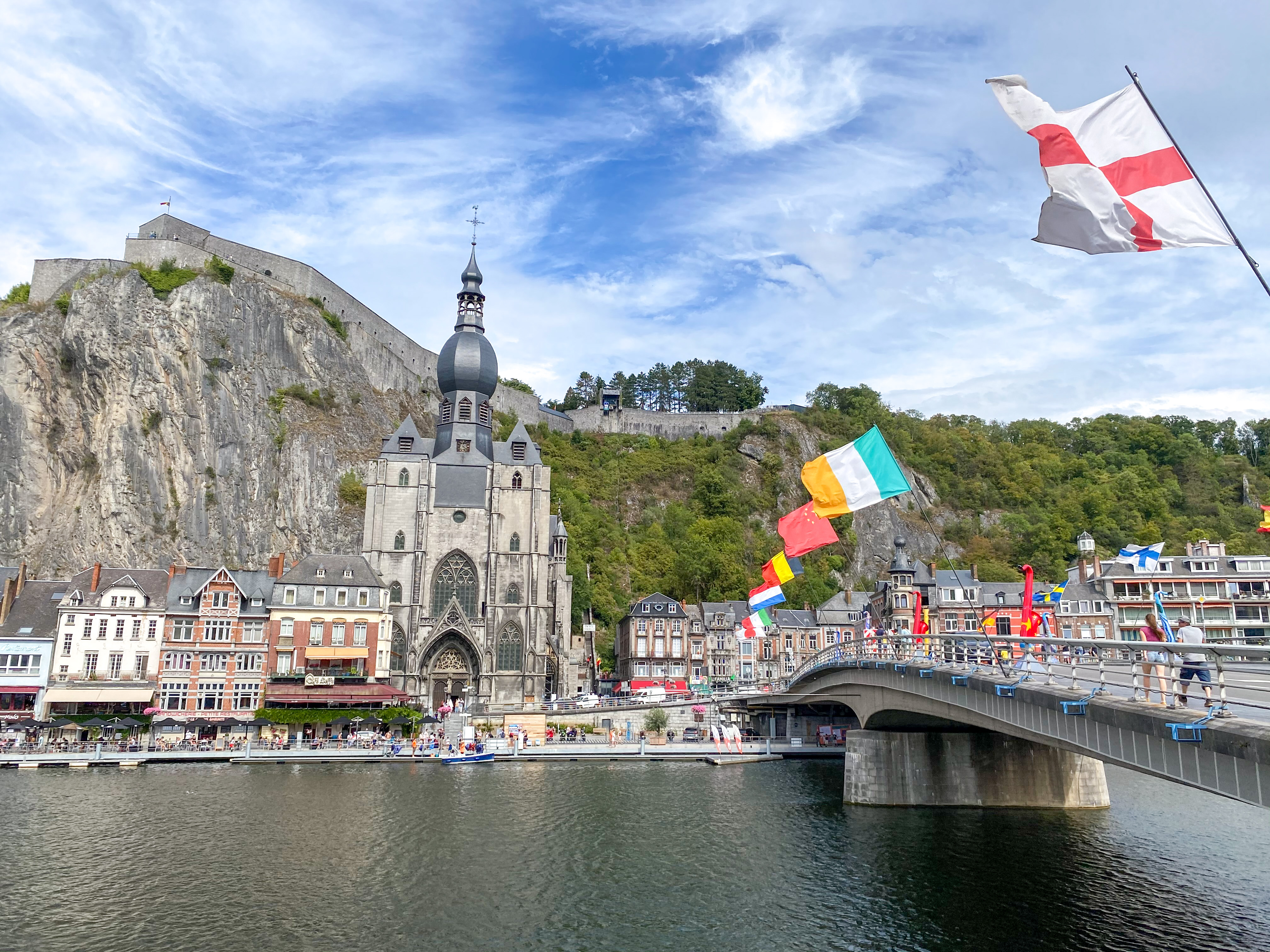 Today the Charles De Gaulle Bridge is lined up with funky saxophones on each side. This because the eventer of the saxophone, Adolphe Sax was born in Dinant. The saxophones are painted in the colors of different flags. 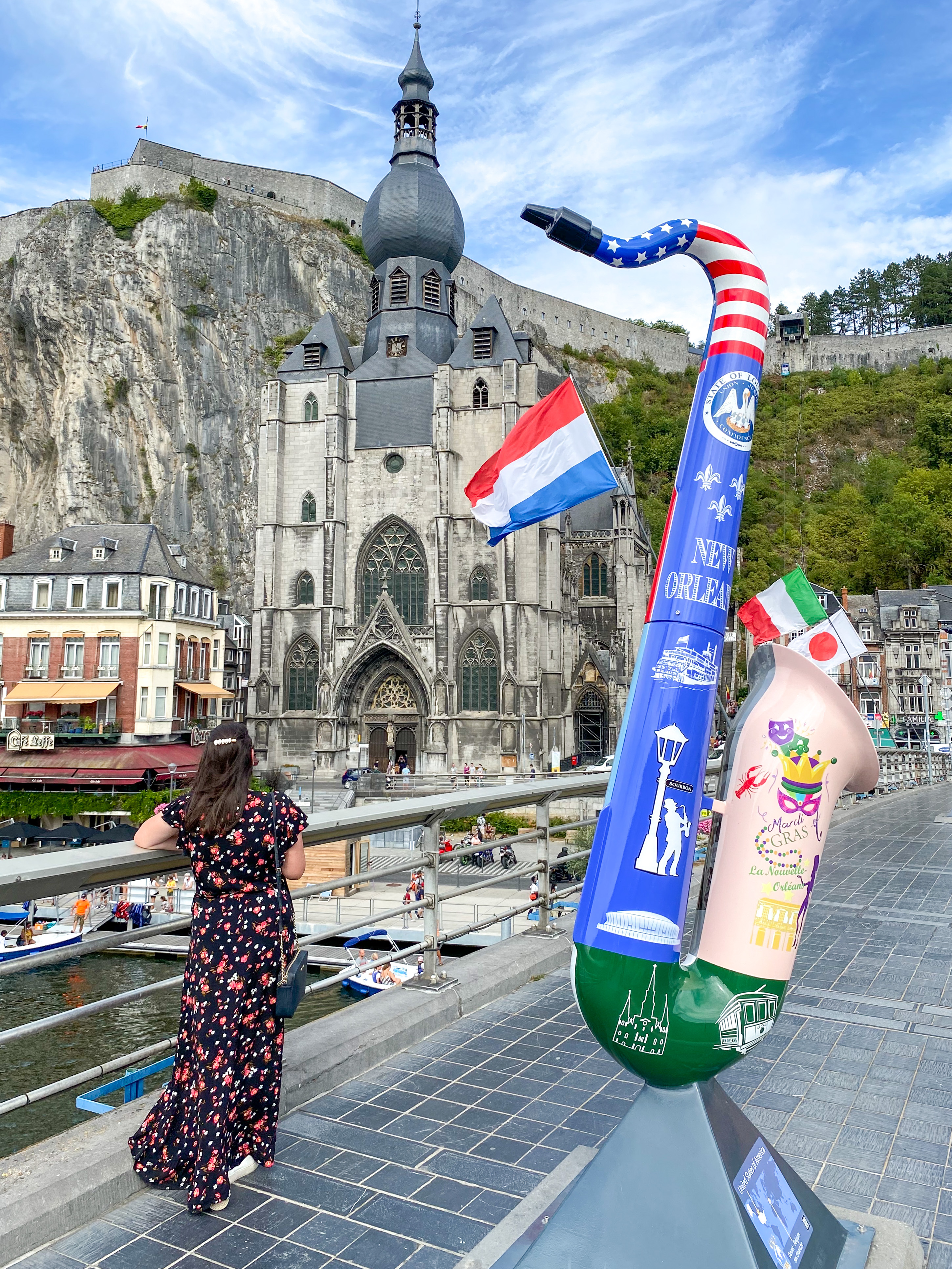 There are saxophones spread everywhere in town. One of the most beautiful ones can be find at the Dinant Town Hall. If you like to know more about the history and life of Adolphe Sax a visit to Maison Sax might be interesting to you. The museum is free of charge. 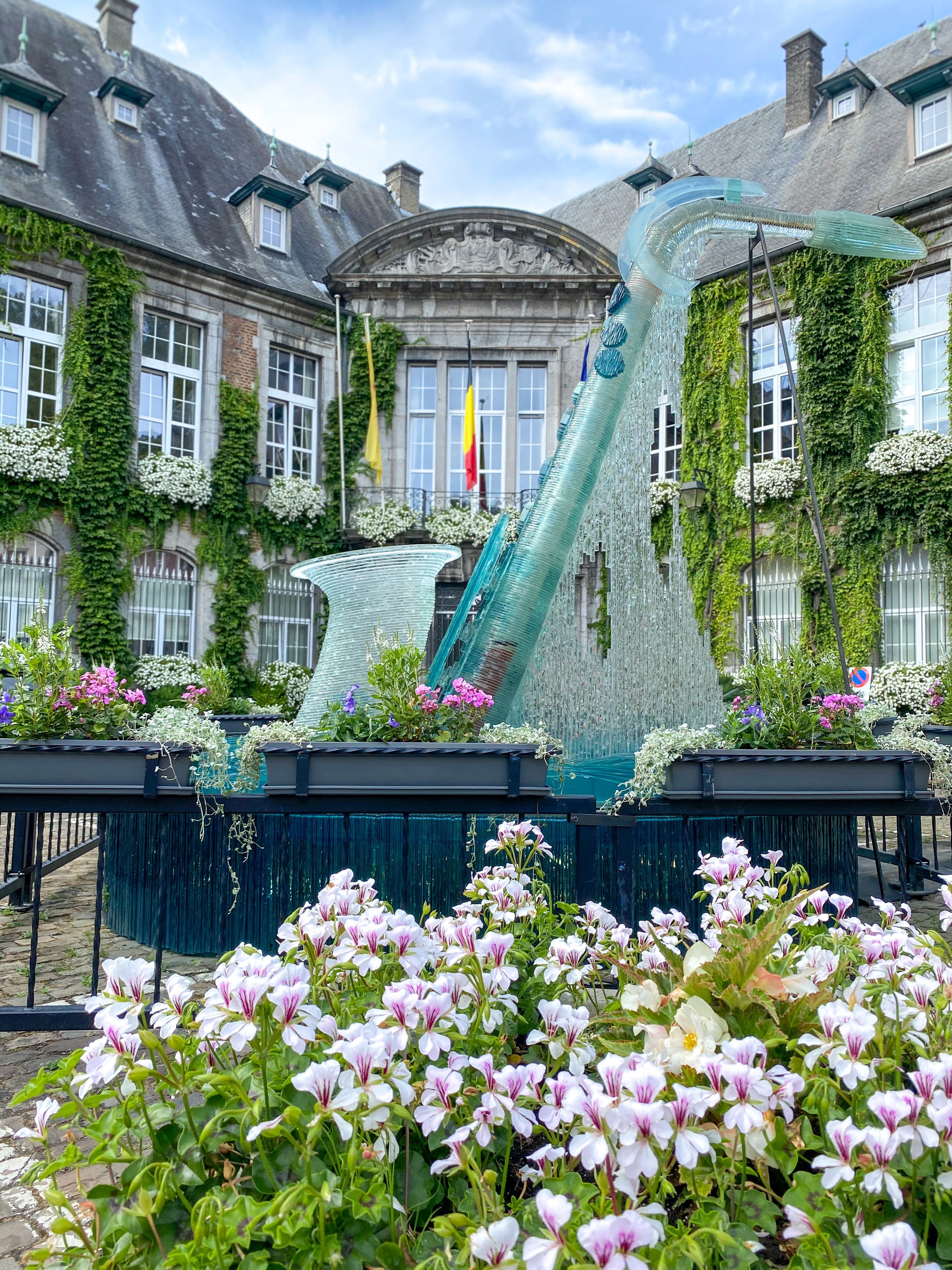 La Citadelle de Dinant is the most popular attraction in Dinant, so naturally we wanted to visit it. We quickly made way to the cable car, as we didn’t feel like climbing 400 steps. Of course many tourists were thinking the exact same thing, so the lines to go up to the citadel were quite long. We noticed that many people were waiting very closely together, and being the times were in, we decided to skip it. It’s a pity we missed out on this, because the views seemed great from the photos, but safety first you guys. Hopefully you are more lucky than we were during your visit, because it sure seemed like a fun and interesting activity. Since the 11th century the fortress was used to control the valley of the Meuse river. Nowadays the fortress is used as a Military Museum.

Next to the entrance of the cable car you can find the Church of Our Lady. It was built on the ruins of a 10th-century cathedral. The current, gothic church was opened in the 13th century. The interior of the church is absolutely stunning with stained glass and mosaic windows. 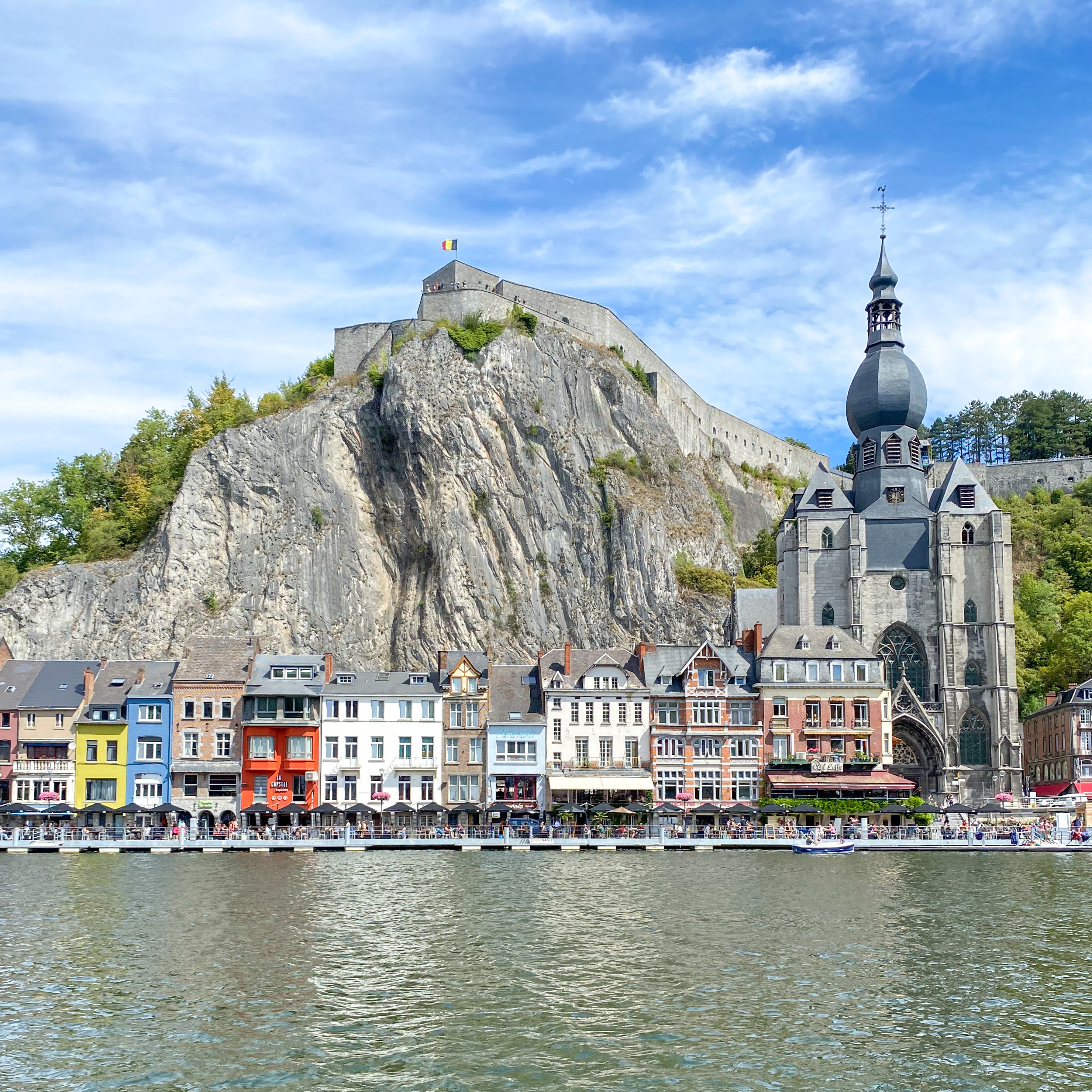 With the Meuse River flowing through Dinant, you will for sure be mesmerized by the picturesque scenes while exploring the little town. Dinant Evasion organizes regular service cruises for groups or individuals from April to October on a daily basis. They are also small electric boats available to enjoy the city on your own pace. We liked that idea very much, but when we found out that is was € 50/hour, we decided not to do it and walk around the Meuse instead. Dinant can easily be explored in a couple of hours, so we went back on our way to explore the city of Namur. 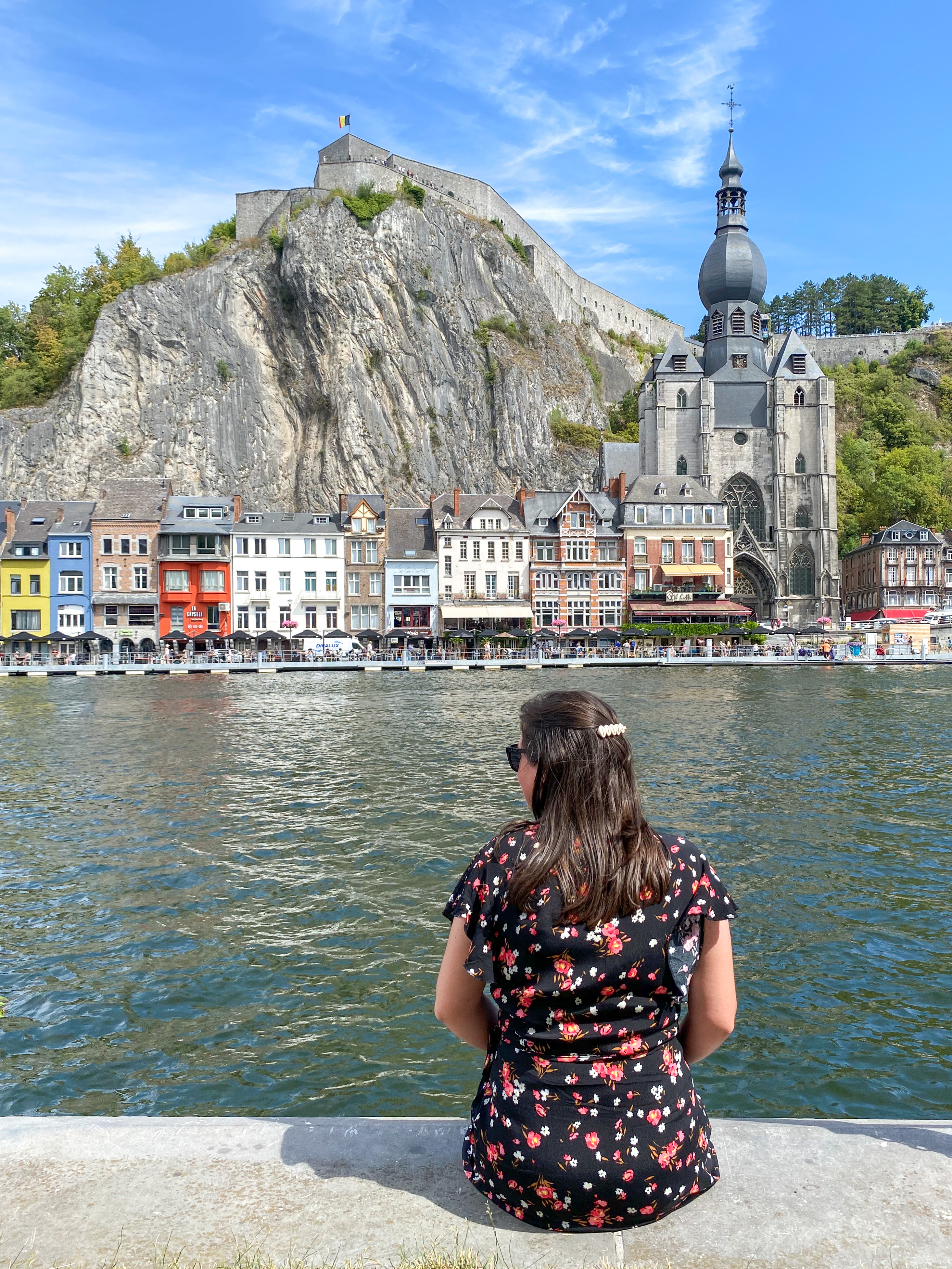 From Dinant it’s a 30 minute drive to Namur, but we decided to take the scenic route, so it took us a bit longer. We didn’t mind though, as the views upon the Meuse were wonderful and the weather was great. We came across some charming little villages, like Wépion, so it was nice to make a pitstop now and then. Wépion is known for its delicious strawberries since the 17th century. You can find several stalls to buy fresh strawberries, so you should definitely get some for the road. There is also a very good ice-cream parlor, named Fleur de Lait, if ice-cream is more your taste. So, it goes without saying that we had a yummy treat while enjoying the gorgeous views upon the Meuse right?! 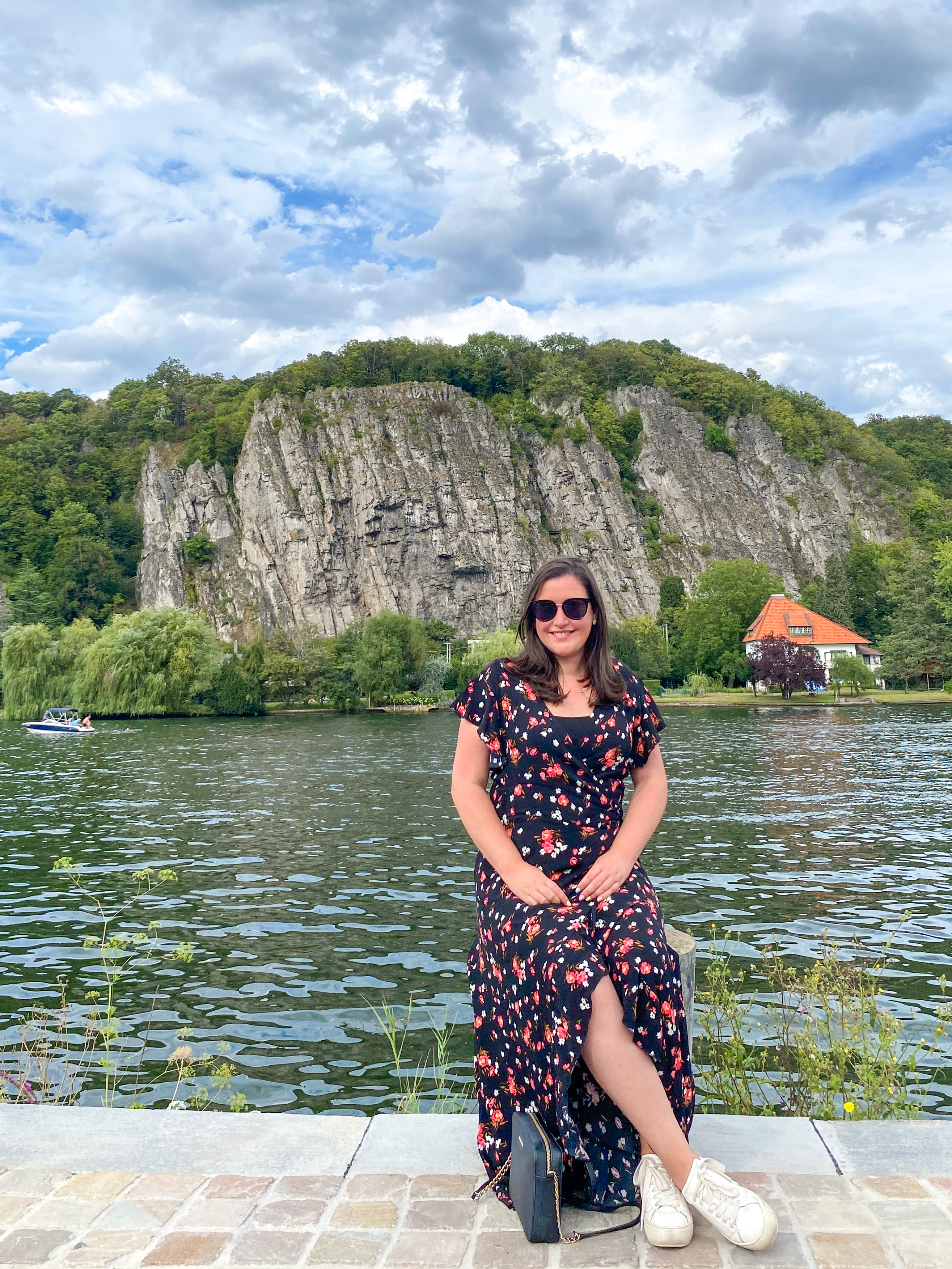 Enjoy the view from the Namur Citadelle

By the time we got to Namur, it was already 6PM, so we didn’t expect to see much of the city anymore. We decided to drive towards the Citadel and see if we could get to a viewing point to experience the city from above. Obviously the Visit Center in the old Terra Nova barracks and the underground passages were closed, but luckily for us the Citadel Park was open until 8PM (April to October). Woop Woop! 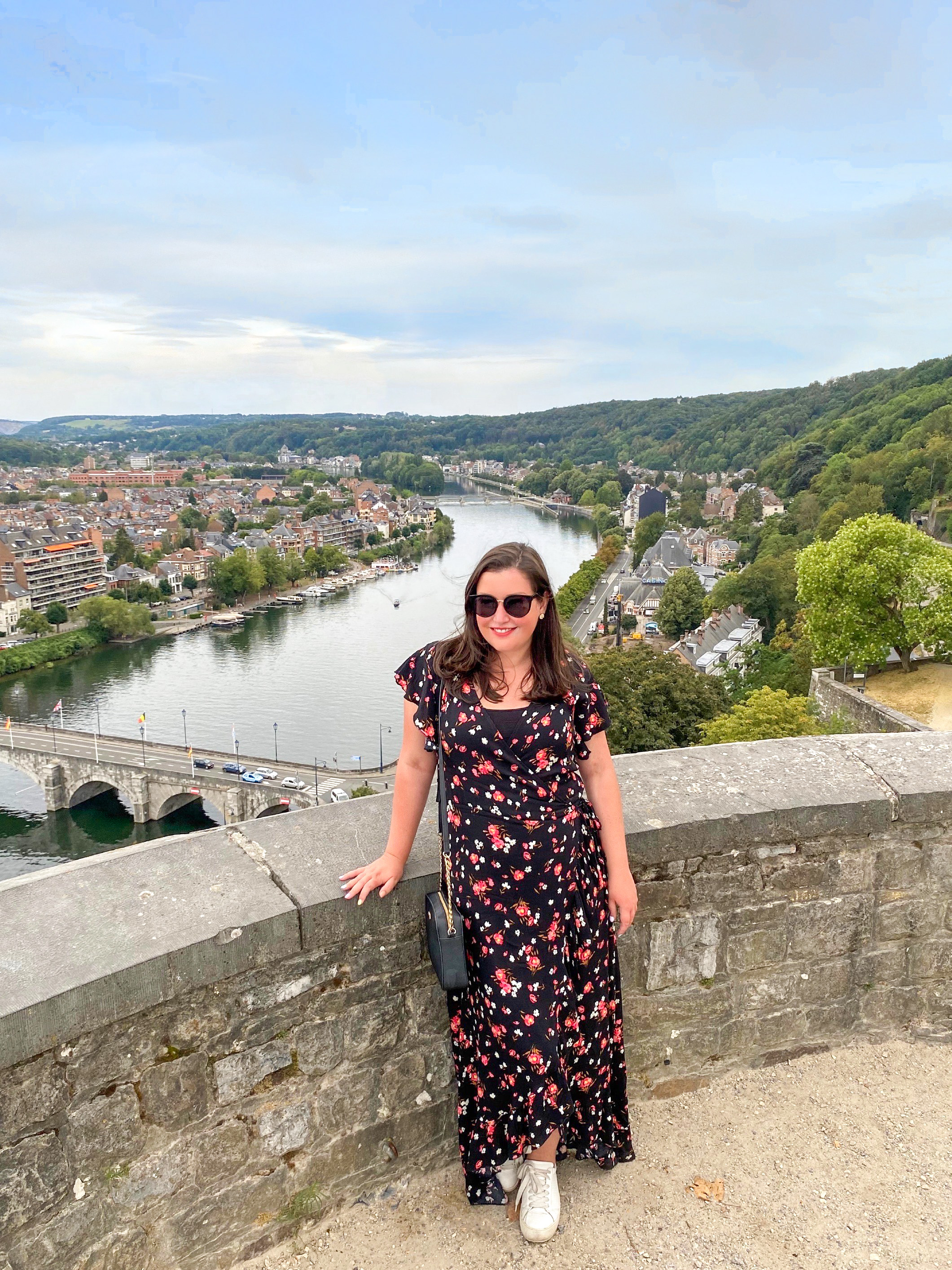 From the Citadel you get to enjoy the beauty of the city from a higher perspective: the plain of Jambes, on the Meuse side and the “Corbeille” (old town) on the Sambre side. And also the Confluence site, which is currently in full redevelopment. We were really happy that we still got to see it, because the views were absolutely spectacular. If you look closely you can spot the St-Aubain Cathedral as well. 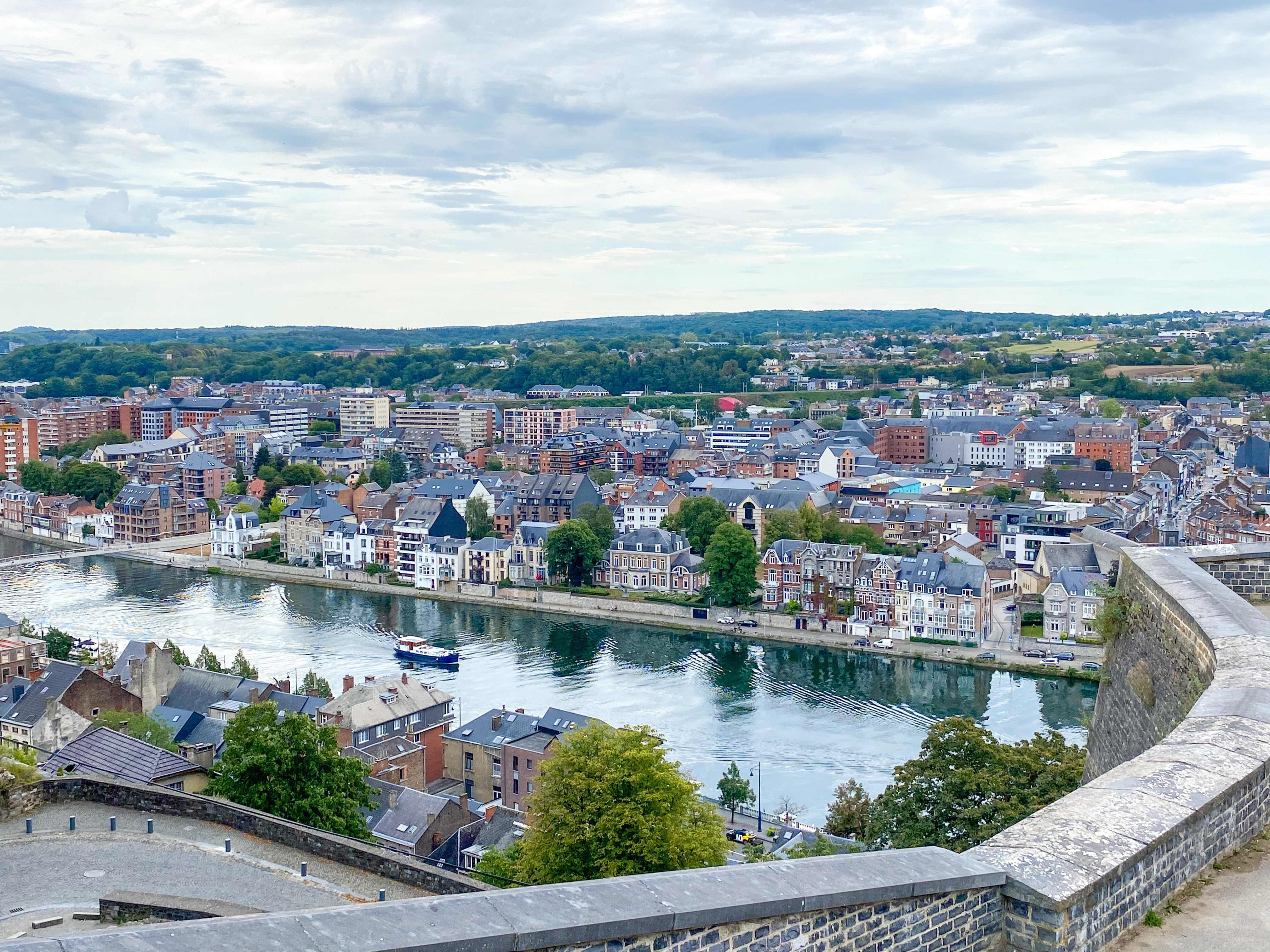 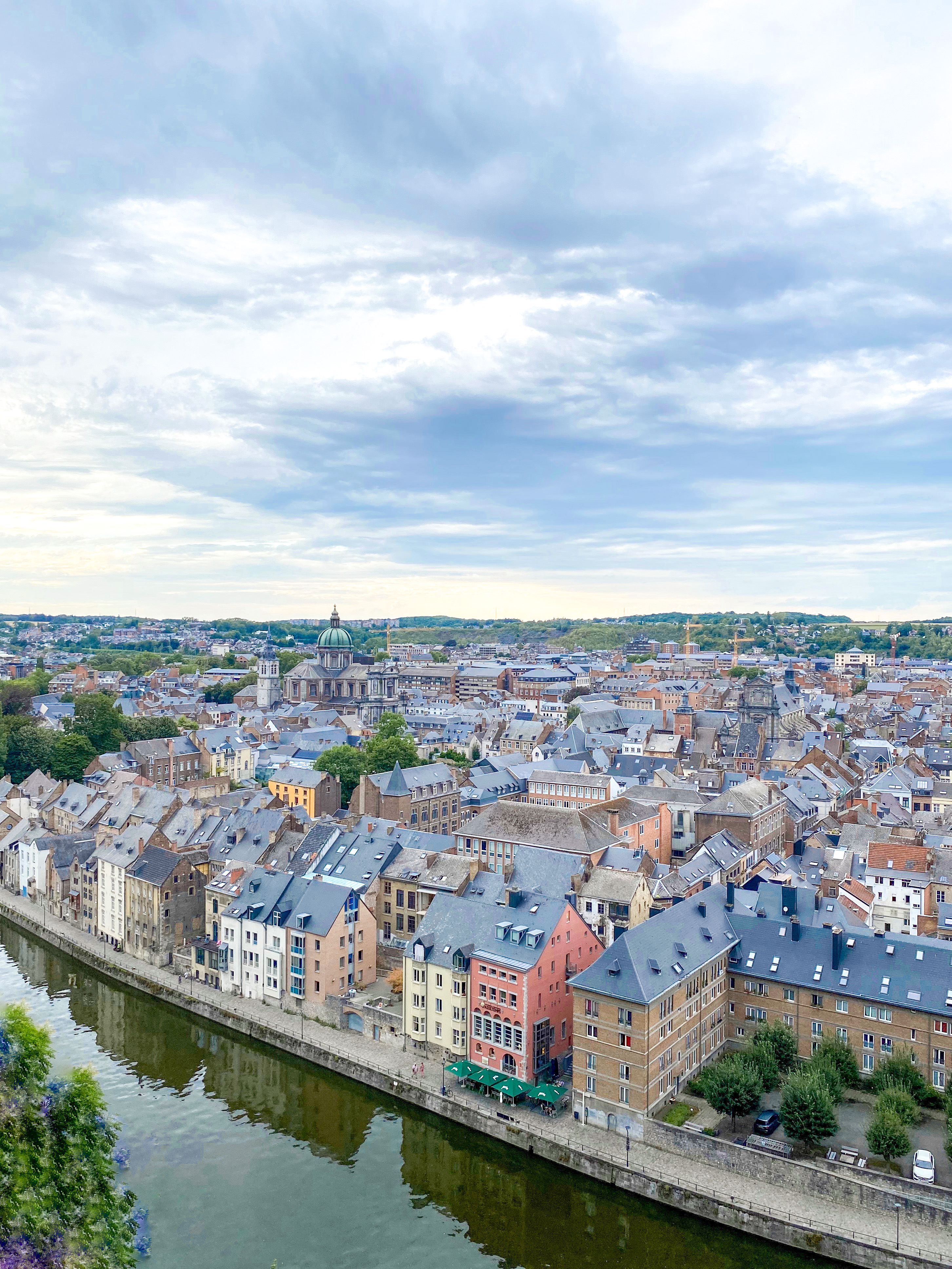 We stopped at the Château de Namur for refreshments and a bathroom break, before heading back to Ghent. The Château de Namur is a hotel and restaurant that is run by the Ecole Hôtelière de Namur. Back when I was studying Hotel Management in Brussels, we visited this hotel. The gardens are very peaceful and nice to walk around in. We were kind of hoping to have a drink on the terrace, but unfortunately it’s solely reserved for guests of the restaurant. No biggie, because we weren’t planning on sticking around long anyways. 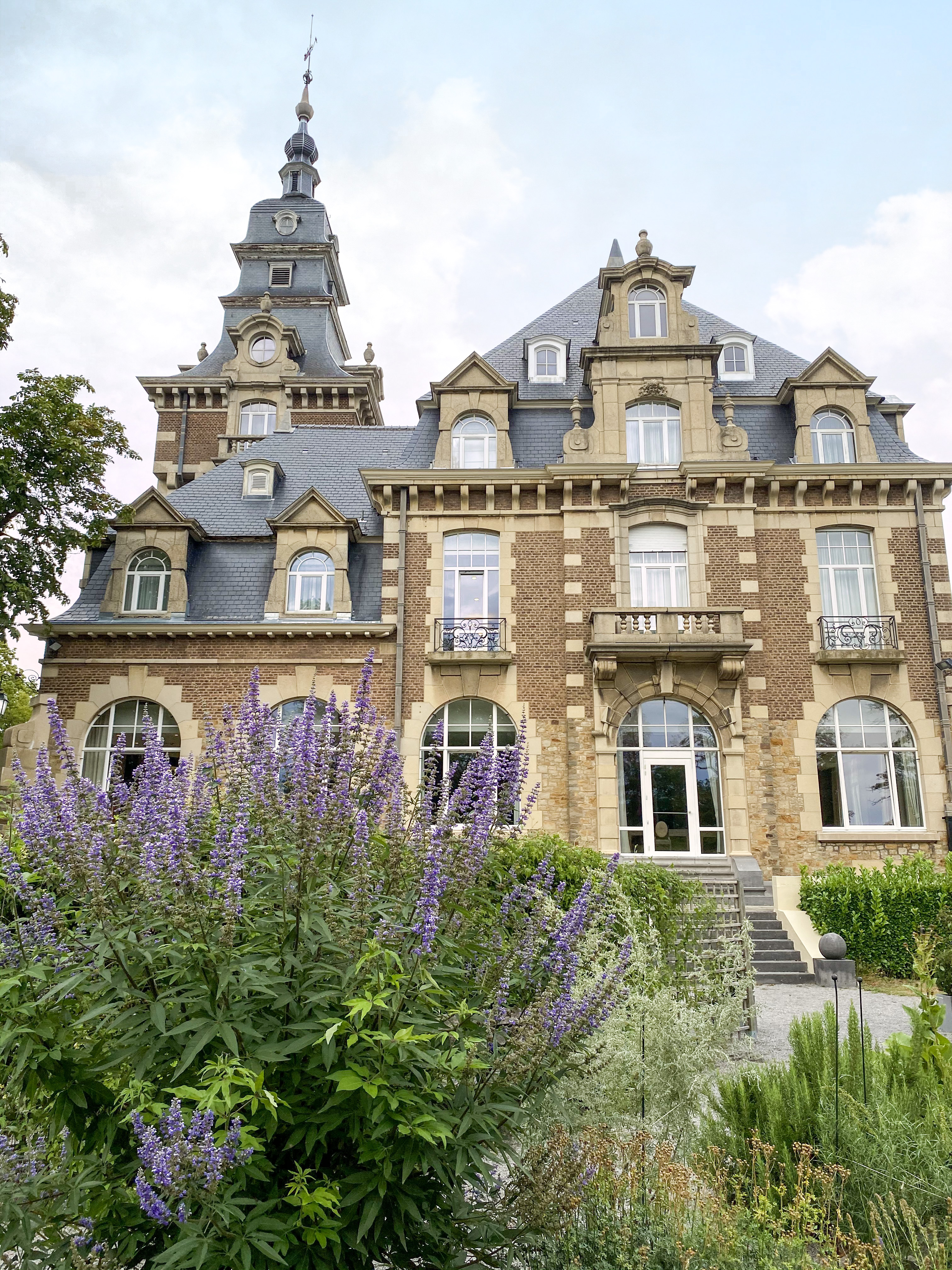 Like I said before, this itinerary was only a little introduction to the province of Namur. I would like to go back for a long weekend and explore more castles and cute little villages in the region. A full day in the city of Namur is also necessary to wander around the old town and see the sights, so that’s something you might want to take in consideration. I noticed that the city is undergoing mayor construction works, so I think it would be interesting to go back in a few years, to see how it turned out.