When people visit Belgium they often go to the coast or visit Bruges and Brussels. But have you ever been to Kortrijk? This cozy city in the south of West-Flanders is absolutely worth visiting. The city on the Leie, as Kortrijk is often referred to, was of big importance in Flemish history. Over the past ten years, Kortrijk has changed into a vibrant and creative city, with many trendy restaurants, coffee bars and unique shops. Also in the field of design, Kortrijk is a major player. Since 2017 the city is a member of the UNESCO Creative Cities Network. I figured it was about time to get to know the city a bit better. Here are my tips for a fun day trip in Kortrijk. 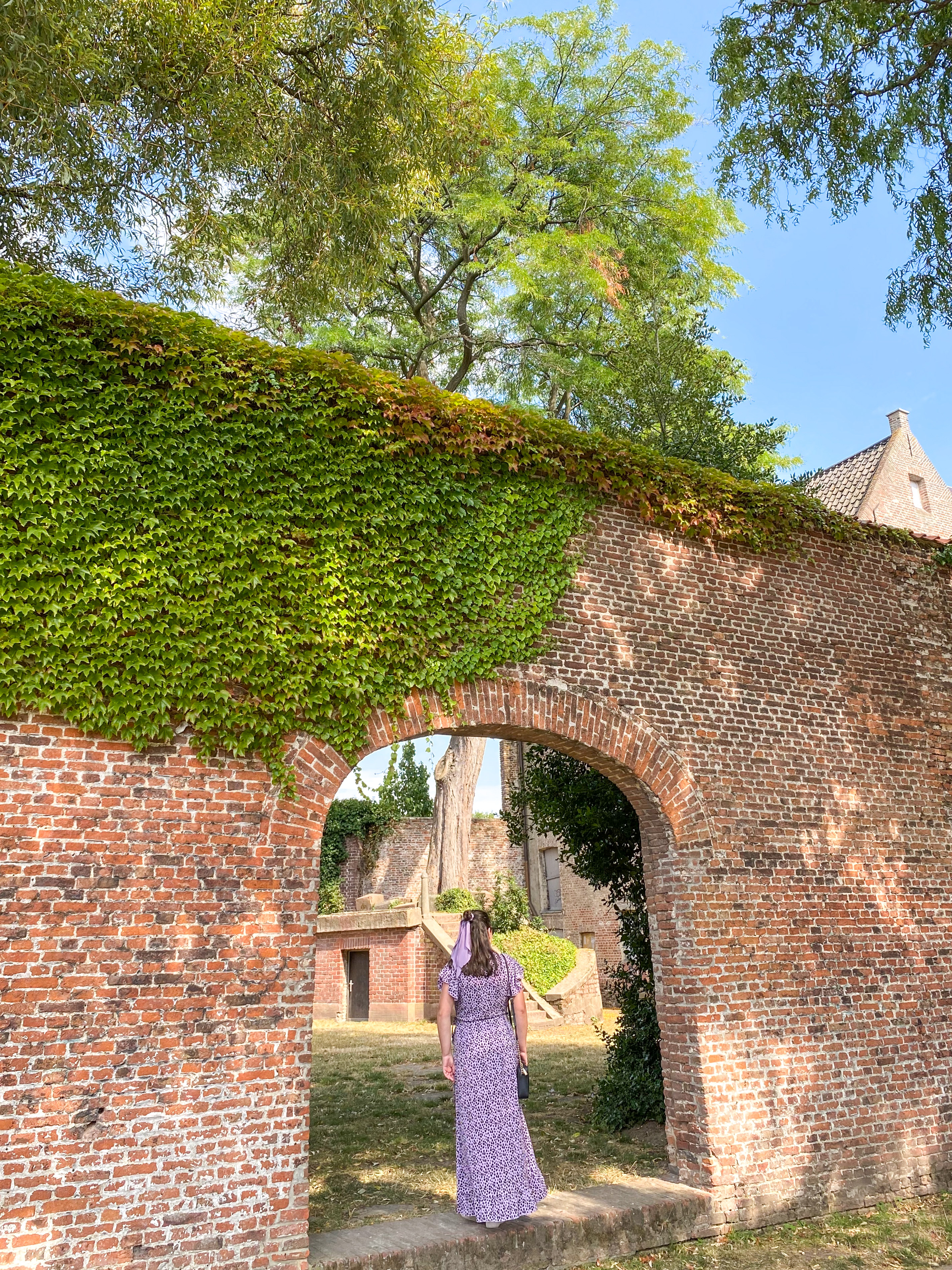 Shopping fun at K in Kortrijk and its surrounding streets

Kortrijk has been known as a pleasant shopping city for a long time, so the first stop of the day was the shopping mall ‘K in Kortrijk’, located in the heart of the city. K in Kortrijk opened in 2010 and has about 80 stores, going from big chains to independent stores. In case you don’t find what you are looking for, you can still stroll through the pedestrian shopping streets adjacent to the shopping center as well. Due to the Corona measures back then, we had to do our shopping solo, so I started my search for new sandals, while @the_exploring_chopstick looked for a new dress. My friend quickly found what she was looking for, but unfortunately I didn’t. And honestly, shopping isn’t much fun, if you have to do it alone right?! So, we decided to explore the city on a cultural level instead.

If there is one thing I can never ever get enough of, it’s croquettes. In Belgium we have ‘friteries’ practically on every corner, but a croquette bar doesn’t come around that much. Allo Croquette recently opened its doors and specializes in the tastiest croquettes. The menu is very elaborate; from croquettes with chicken to salmon. You can chose between two or three croquettes and even combine the flavors. I went for a classic Cheese Croquette, Meat Croquette and a Cherry Tomato one. All three were absolutely delicious. Allo Croquette has a very nice terrace on the ‘Jozef Vandaeleplein’ with a gorgeous view on the Saint Martin’s Church, but as we visited Kortrijk during the heatwave, we enjoyed our lunch inside. 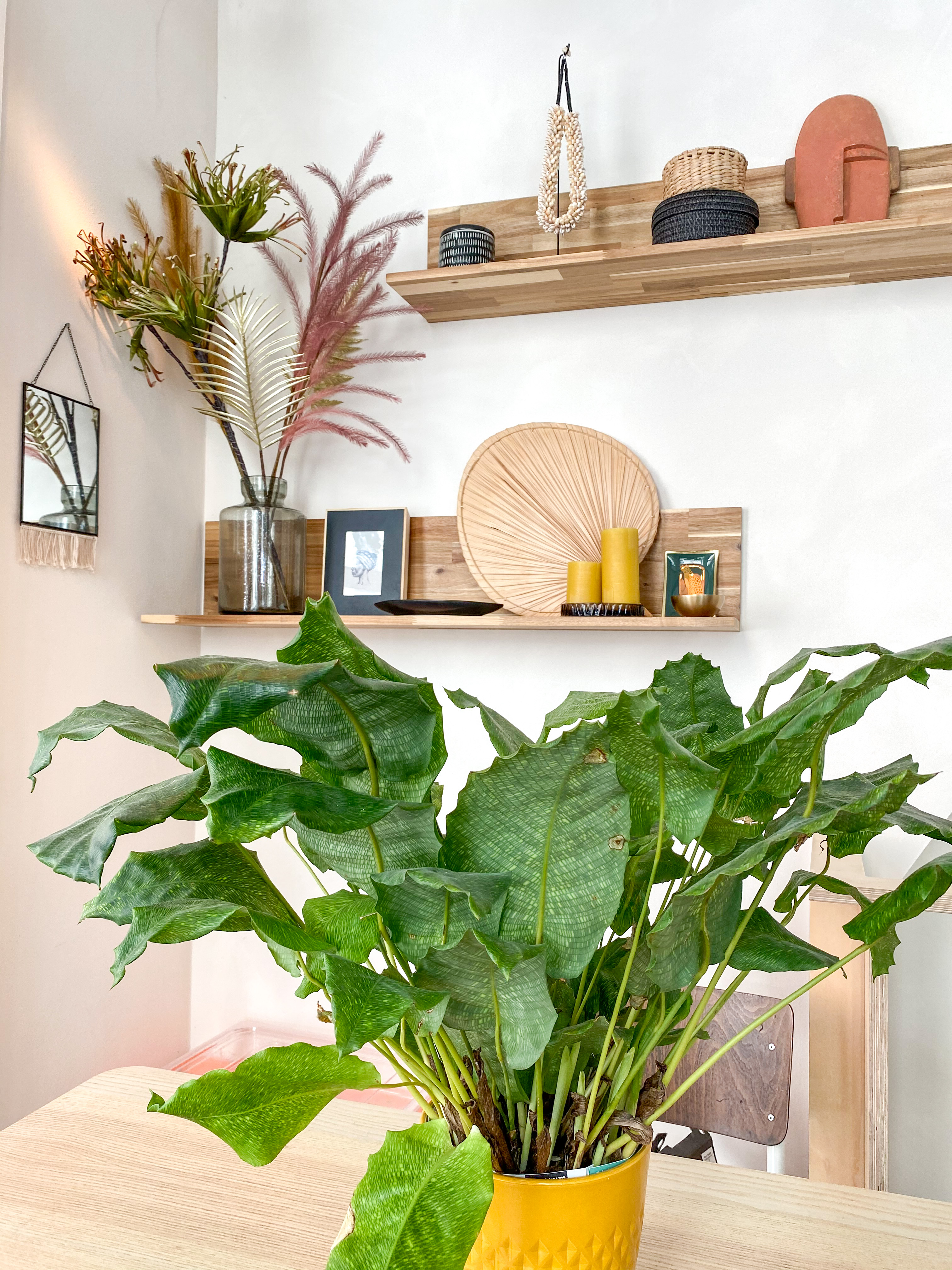 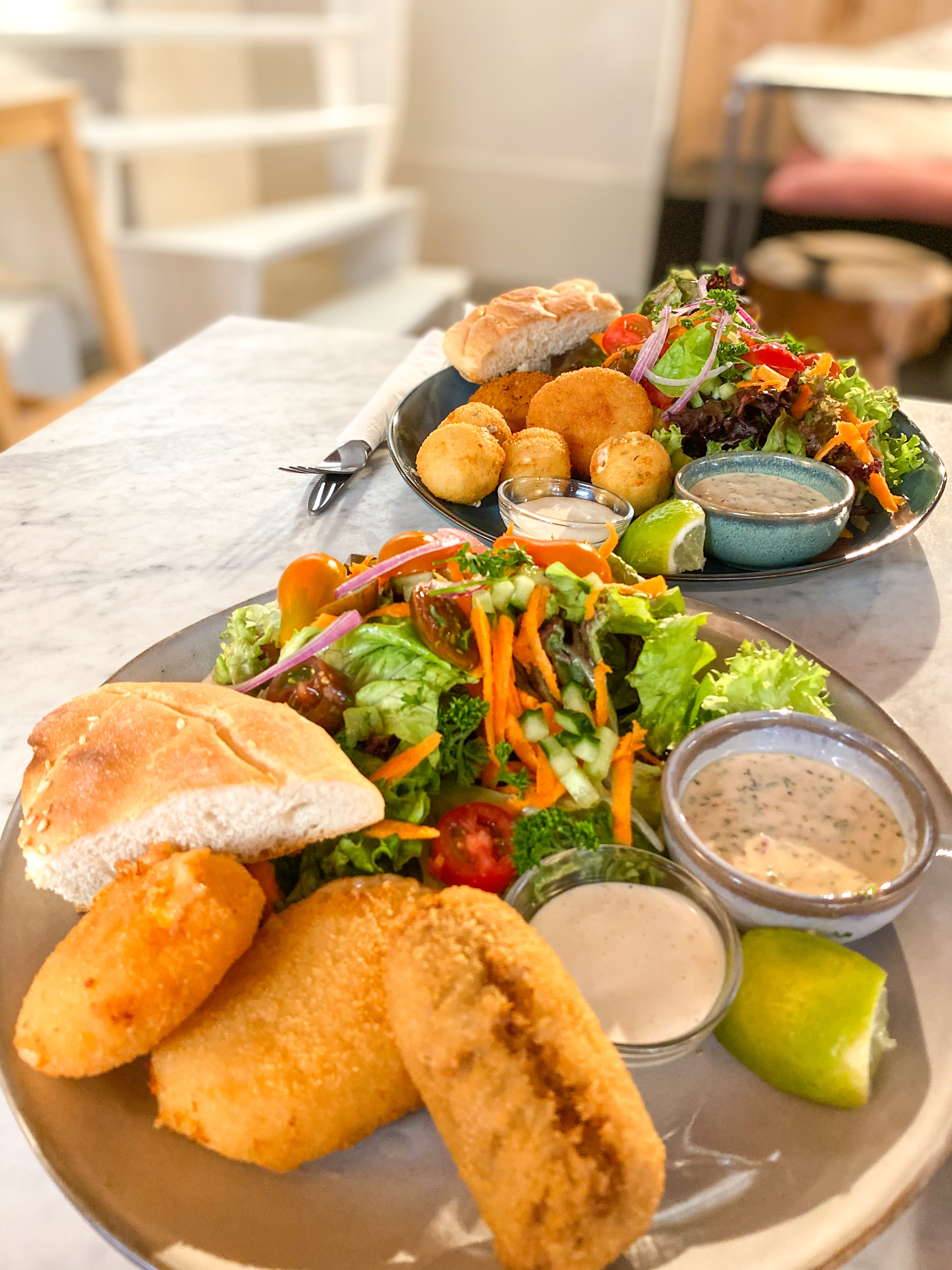 In Kortrijk 1302, we were transported back to 11 July 1302, when the Battle of the Golden Spurs was fought out on the Groeningekouter. As it such an important event in our history, I already knew a lot about the Battle of the Golden Spurs, but it definitely was a nice refresh course. I do think, that Kortrijk 1302 will be a much more fascinating museum for tourists outside of Belgium, as it gives a lot of insight on the Flemish identity and the origin of the Dutch-French debate. 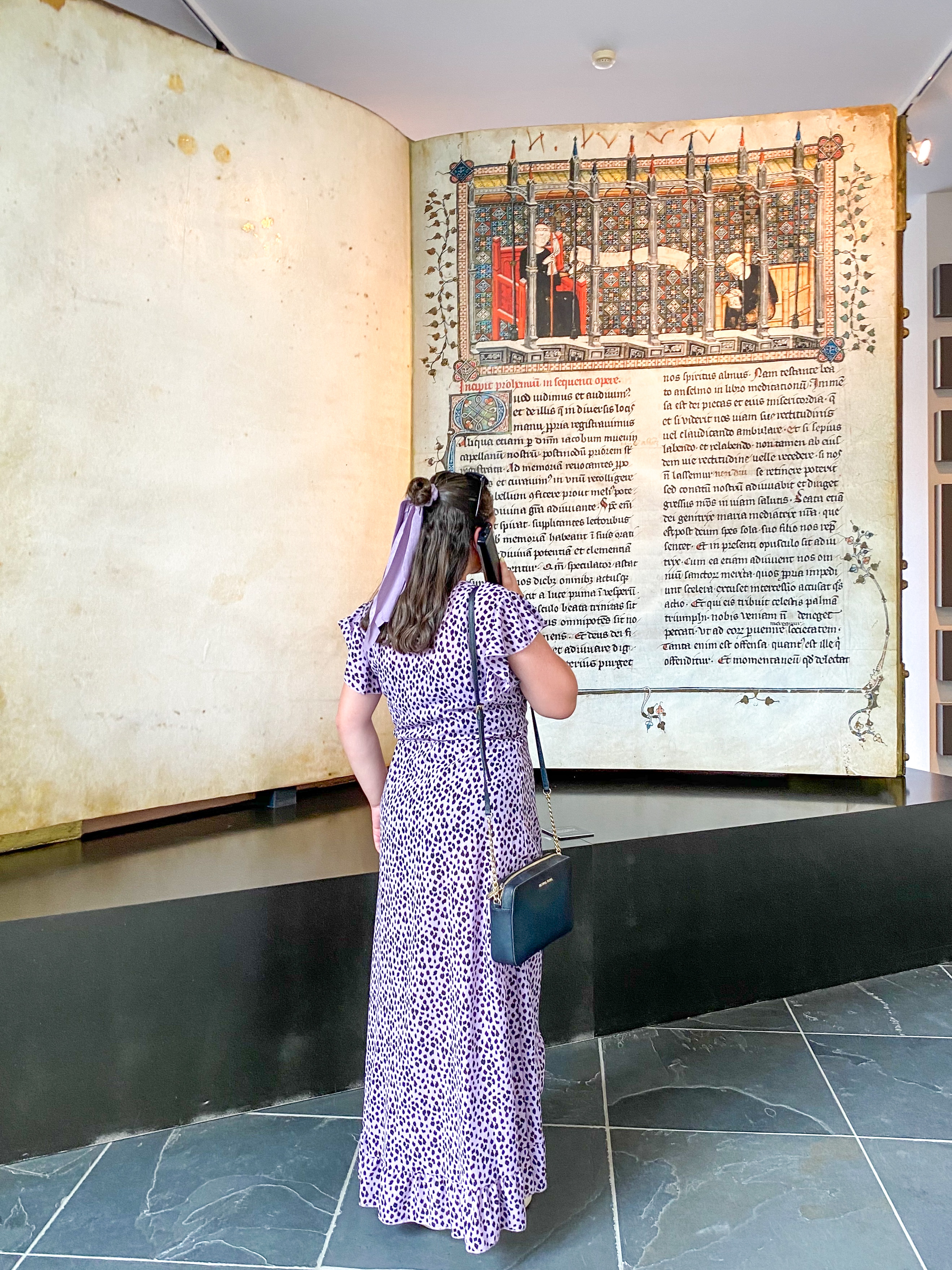 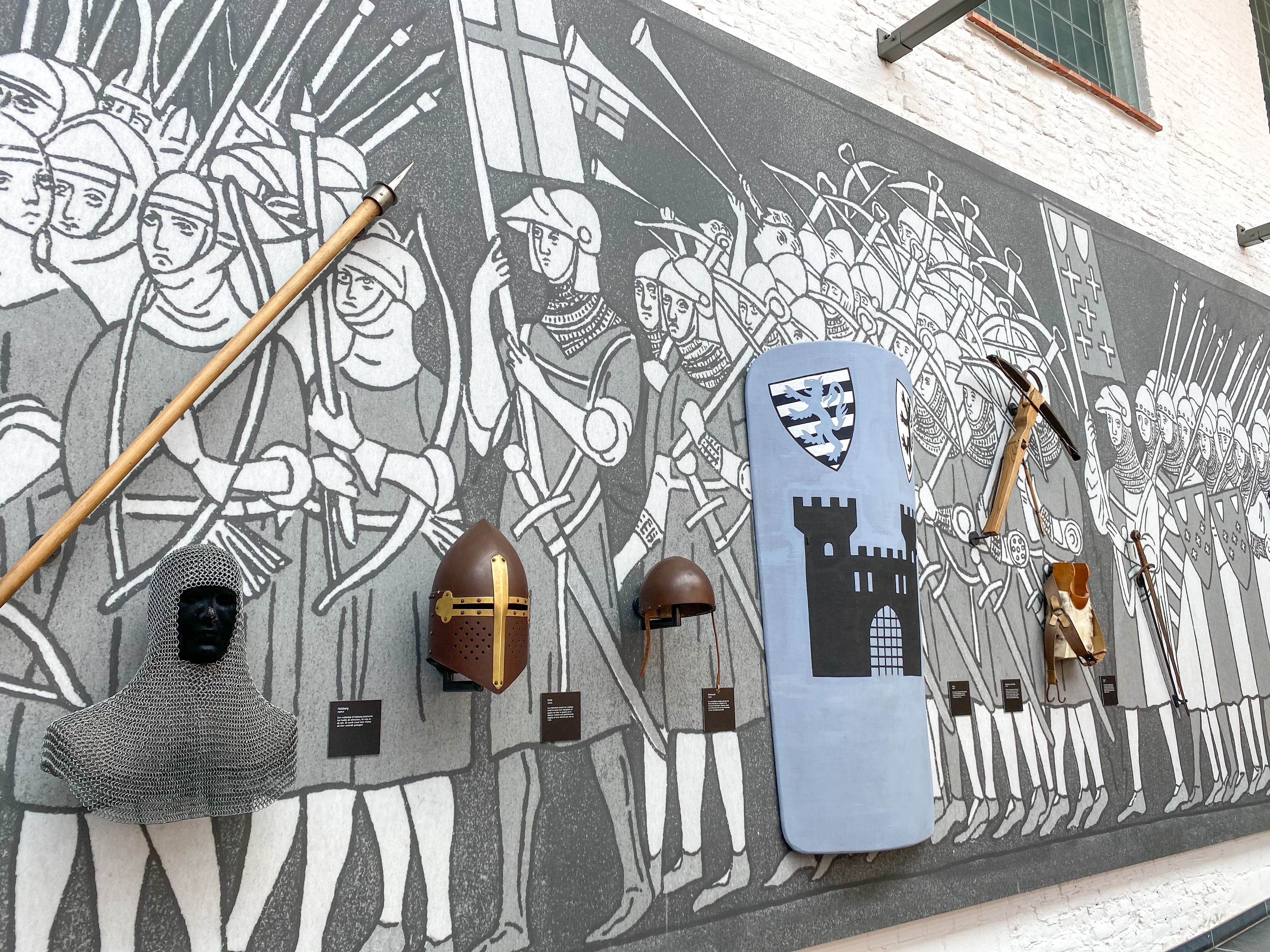 From Kortrijk 1302, it was short walk towards the béguinage, one of my favorite spots in Kortrijk. The Saint Elisabeth Béguinage was founded between 1238 and 1240 by the Countess of Flanders, Joanna of Constantinople. You can find her statue under a tree in the cozy courtyard. The béguinage has been on the UNESCO World Heritage List since 1998. 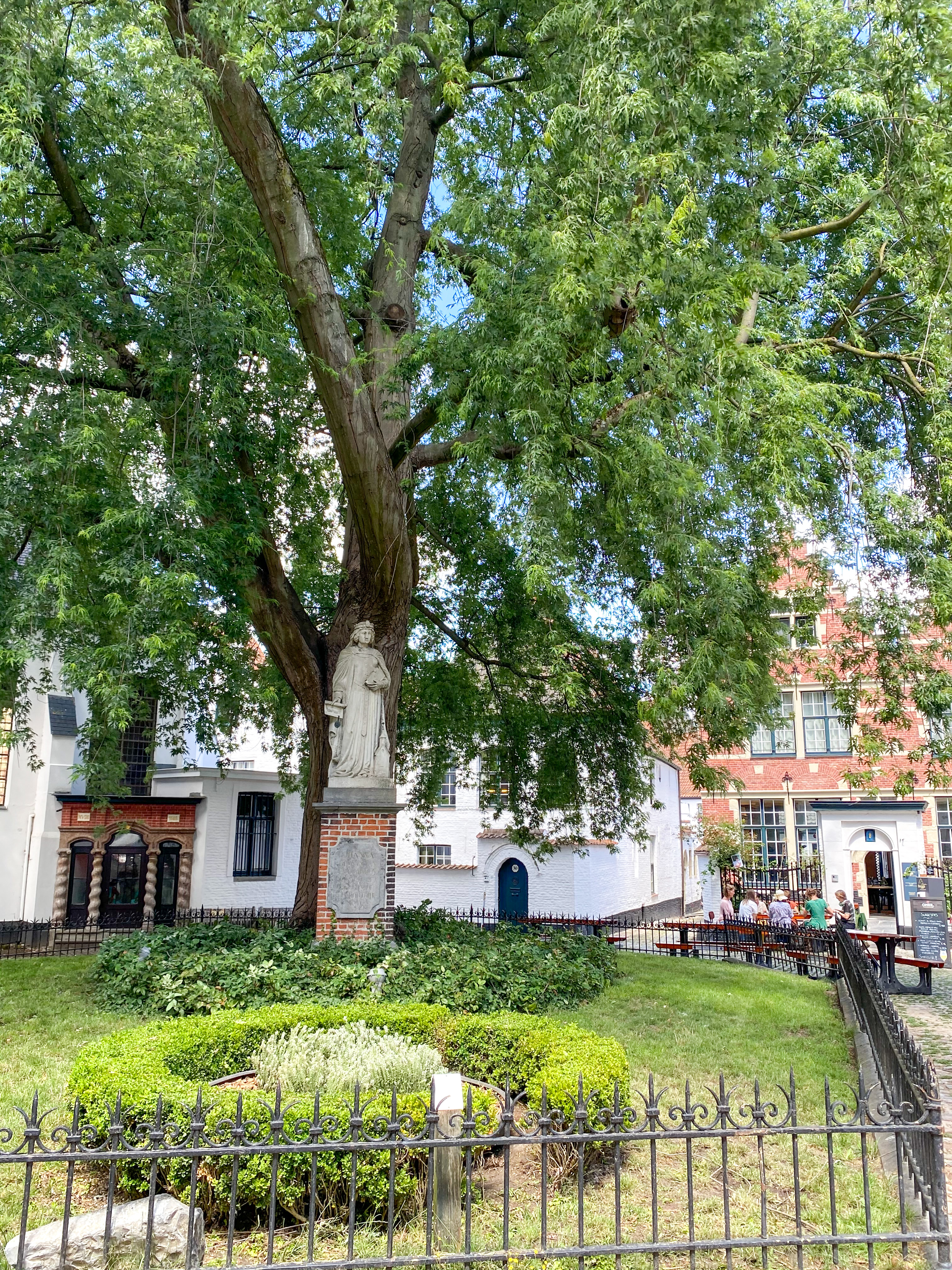 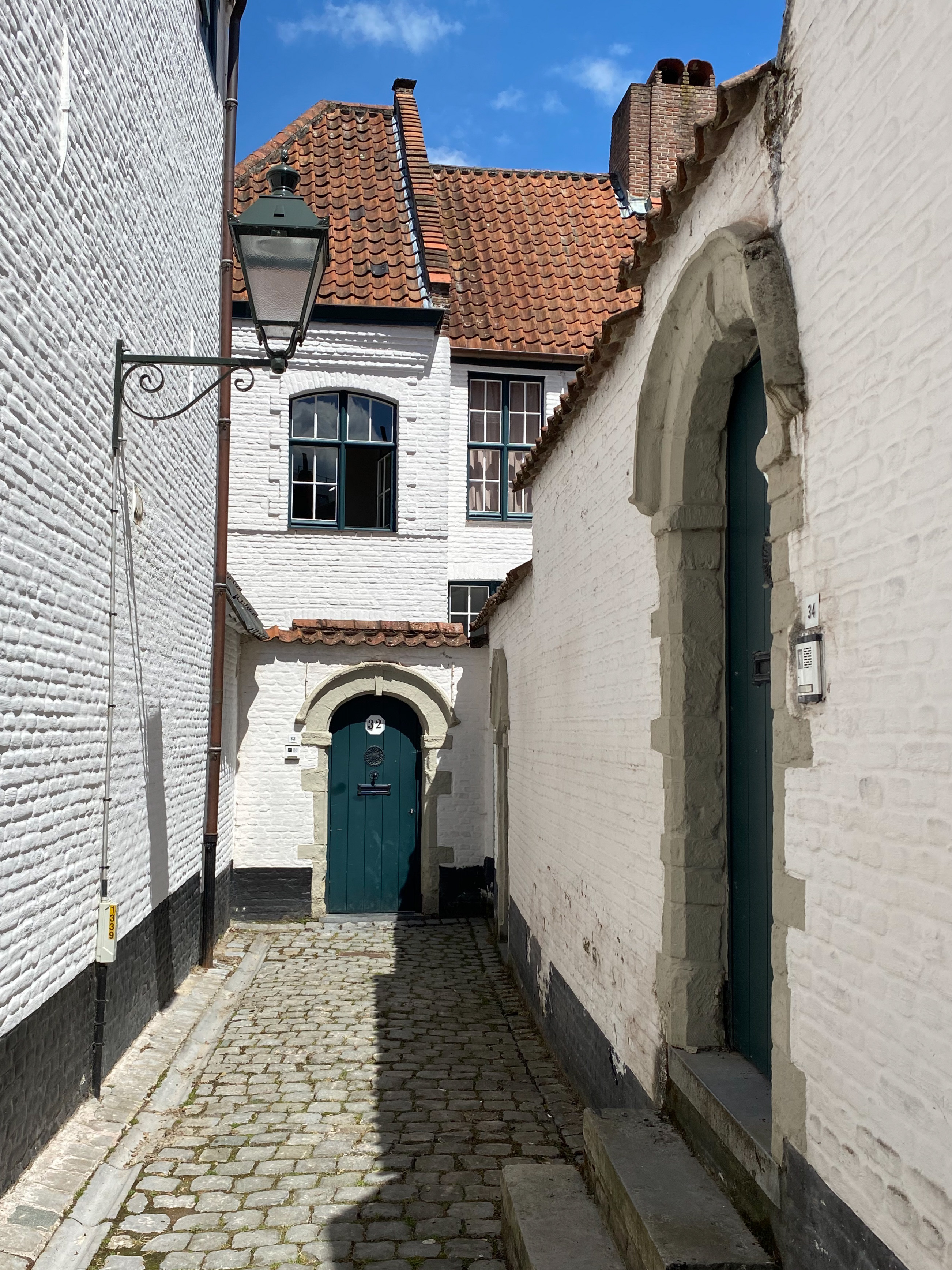 On the site there are a total of 40 houses dating from 1650. One of the houses has been decorated like it was back in the days. Because of that you get a clearer image on the daily life of the beguines. Not much further you will find the Matthew Chapel where the Beguines attended mass. 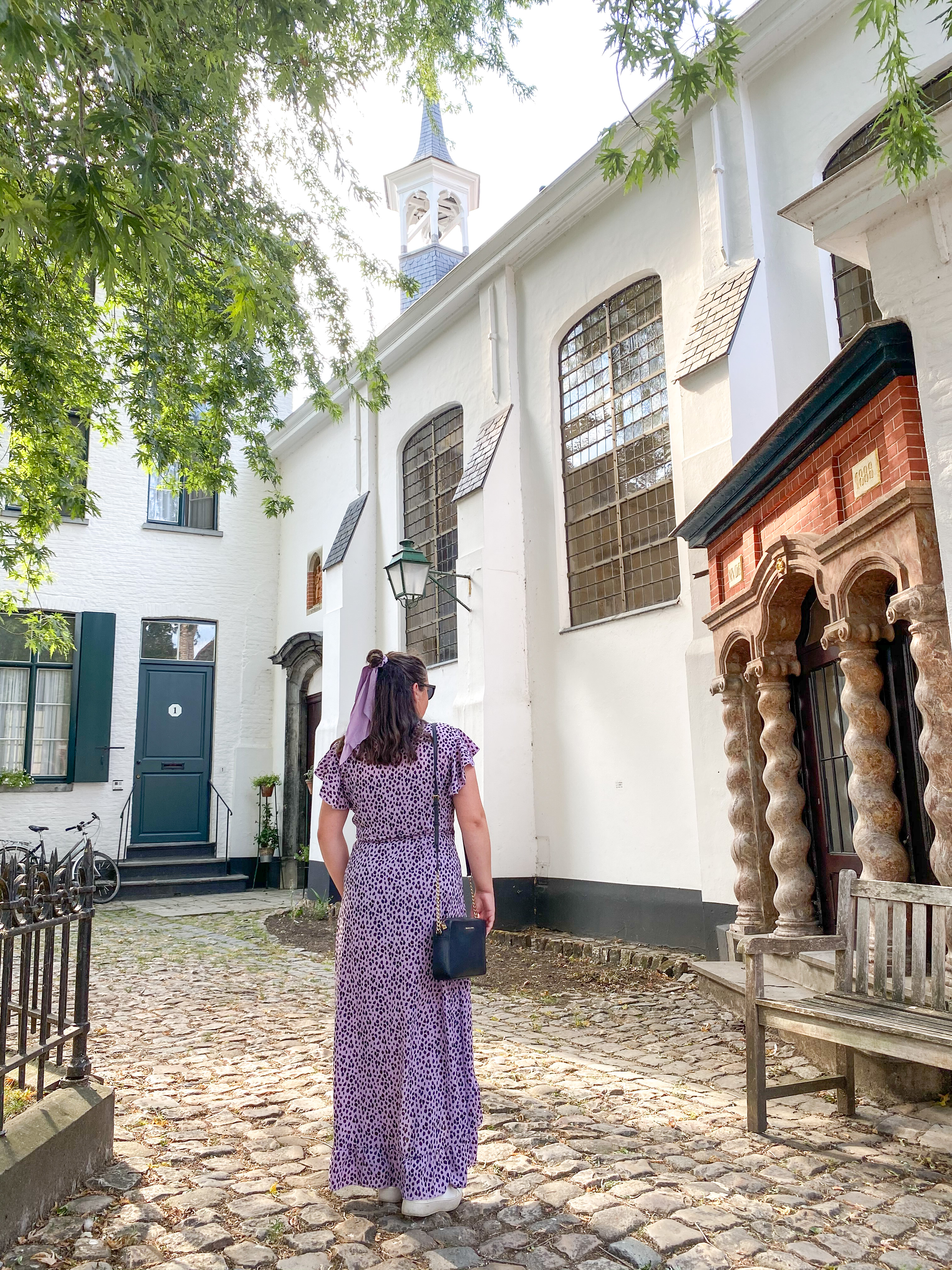 The experience center in the Sint Anna Hall is worth a visit. The ‘béguinage’ phenomenon has been interpreted afresh with a mixture of authentic heritage and modern media techniques. 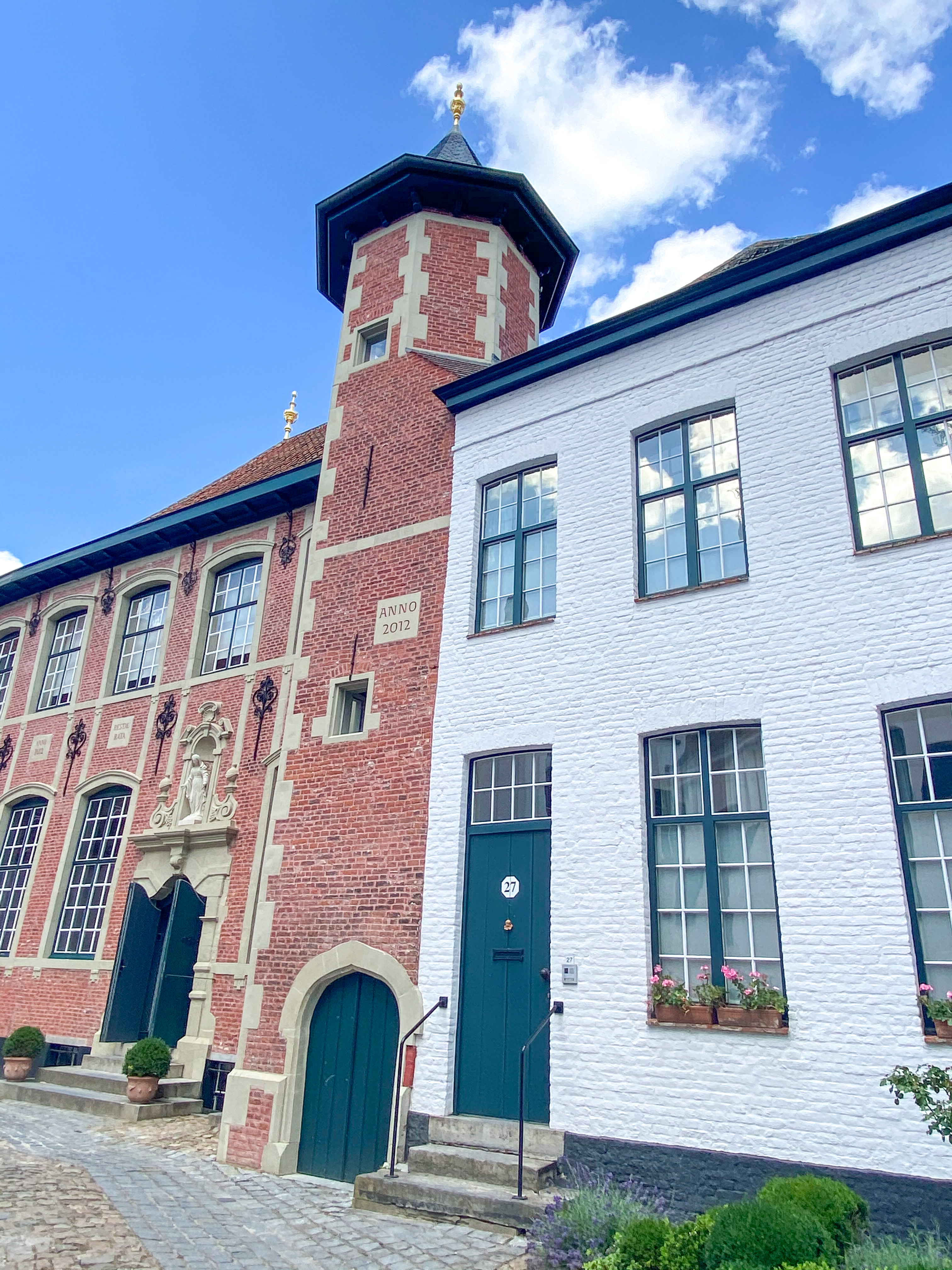 The house with the double stepped-gable belonged to the ‘Grand Dame’. Nowadays you can find restaurant Huyze Begga here. We were really happy that we found this spot and with it, some shade on a hot summer day. The location is simply extraordinary! I read online that the homemade cakes are divine. But as we were planning on having dinner not much later, we only ordered some refreshments. Still, it’s definitely something to keep in mind for the next time I’m visiting Kortrijk. 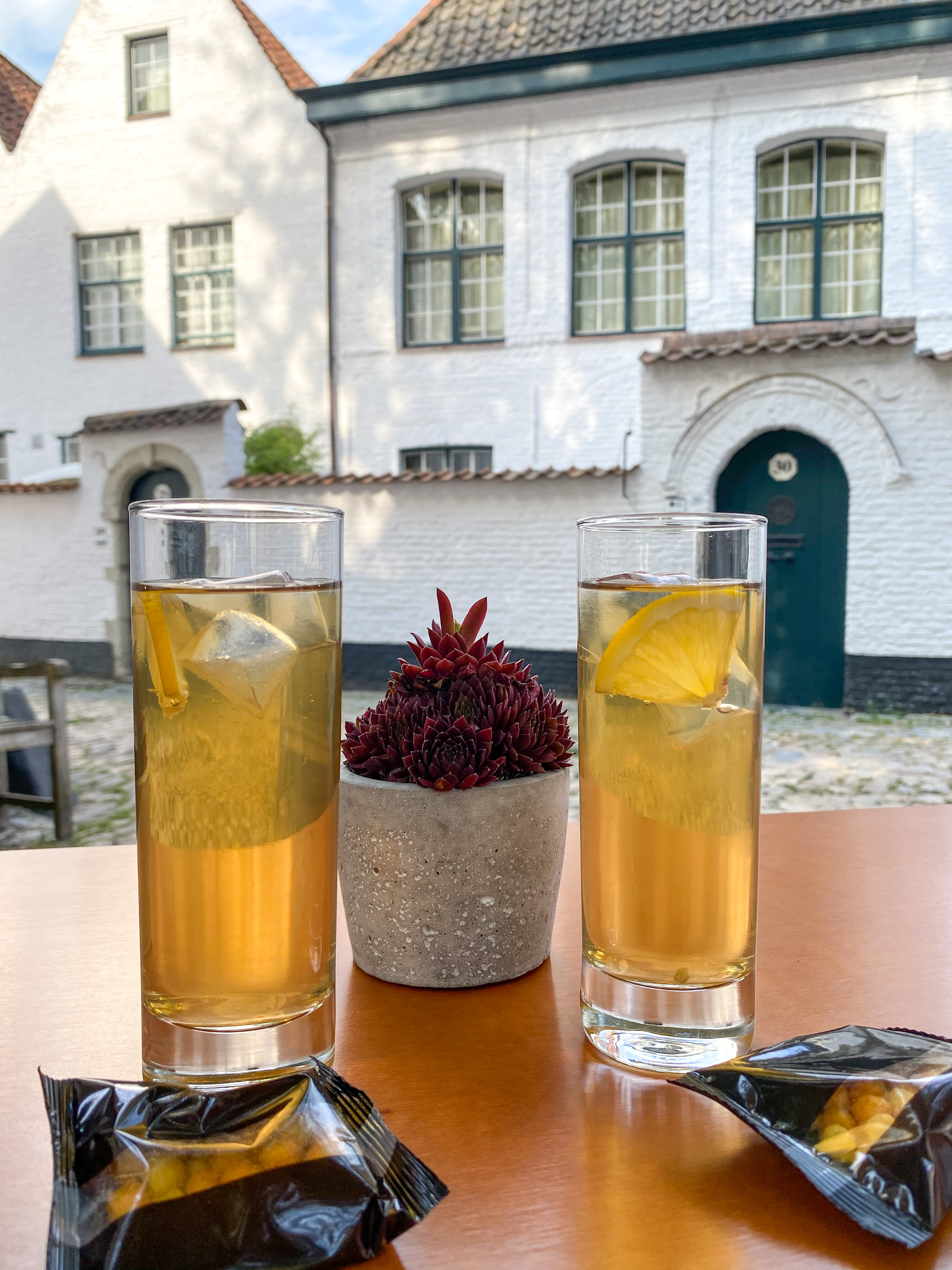 When I think of Kortrijk, the Broeltorens immediately come to mind. I can’t help it, but it’s one of the most iconic sights in the city. The Broel Towers are the only remains of the old fortifications. The southern ‘Speytorre’ was constructed in 1385 to control traffic on the Leie. The northerly ‘Inghelburghtorre’, dating back to 1415 was used as a weapons depot. 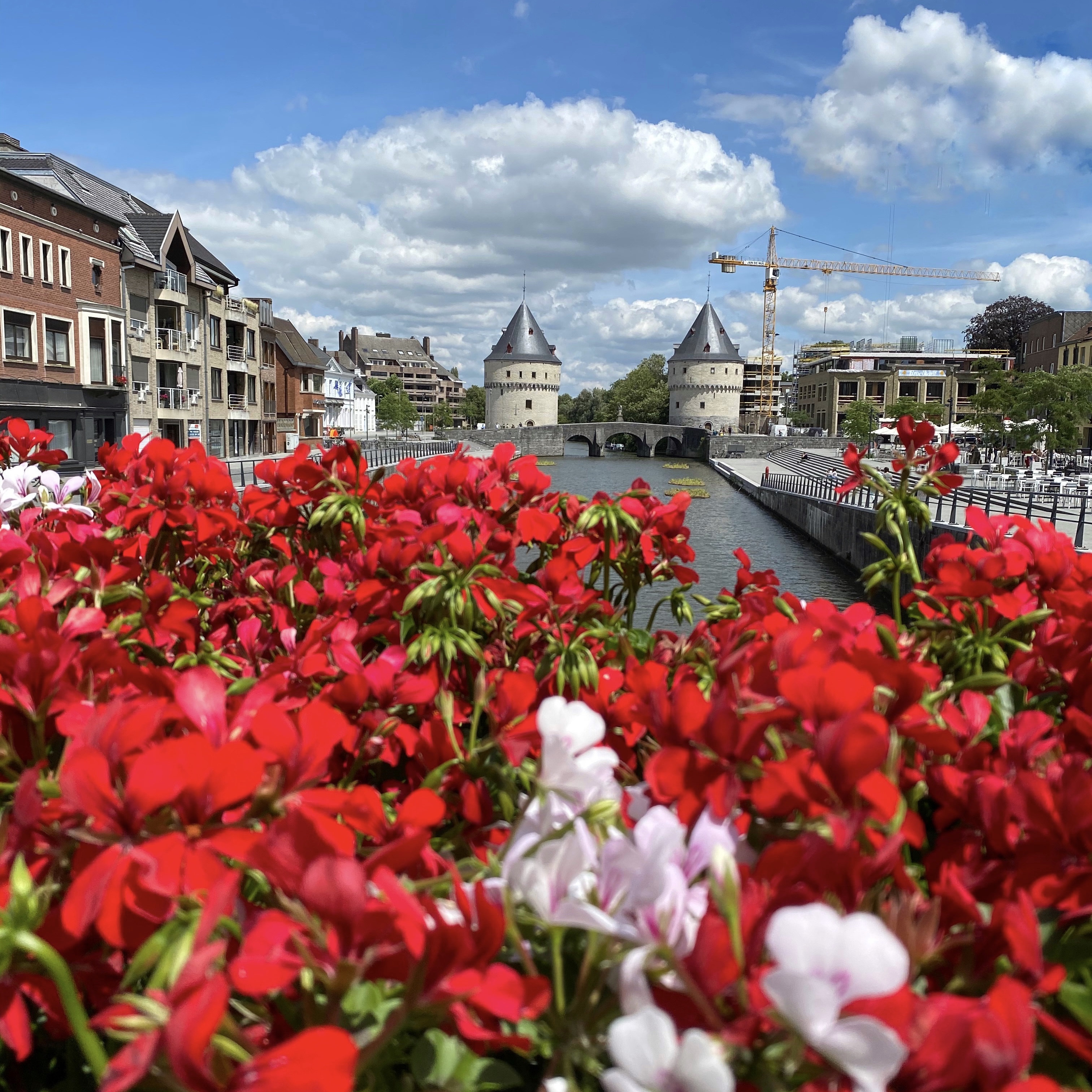 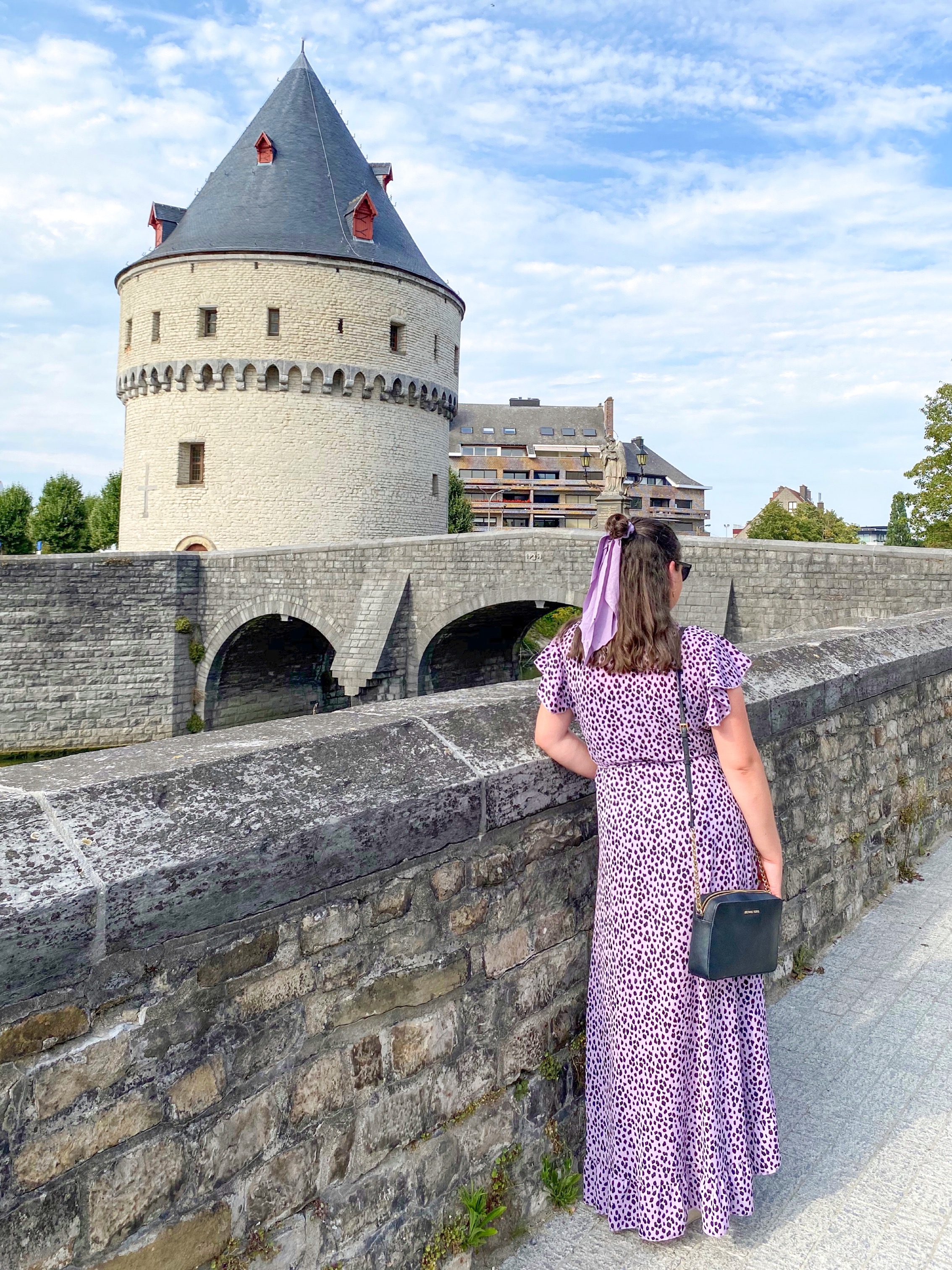 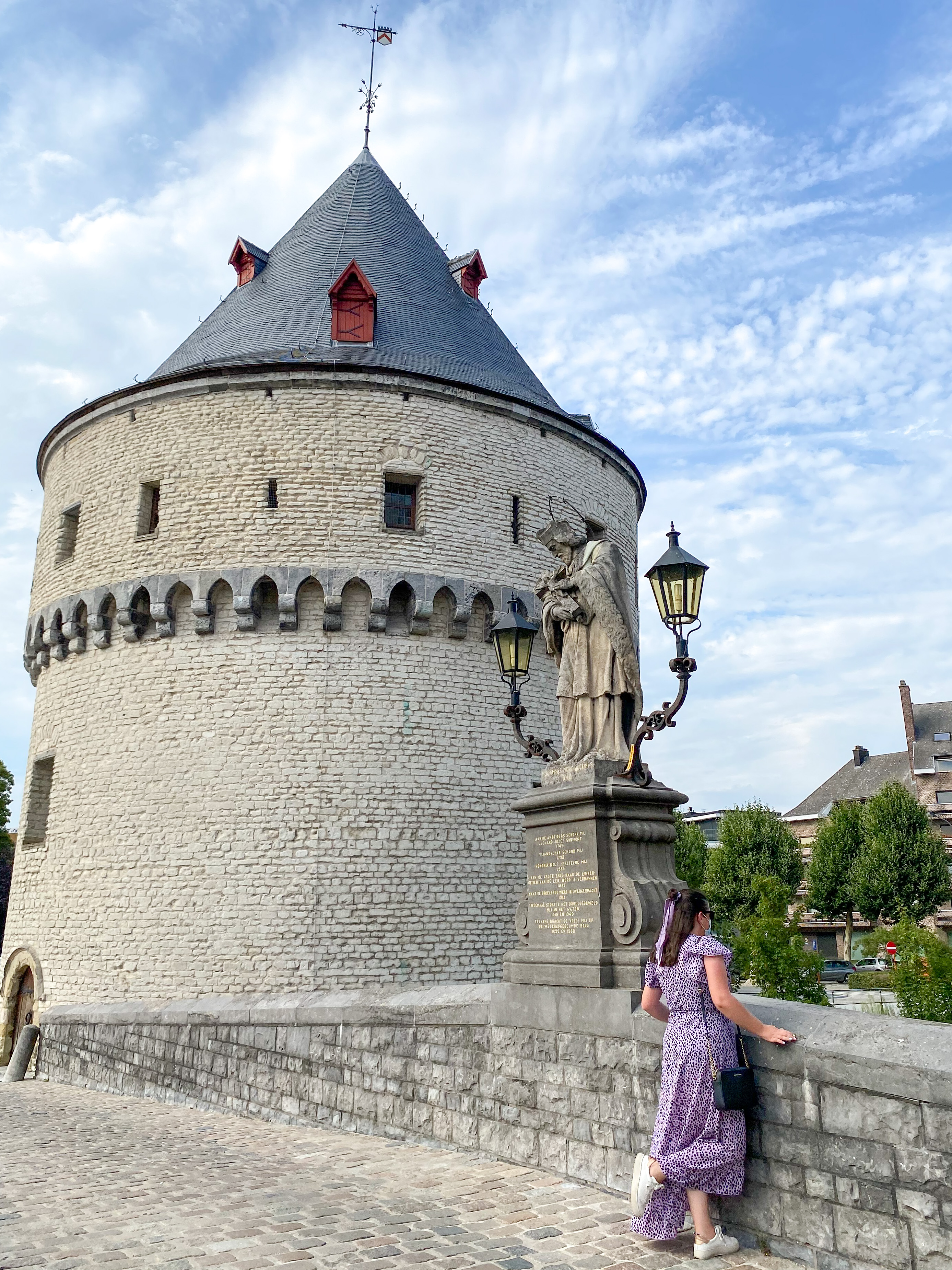 Recently, the Leie Quays were lowered. Since then the area around the Broel Towers became one of the hotspots of Kortrijk. And honestly you guys, it’s also one of my favorites places in Kortrijk. Who doesn’t enjoy people watching in the sun or a drink on a terrace with a lovely view right?! 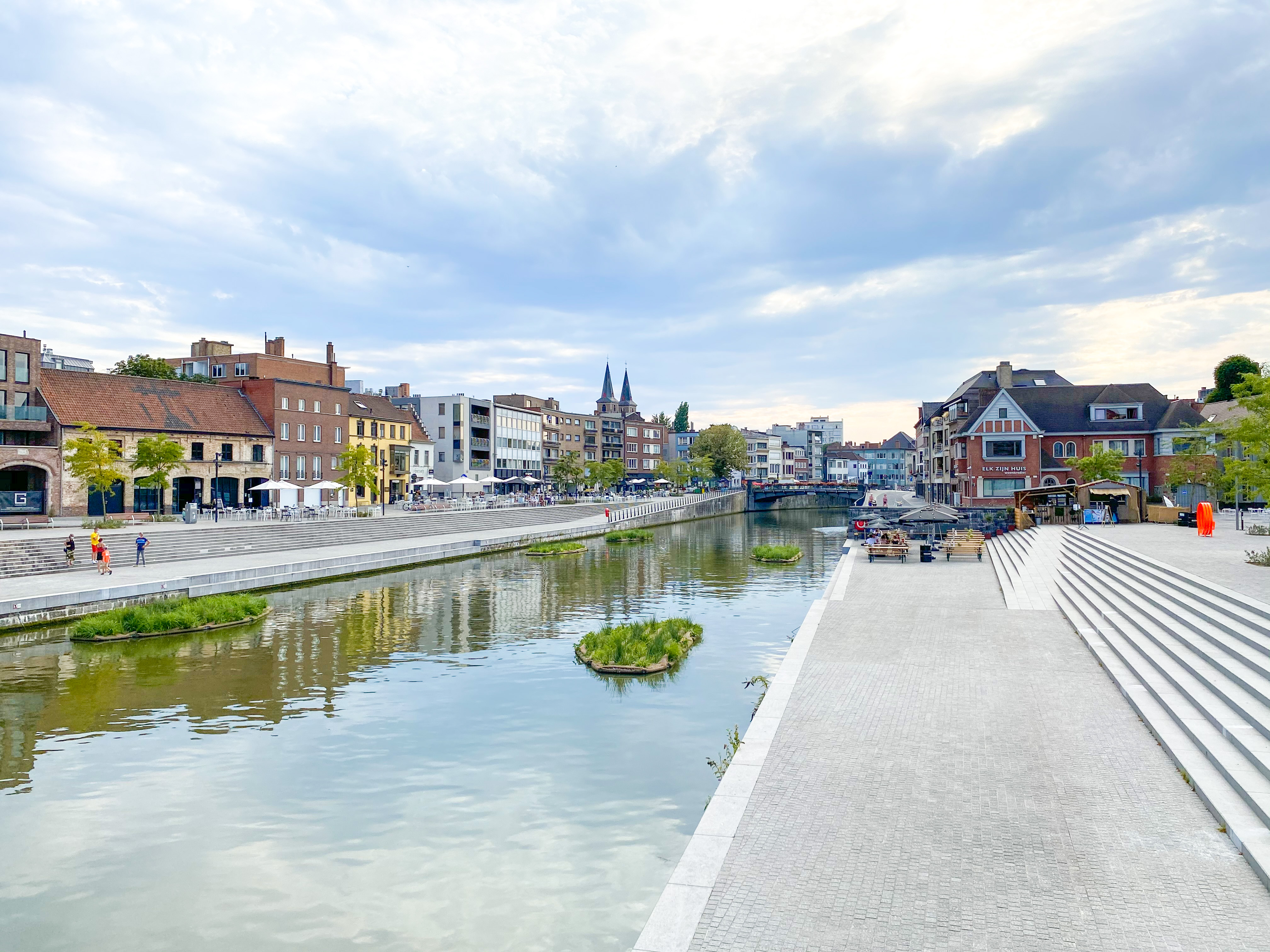 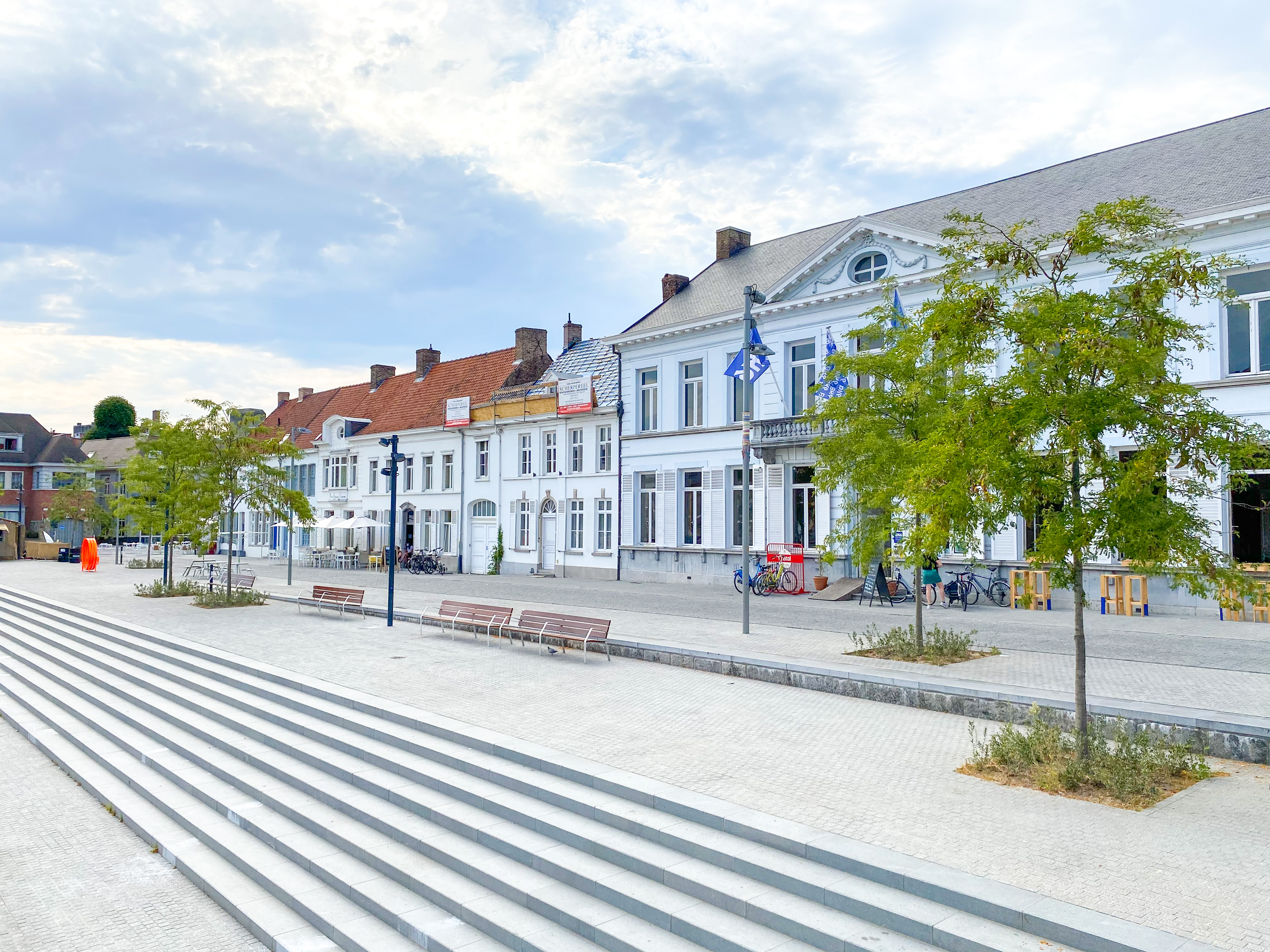 Split Kortrijk was on my list for a while, so we decided to have dinner there. In this trendy restaurant food-sharing and cocktails are taking center stage. The Lavender Lemon Twist Mocktail is one of the best mocktails I had ever had. So yummy! On the food menu you will find a mix of International dishes. We ordered a plate of Bruschetta Split to enjoy with our mocktails, while we continued drooling over the rest of the menu. 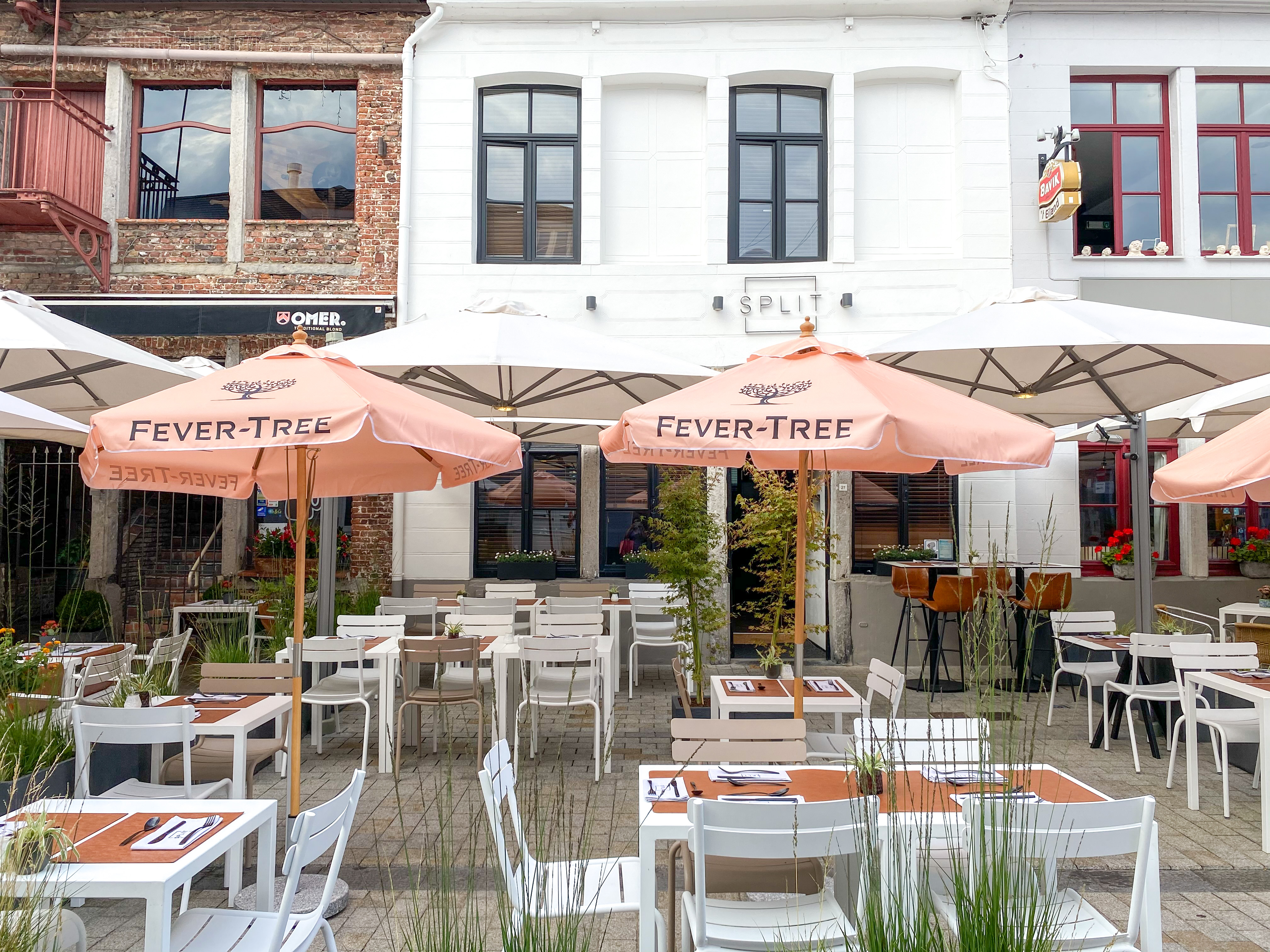 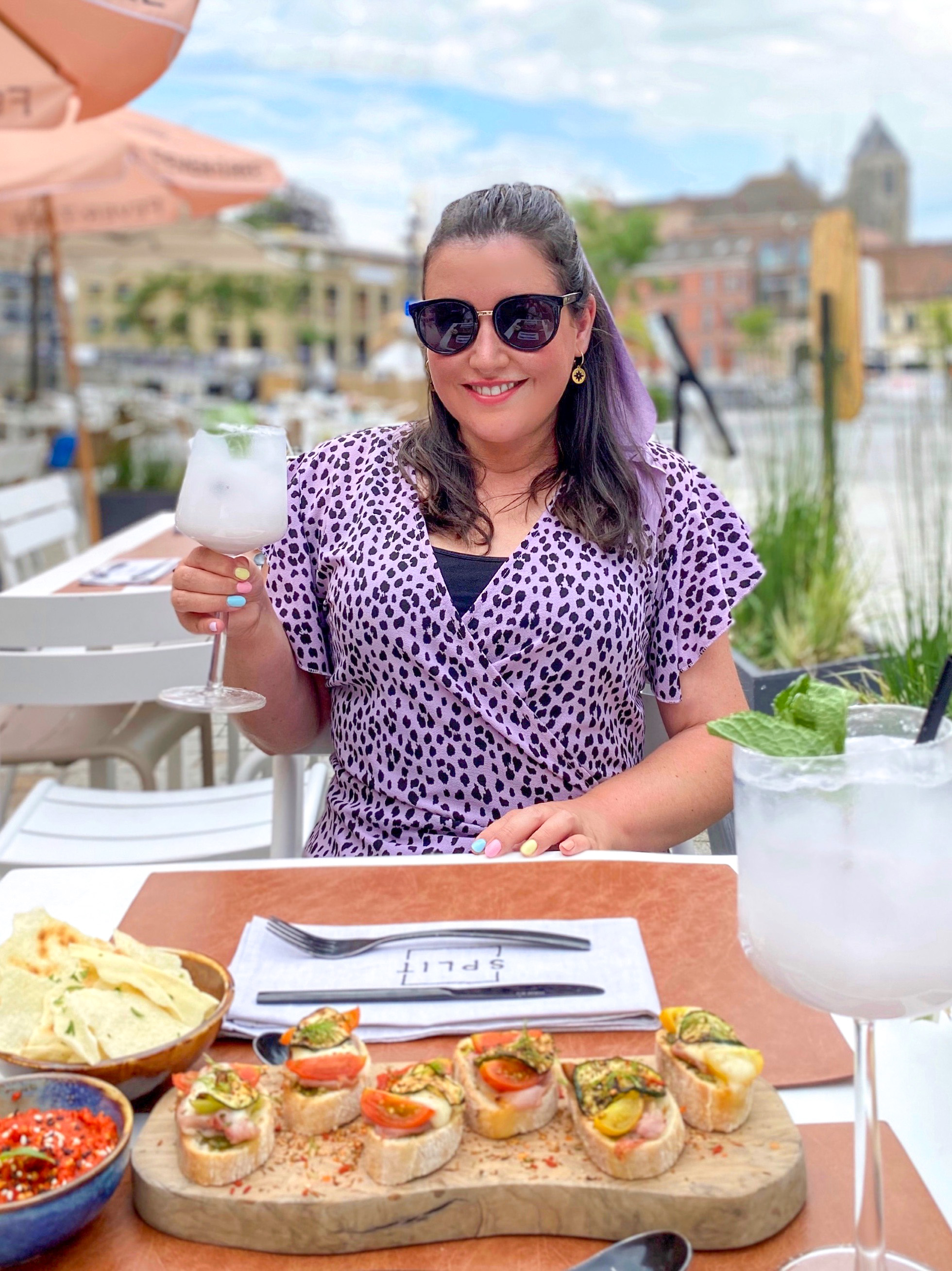 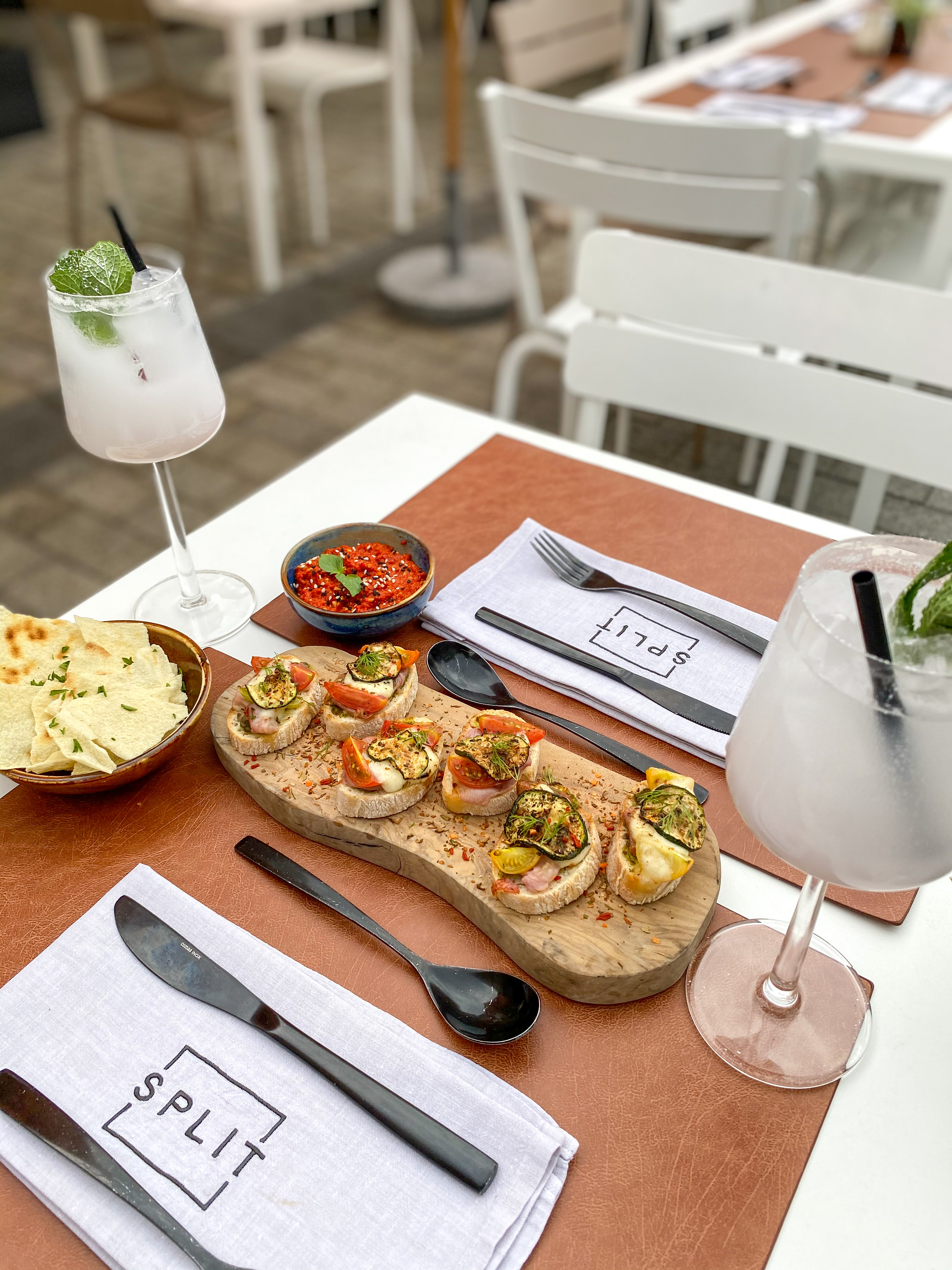 Everything seemed so promising, that it was hard to choose. In the end, we decided upon the Tuna Tataki and Vitello Tonnato. We chose Rosemary Potatoes and Pearl Couscous Salad for side dishes. The entire meal was so good! So if you are looking for a nice restaurant in Kortrijk, don’t look any further, I have found the perfect spot for you guys! 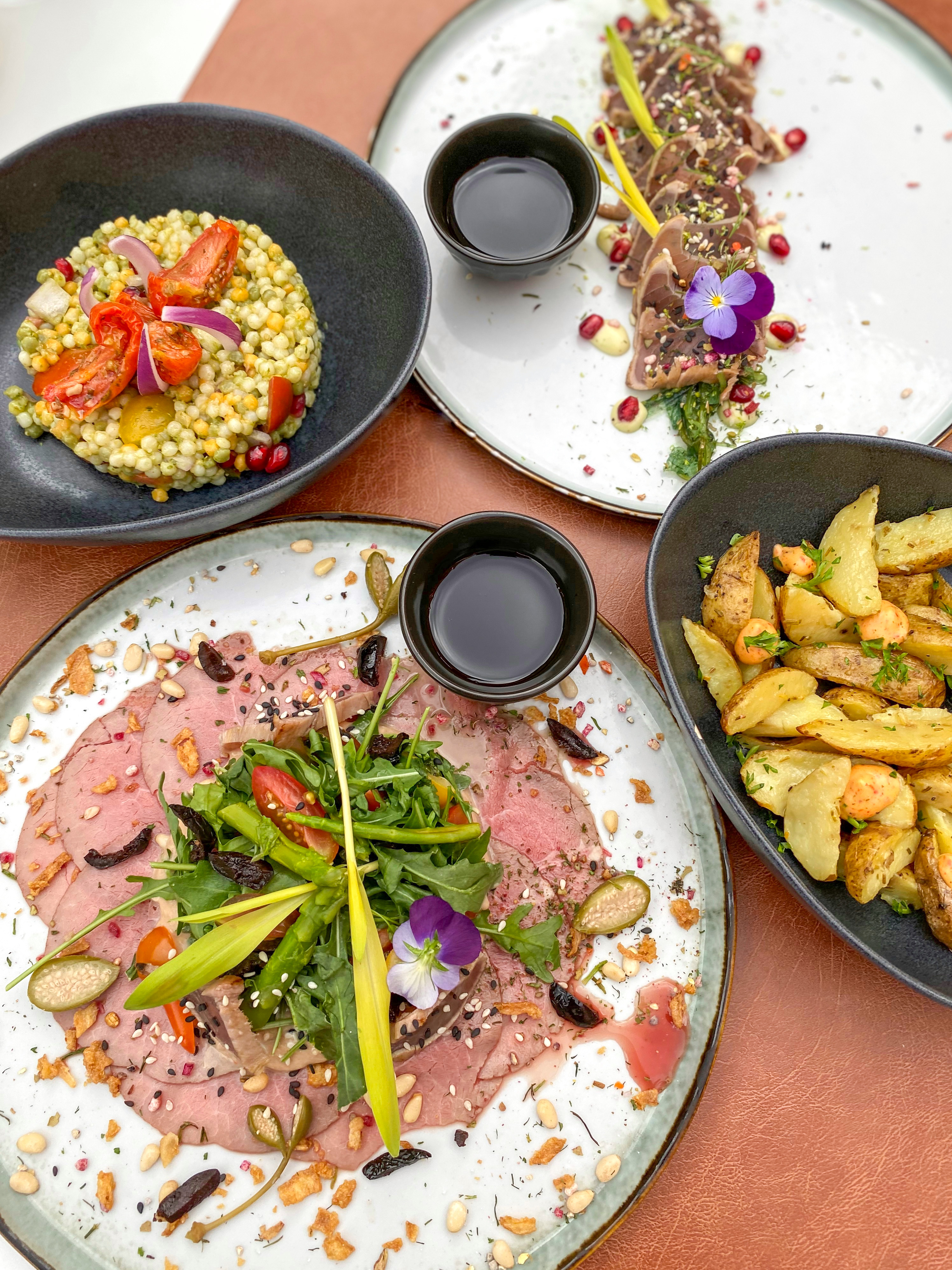 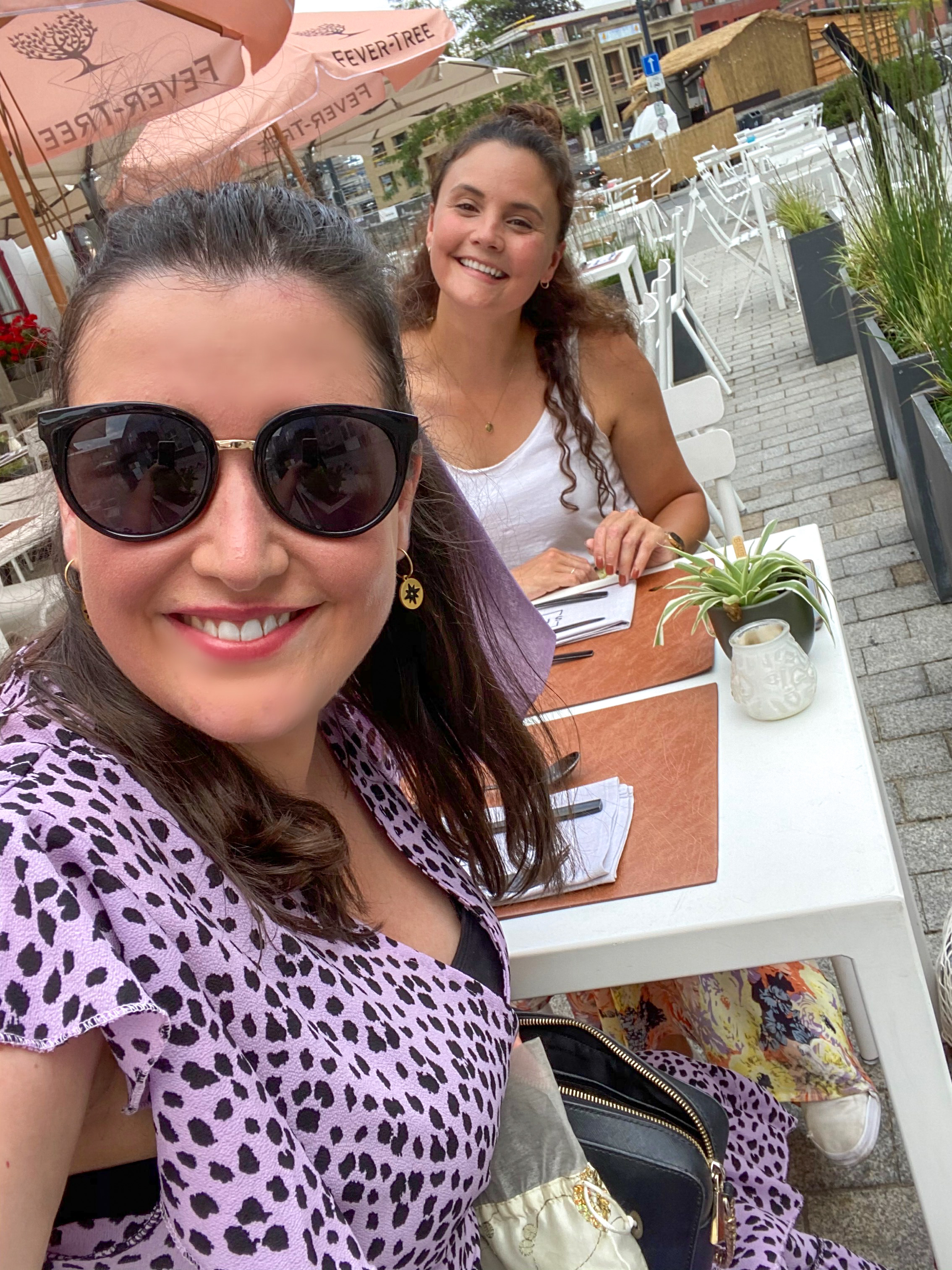 Nightcap at the Grote Markt

Before heading back home (or hotel, if you are staying longer), enjoy a drink on one of the many cozy terraces on the Grote Markt. Besides restaurants and cafés, you will spot the gorgeous late gothic City Hall and the medieval Belfry. 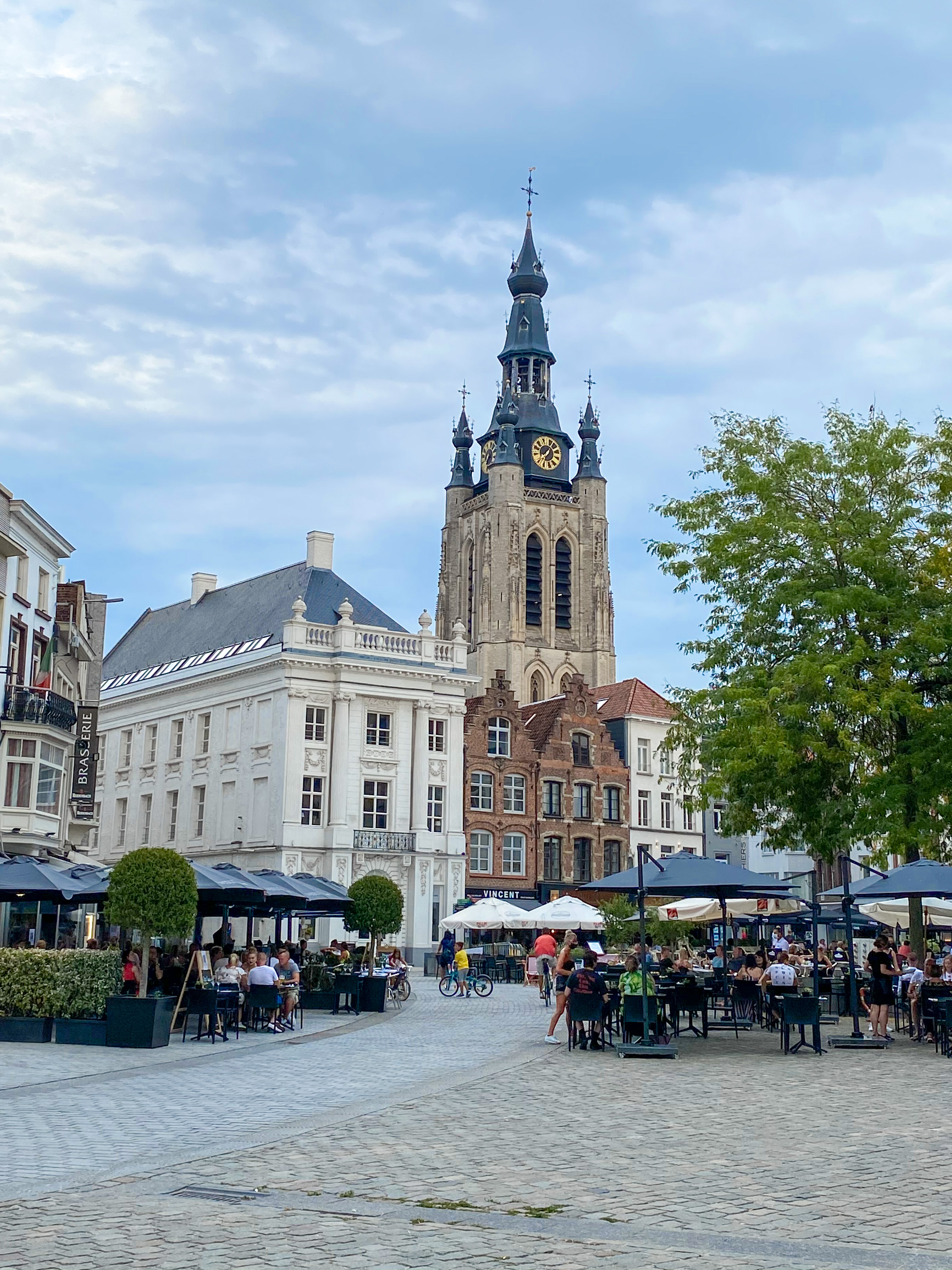 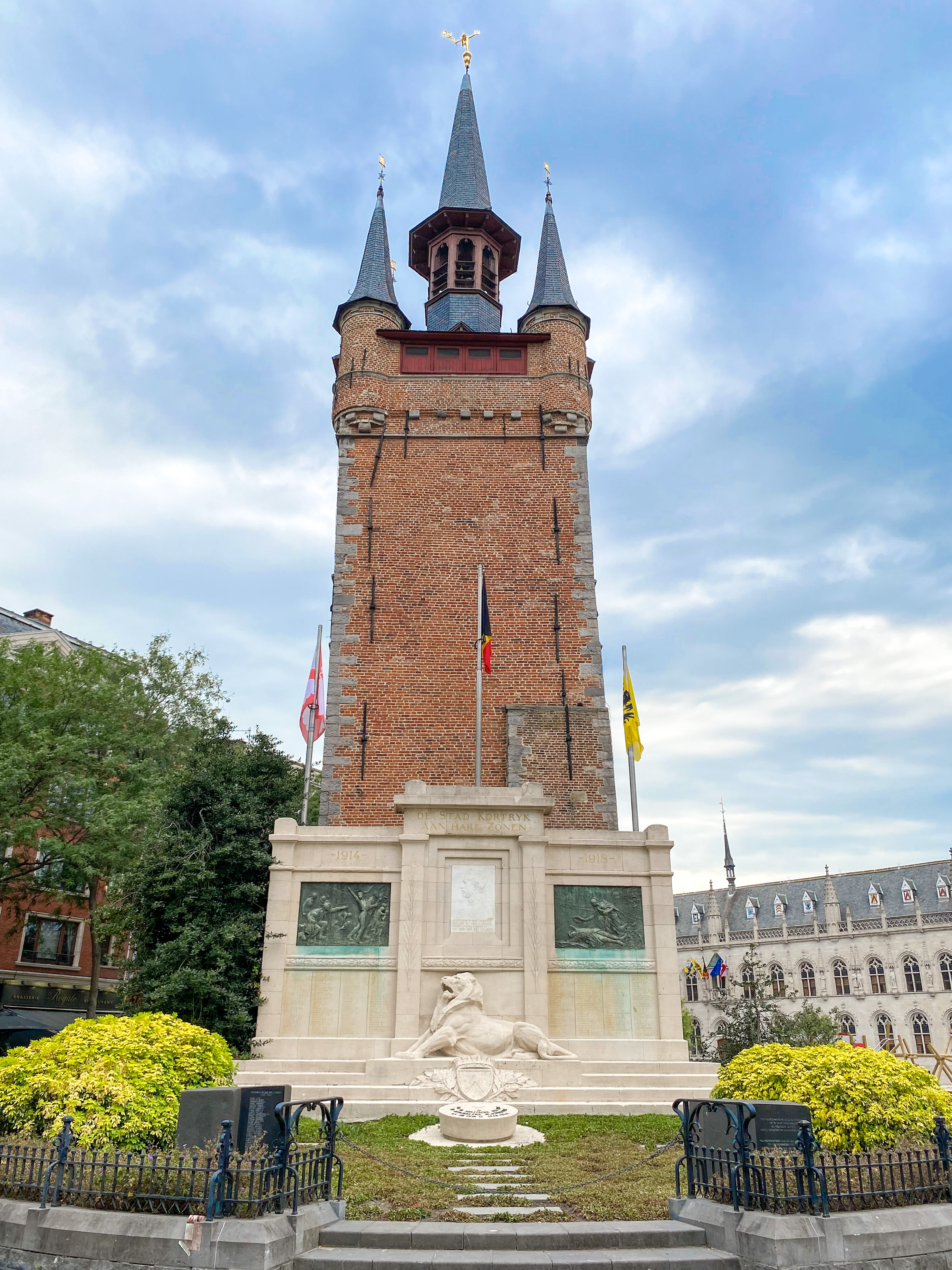 I kind of feel that we would have covered a lot more ground (like Buda-Island for example) if we visited Kortrijk on a normal day. It was about 38 degrees out and the fact that you have to wear a face mask all around the city didn’t make our situation better (but safety first you know). We spend a lot of time chilling in the shade at the Béguinage. Time we would have otherwise used to discover other parts of the city. But hey, it’s not far, I’ll definitely will be back. 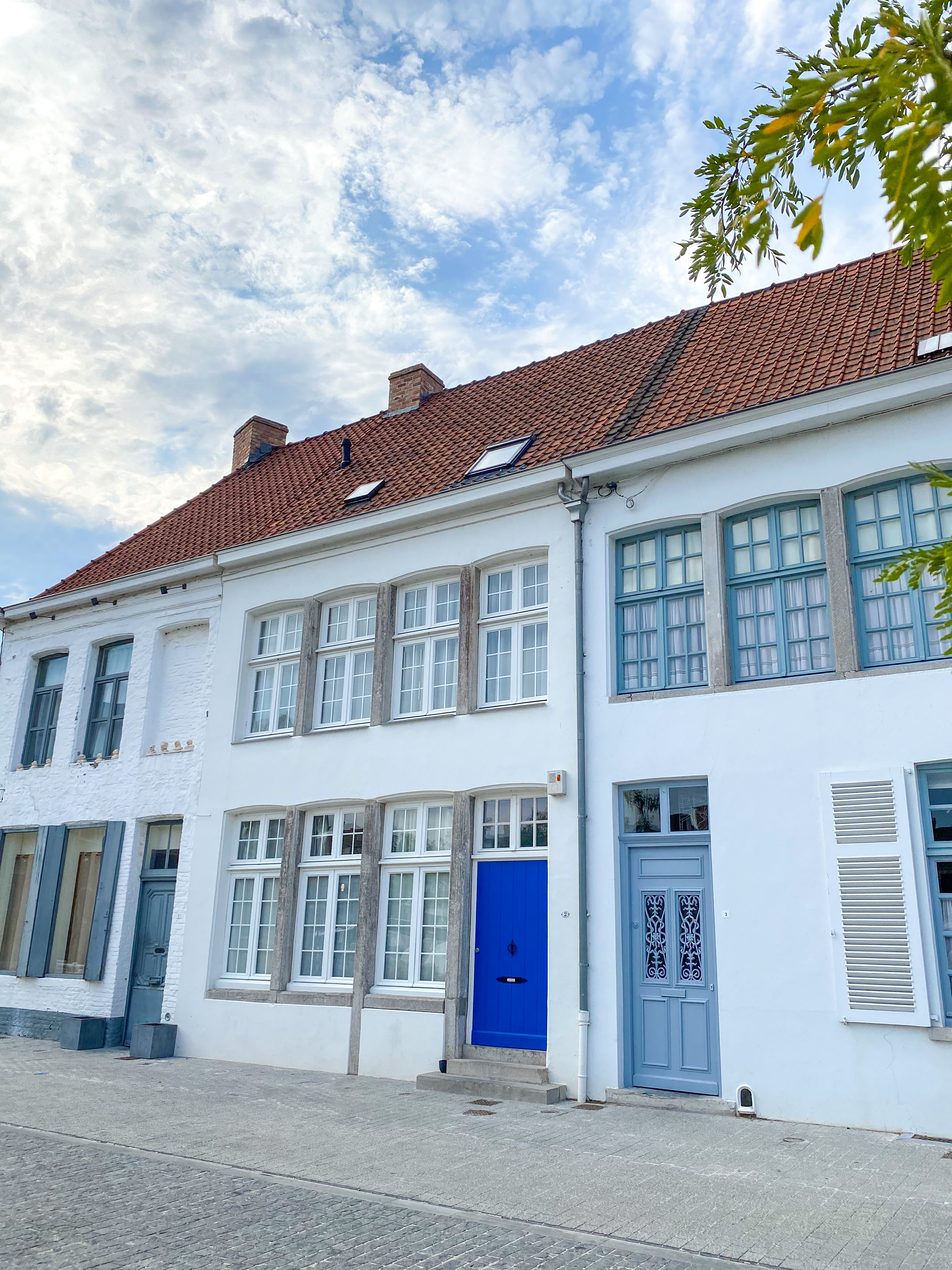