When planning a staycation or city trip to Flanders, Hasselt is very often forgotten. It’s true, unlike other Flemish cities (Antwerp, Bruges or Ghent), Hasselt doesn’t have a long list with famous landmarks you have to scratch of your list. However, that doesn’t mean it’s not worth your while! Believe me, as the capital of Limburg, Hasselt has everything for a successful city trip or day out. Hasselt is one of those city’s that you have to experience, wander around its streets and chit-chat with the locals to fully understand its charm. Fashionistas will love the exclusive boutiques and hip concept stores spread across the city. You will encounter the most cool street art around every corner. And also foodies are in for a treat. Because in terms of food, Hasselt is the place to be. In Flemish, Hasselt is known as ‘De Stad van de Smaak’, which means the city of flavor, so that must count for something right?! But why don’t I share with you guys my tips for a fun two days in Hasselt, so you can go out and explore for yourself. 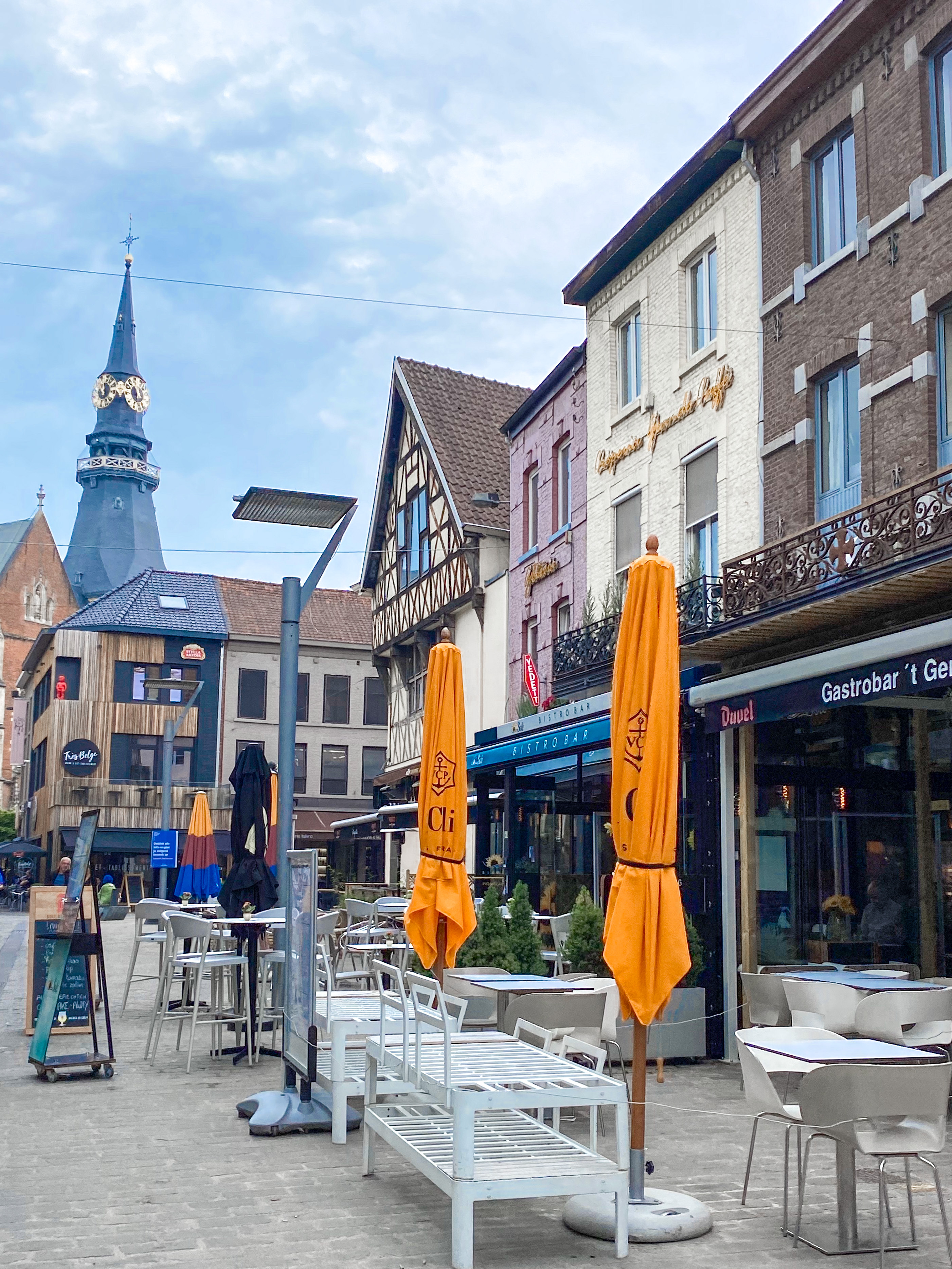 Lunch at The Century

Hasselt is a 2,5 hour train ride away from where I live, so I usually arrive little before noon. Just in time for lunch… Coincidence you say?! Maybe, but probably not. The Century is my uncle’s favorite restaurant in Hasselt, so whenever we plan a trip to the city, we always have lunch there. On the menu you can find a little bit of everything, going from salads, pasta and burgers to typical Flemish dishes like Moules-Frites and Belgian Stew. So far all the dishes I tasted were super yummy, so believe me there is definitely something to everyone’s liking here on the menu.

After lunch it’s time to explore Hasselt! The most fun way to get to know the city is simply by wandering around. The first thing you’ll notice about the city center of Hasselt is how walkable the streets are. In terms of historic landmarks, Hasselt doesn’t have that many, but that doesn’t mean that you won’t have a fun trip.
It goes without saying that you have to pass by the Grote Markt, the city’s main square. Order a nice cold beer (or wine, but this in Belgium so…) at one of the terraces and enjoy the people watching. Besides some cozy cafes and brasseries, you will also find one of the oldest houses in the city at the square. ‘Het Sweert’ is a half-timbered house in Maasland style. The house was named after a signboard, which shows a sword in a gloved fist, the symbol of the pharmacists. 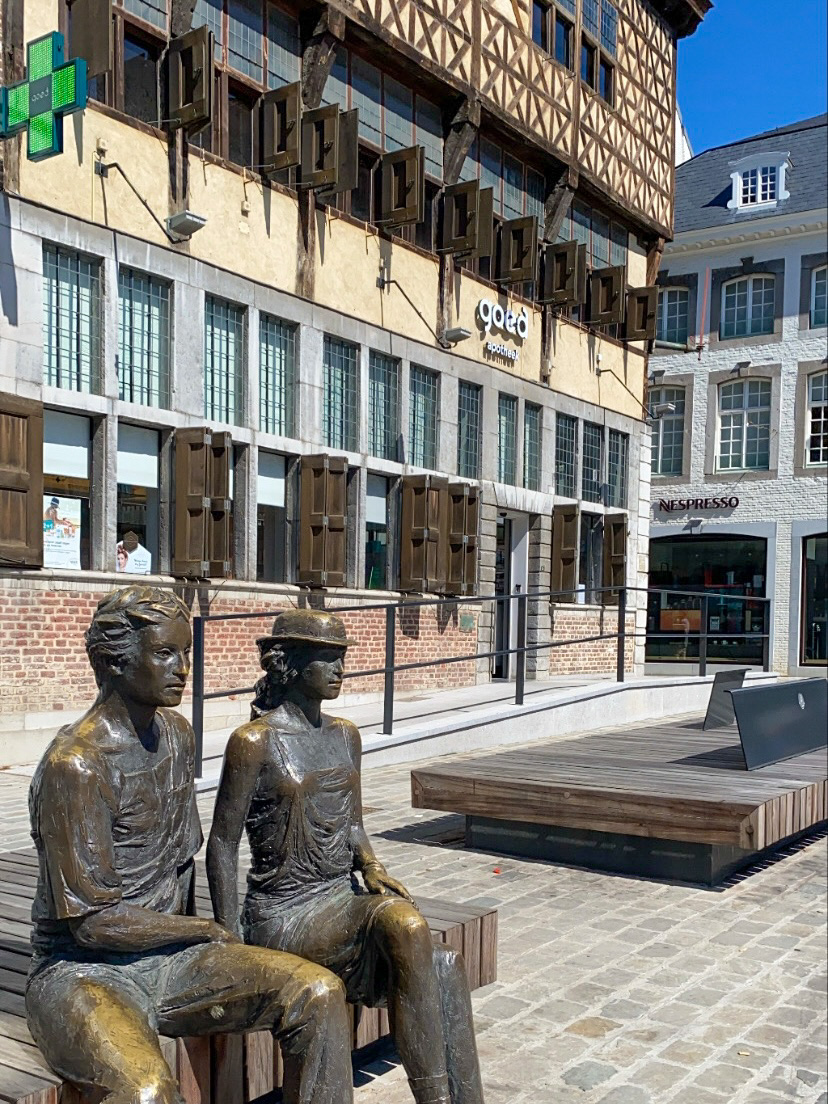 From there it’s a short walk towards the Vismarkt, where the Sint-Quintinus Cathedral is located. Inside the church tower you can now find the Carillon Museum. There also plenty of cool cafes located at the Vismarkt. 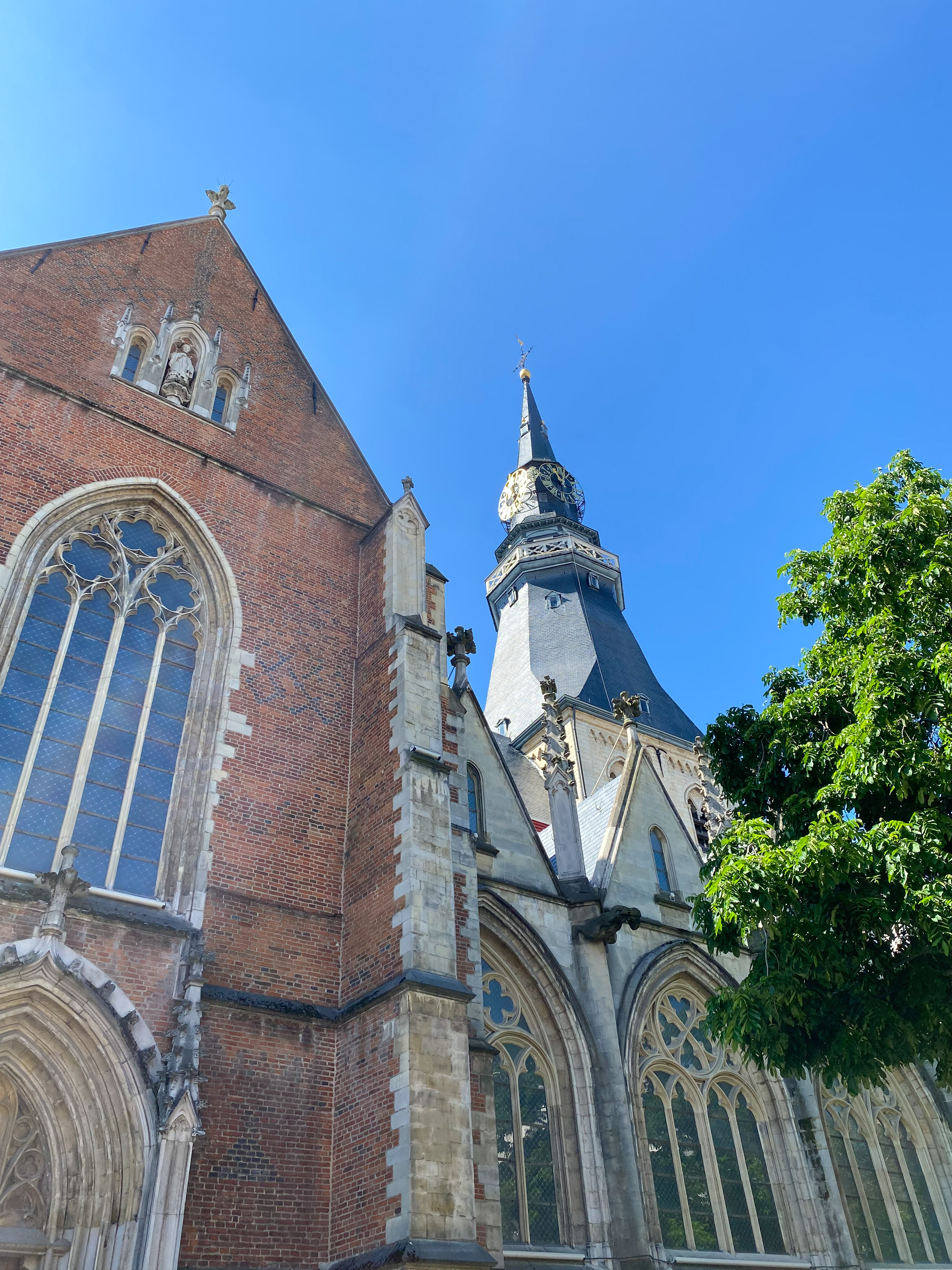 The Historic City hall at the Groenplein is in my opinion one of the most beautiful buildings in the city. Until 2018 is was used by the city itself as town hall, but nowadays Studio Stad is located there. Creative inhabitants can use the historic town hall to exhibit, perform and hold meetings. In addition, the Culture department also invites creative people every season to program their own performances, shows and activities. Pretty cool right that the building got a whole new life?

Make sure to keep an eye out for some impressive street art while you are walking the streets of Hasselt. I came across some very impressive murals. 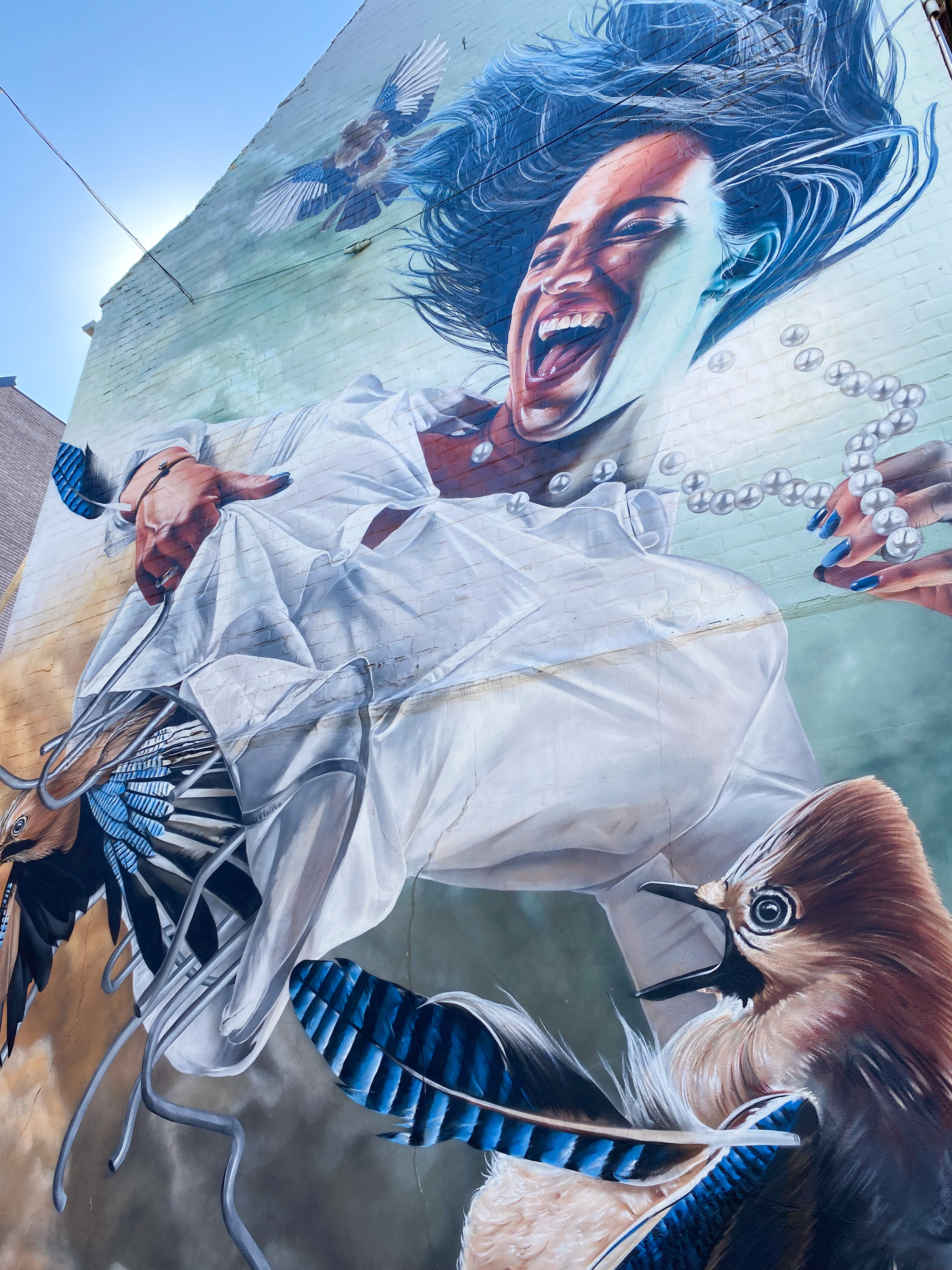 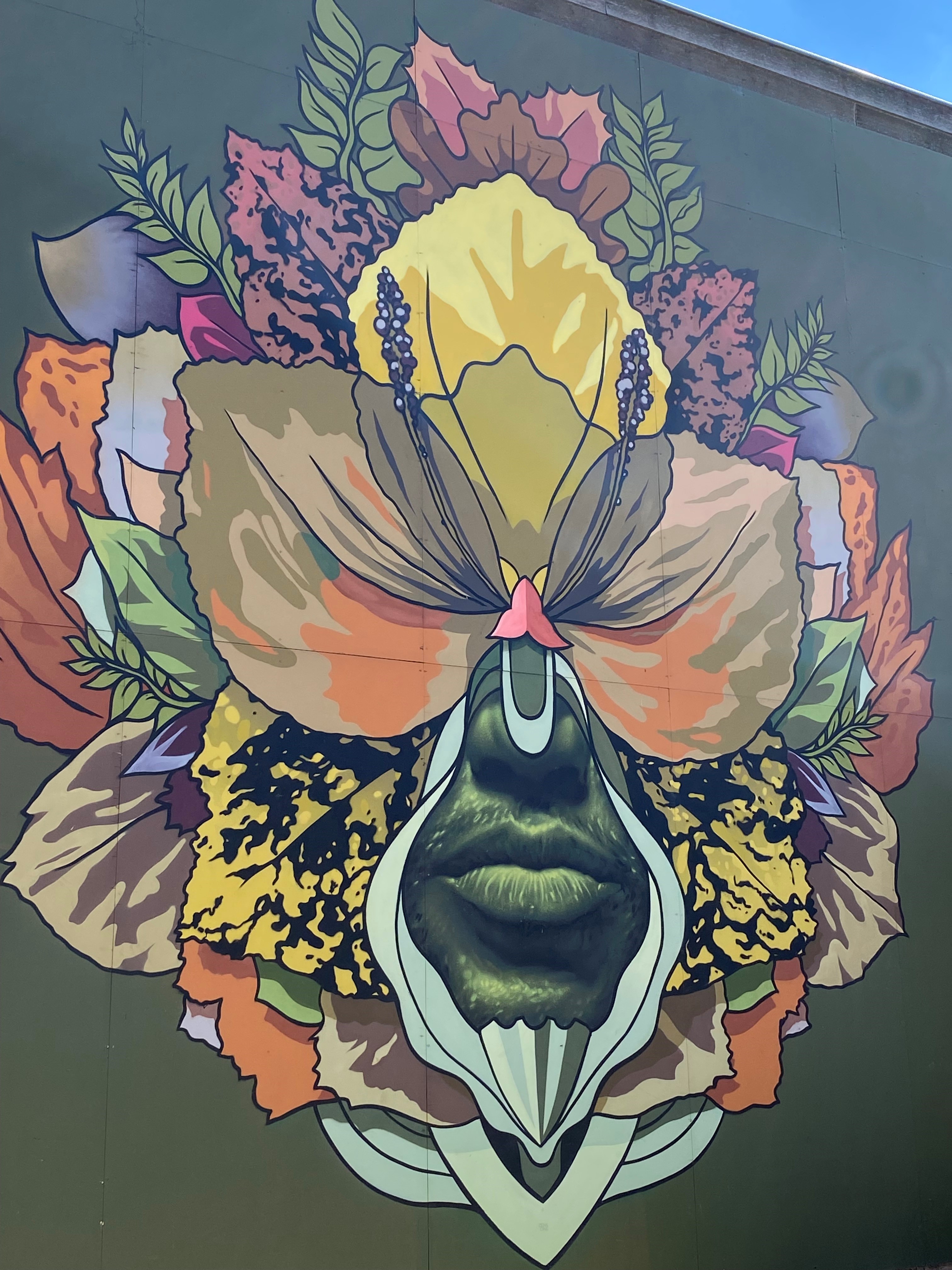 Hasselt has a lot of fun coffee spots. Usually I enjoy my cup of black gold at Sweet Coffee or KingKongCoffee, but as there was a new kid in town I wanted to check that one out instead. Cantine Clementine is located in the Maastrichterstraat. This lovely, pink hotspot serves the most cute and delicious cakes and cupcakes. Such a treat! 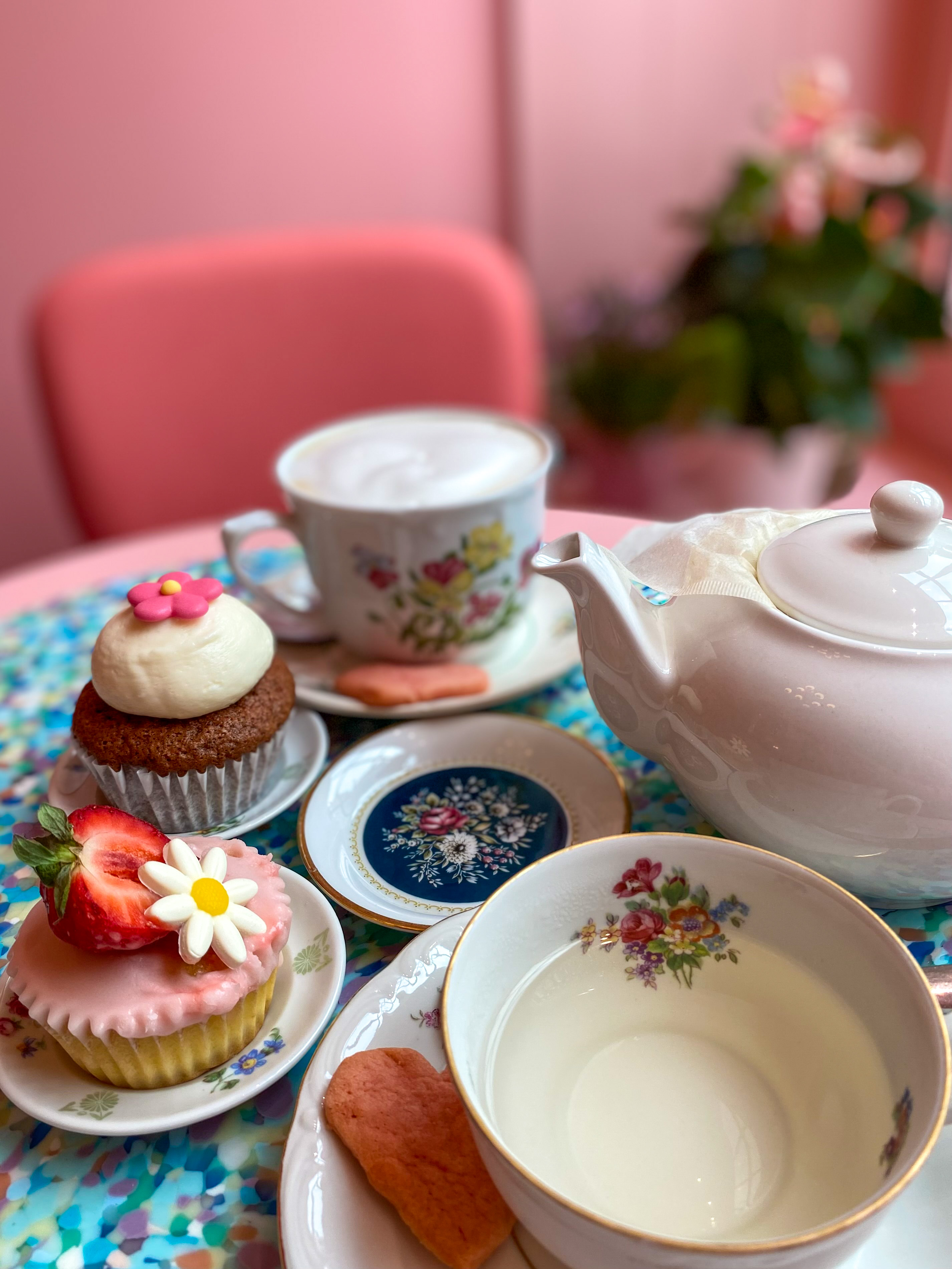 Hasselt is world famous for its delicious jenever. Hence the best, and for sure the most fun activity is a visit to the Jenever Museum. Seriously you guys, you haven’t been to Hasselt, if you don’t go there. You’ll thank me later! At the museum you will learn a lot about how jenever originated, the distillery process, which ingredients are used, how it was marketed, etc. After the visit, which takes about an hour, you can taste a jenever (or two, three) in the café of the museum. With a standard ticket, one drink is included in the price (€7). Cheers mates! 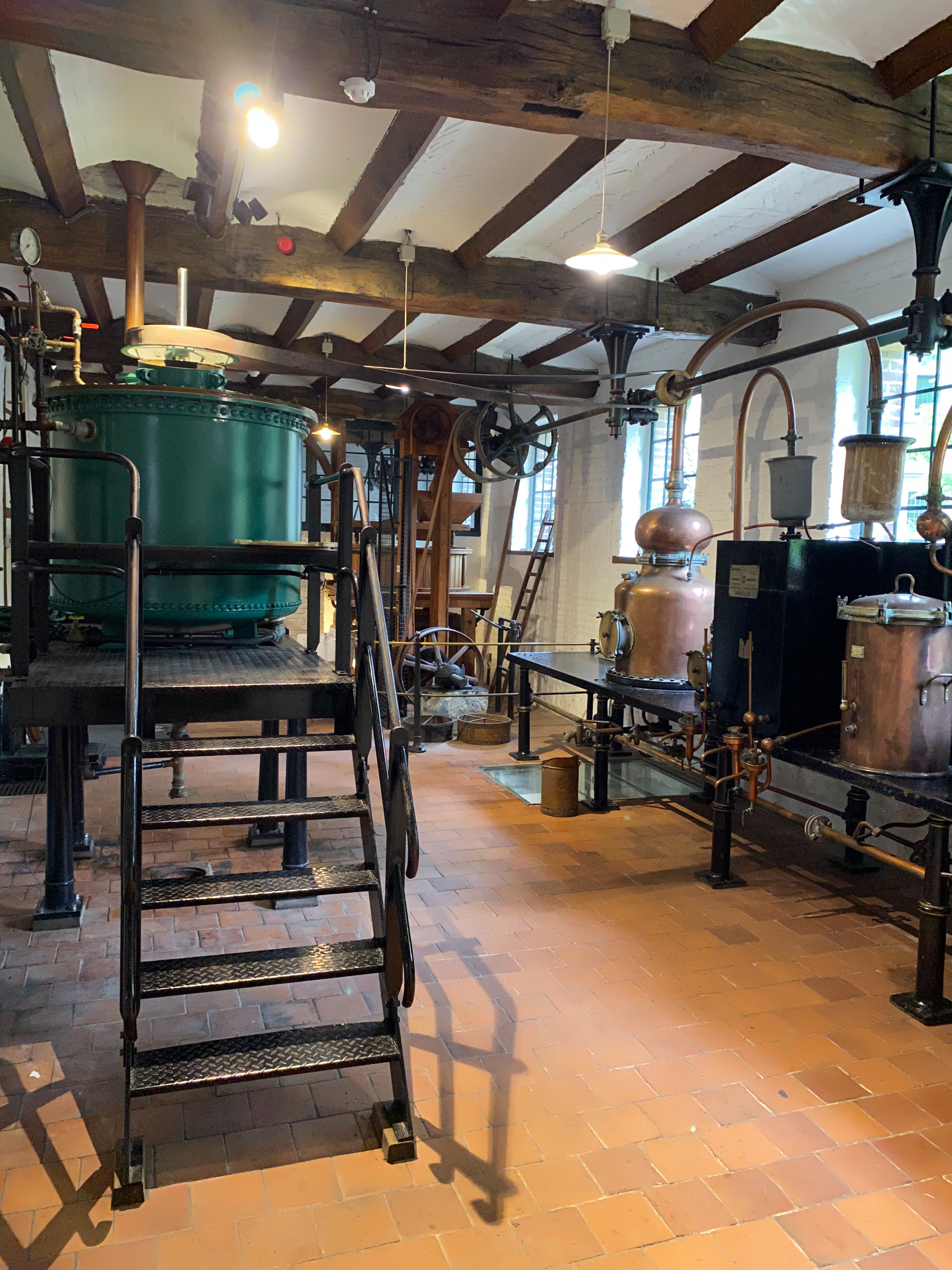 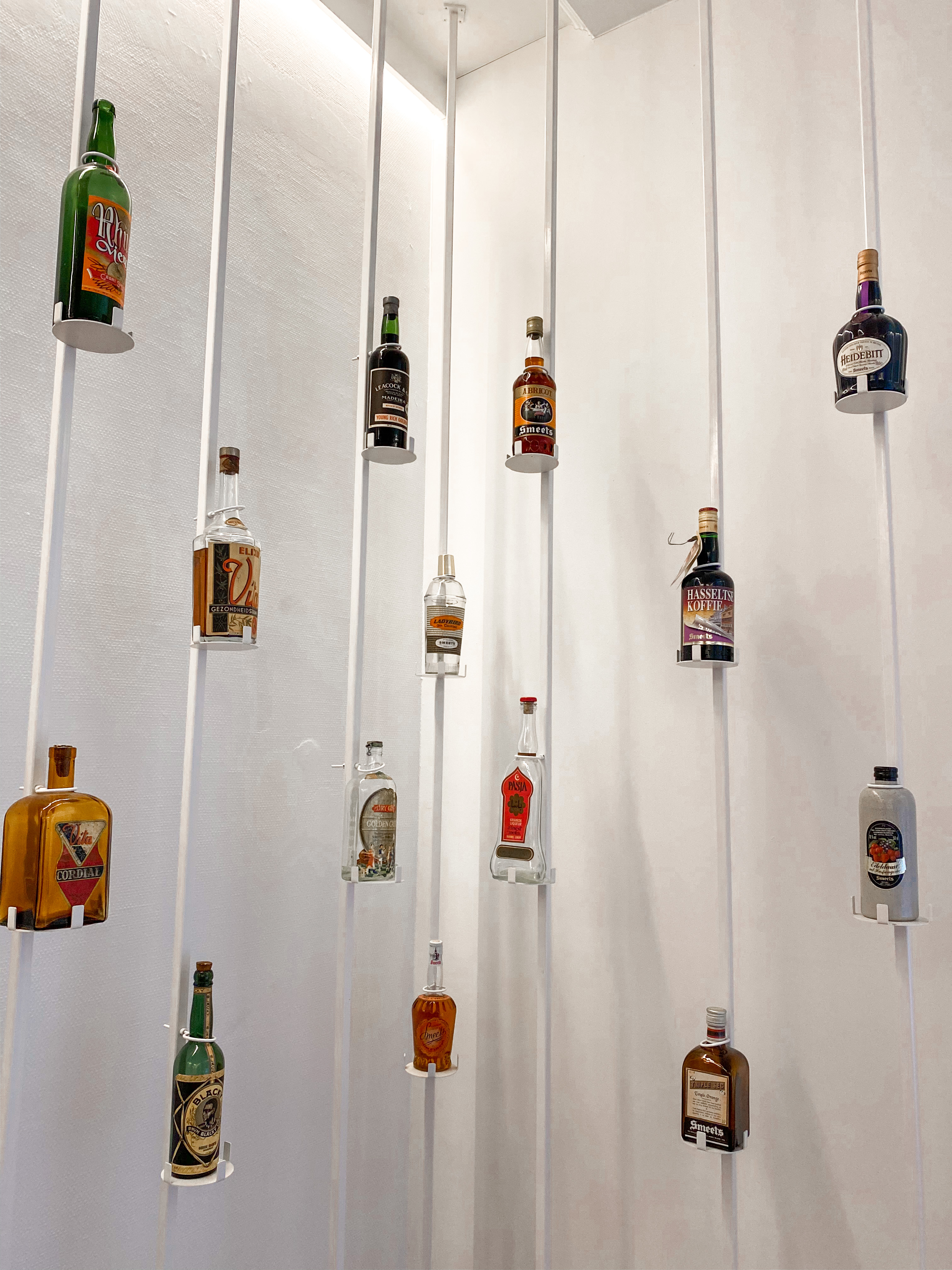 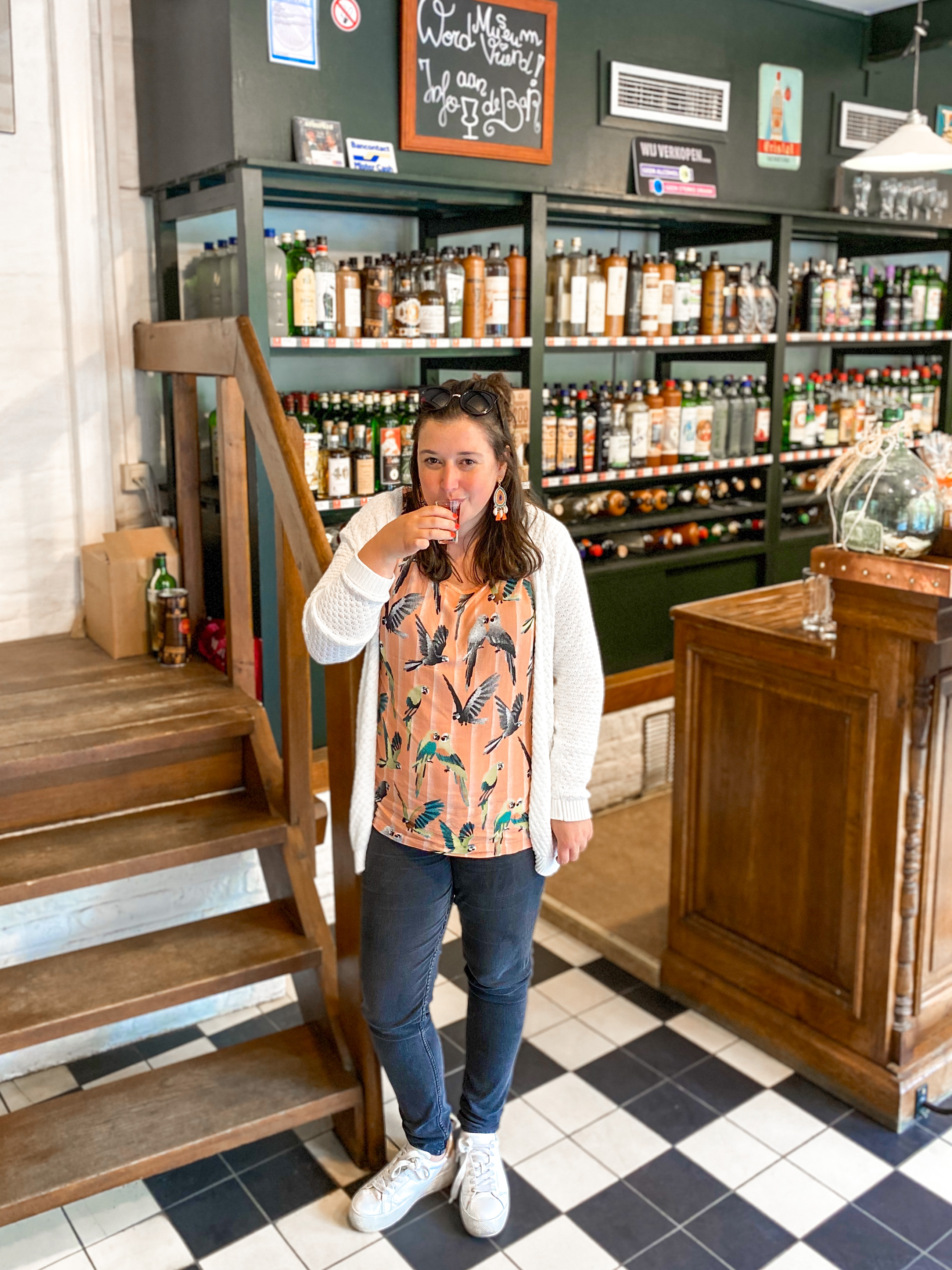 During my Hasselt trip I stayed at YUP Hotel Hasselt, a fun boutique hotel with a vibrant ‘80s concept. If you like to know more about my stay there, make sure to click here. 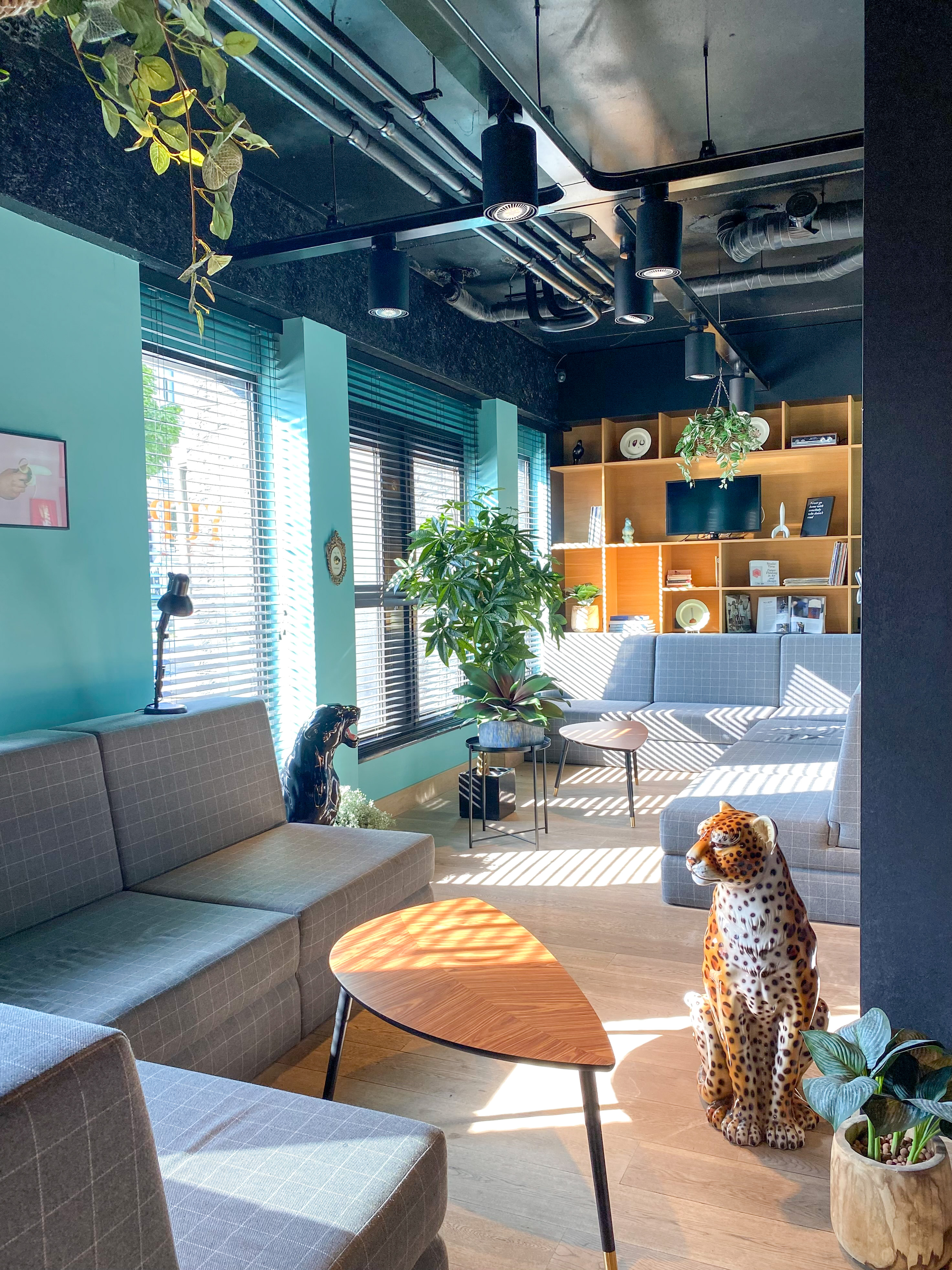 For dinner we decided to go to Quartier Blue, the new and hip city quarter located at the marina. We had made a reservation at BLEND by Rauw. I had heard great things about the food, but the waiters were so rude and arrogant to us, that we decided to leave. We ended up going to Maison Mathis. And honestly you guys, I’m so glad we did, because everyone there was so kind and hospitable. Overall, there was such a nice vibe at the restaurant. We got a table at the waterside, so we were able to enjoy the view upon the marina, which is always a nice extra. The menu is quite elaborate; salads, pizza, pasta, burgers, Belgian classics, several meat and fish dishes and even some veggie and vegan options. I had the ‘Pizza San Daniele’ with Burrata, Rucola, Parmesan cheese and San Daniele ham. This was hands down the best pizza I had in a while! Also the cocktail and wine lists were pretty great. I can’t wait to go back here, next time when I’m in town. 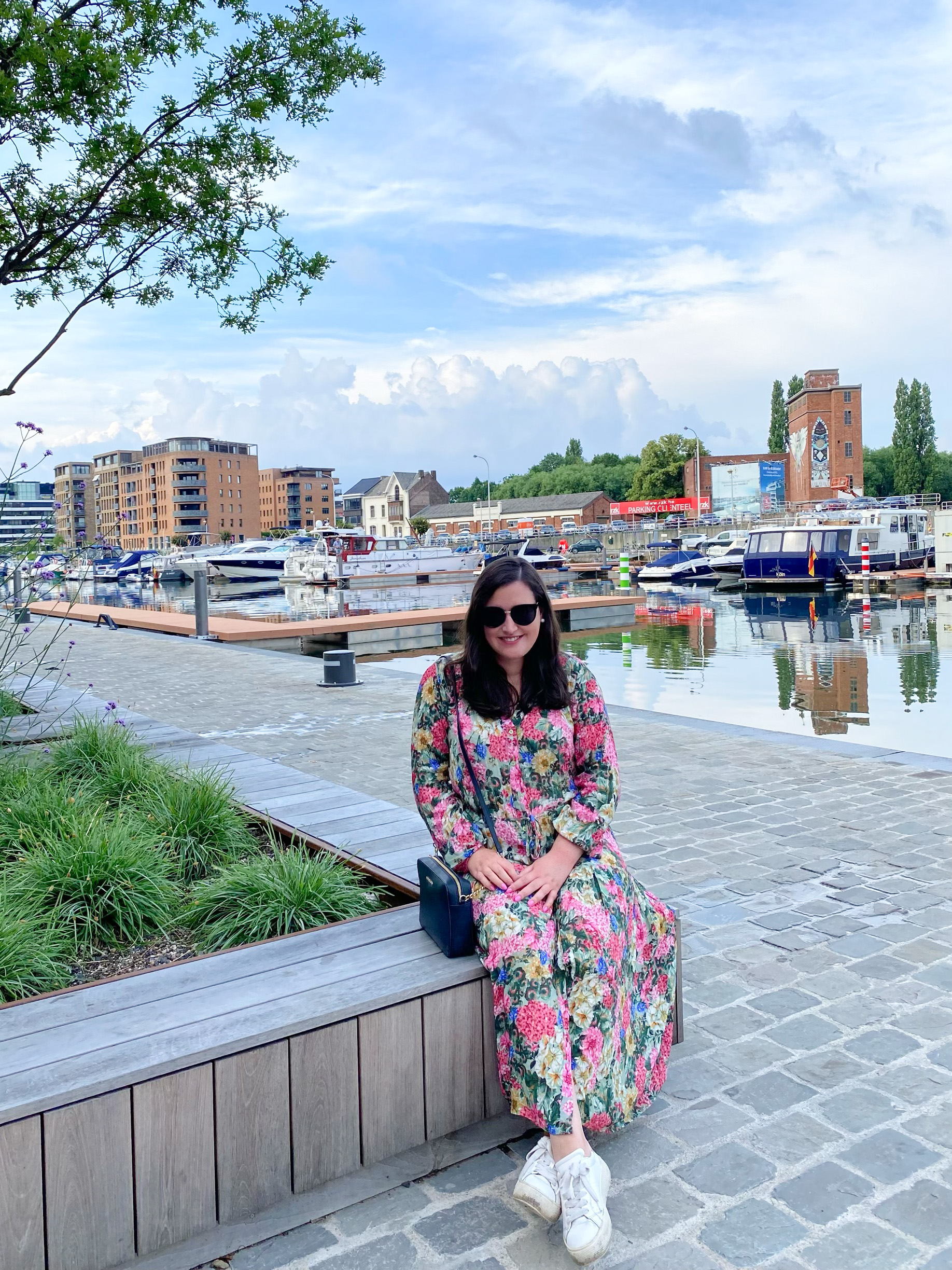 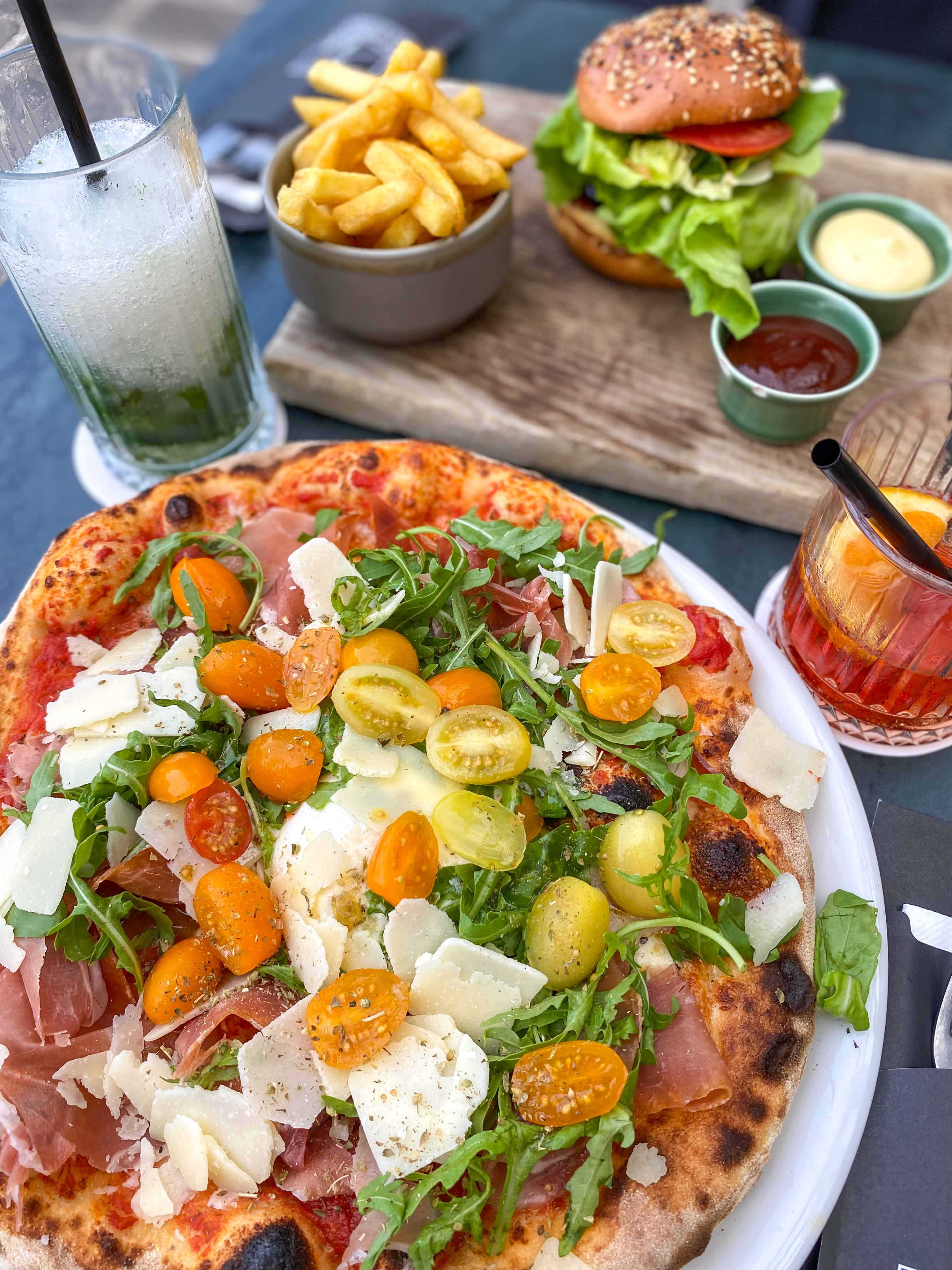 Shop till you drop

After a good night’s sleep and yummy breakfast at YUP Hotel Hasselt, I wanted to do some shopping. Hasselt is one of the most fun shopping and fashion cities in Belgium. From small streets with exclusive and alternative boutiques to large shopping streets with the typical chains. In Hasselt you will find it all within walking distance of each other. The main shopping streets are Demerstraat and Koning Alberstraat, while the smaller Hoogstraat and Kapelstraat are where things get a little more upscale. The cool flagship and concept stores are located at Quartier Blue.

Fashion lovers need to check out the Hasselt Fashion Museum, the only museum in the Low Countries and the Euregion that is dedicated exclusively to fashion and clothing. I haven’t been there myself, but I keep hearing great things about it, so this is something I should keep in mind for a future visit.

All that shopping got me hungry, so I went to Marloo’s for lunch. Marloo’s is a hip foodbar in the Minderbroederstraat. Because of its central location near the main shopping streets, things can get busy, but luckily you don’t really feel that as a costumer, as service is quick and the staff super friendly. The interior of the foodbar is modern and cozy. On the menu you will find a lot of classics, but with a Marloo’s twist, such as the ‘Club Sandwich Romain’ which was really tasty.

I think Hasselt is charming the whole year around, but some seasons or events add some extra sparkle to the city:

Like the Cherry Blossom Festival at the Japanese Garden for instance. I have never been, but I really want to. The Japanese garden in Hasselt is the largest of its kind in Europe and the perfect setting to fully experience the Japanese culture. The garden itself is open every year from 1th of April until 31th of October, but the Cherry Blossom Festival is only taken place during the month of April. If you like to go, I would suggest to check out the Facebook page to know when the flowers are in full bloom. And maybe I’ll see you there next year?! 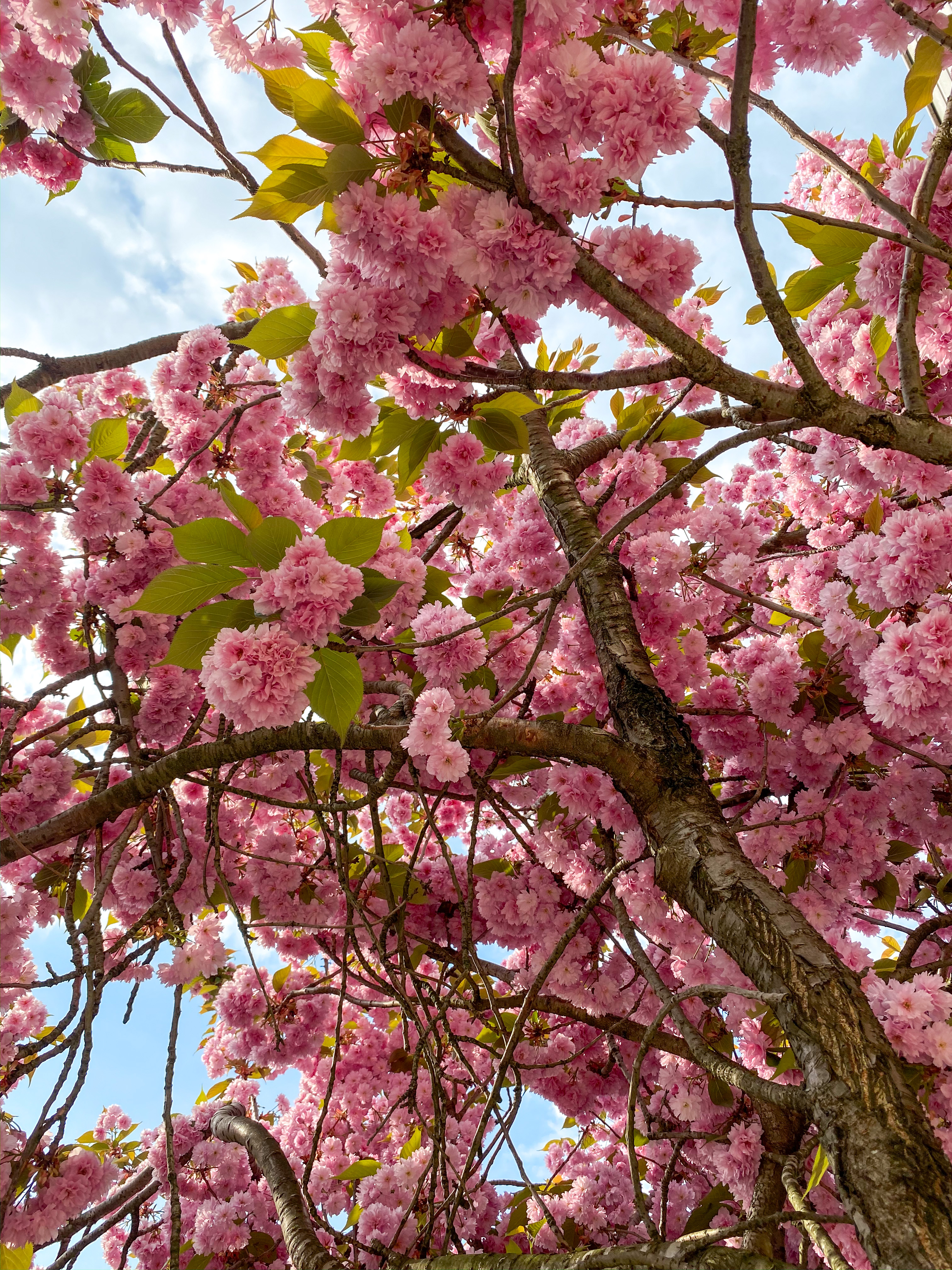 Stop and smell the Lavender at Limburg Lavendel Farm! Lavender Fields in Belgium you say? Yes, I was able to found a little piece of the Provence in Hasselt. Well Stokrooie to be exact, about 8 km’s from the city center by car. Don’t expect acres of lavender fields, but it was really lovely to see. There’s also a nice cafe to enjoy a drink in the sun. I got instant holiday feels during my visit to Limburg Lavendel last month. 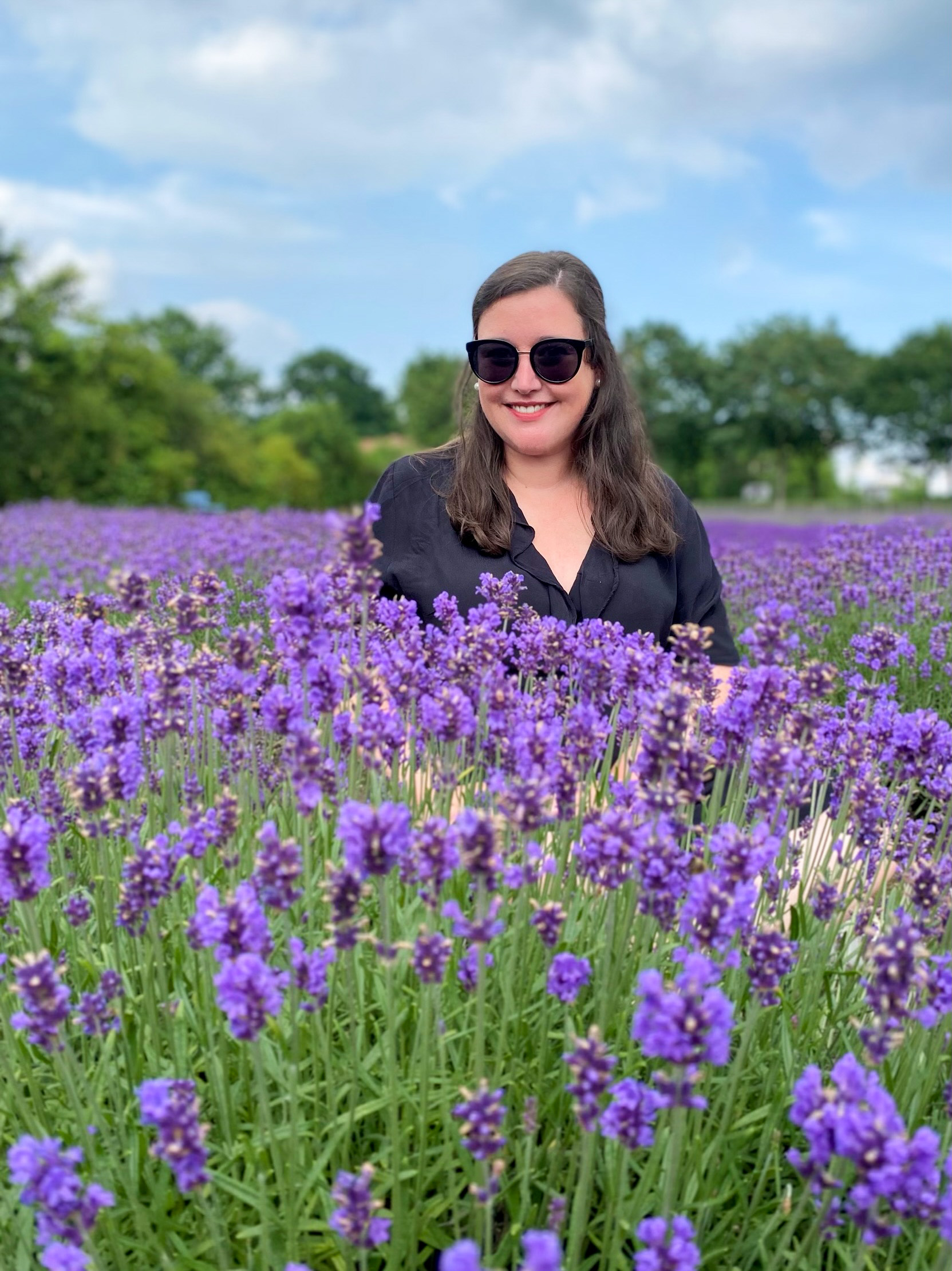 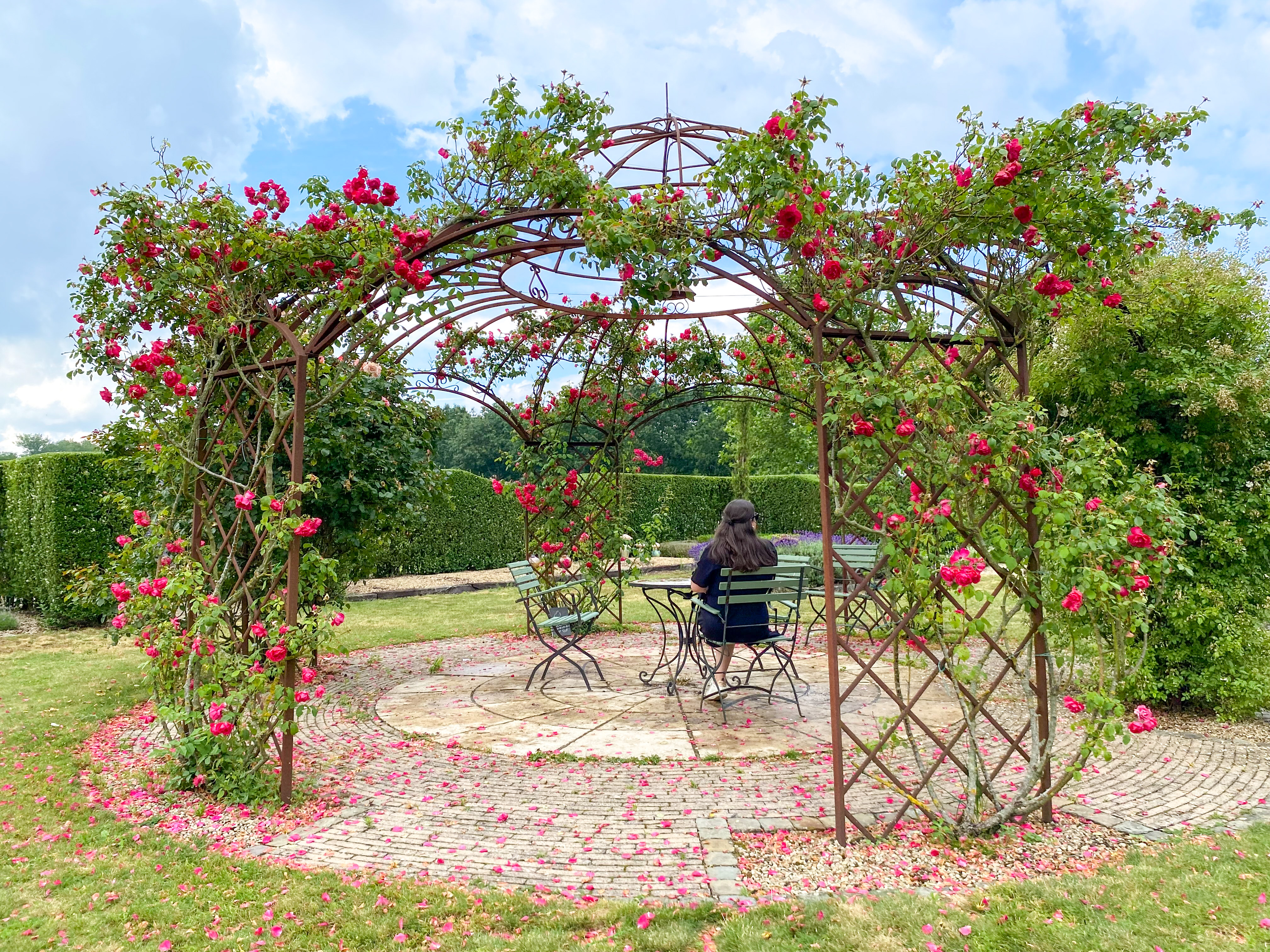 Finally I want to tell you all about the Christmas magic that is Winterland Hasselt at the Kolonel Dusartplein. Just like in many other Belgian cities, you can find a Christmas market in Hasselt. Yet Hasselt’s is more than an ordinary Christmas market. Winterland looks more like an elaborate winter fair than a traditional Christmas market. In addition to the various shops, there are numerous carnival attractions like a rollercoaster, a haunted house, arcades and a carrousel. Near the Grand Café, the epicenter of Winterland, you can also found Santa’s House and an ice skating rink. My sister Laura and I went to Winterland a couple of years ago and absolutely had the best time. The only negative thing I can say about Winterland is the food. There are several food stalls (fries, burgers, bratwurst and so much more). We tried a few, but we didn’t think the food was up to standard. So, I would recommend to make a reservation in one of the amazing restaurants in the city and save yourself the disappointment (and money).