On our final day we wanted to explore Valencia’s seafaring districts some more. The five neighborhoods that make up the Poblats Marítims (Malvarrosa, Beteró, Cabanyal-Canyamelar, El Grau and Nazaret) have evolved over time from small fishermen’s villages into popular tourist resorts. We didn’t have the time to visit all five of them, so we decided upon visiting El Cabanyal-Canyamelar, as that was one of the less touristy and more authentic parts of the area. We wanted to add some Vitamin Sea to our day too and spend a relaxing afternoon at Patacona Beach. Finally there was also a little part of the old town that we had to cover, so we did that before dinner.

Yes, it’s also on my list: Dulce de Leche. You’ve probably already heard about this fun coffee spot, as I feel that every blogger that visited Valencia has written about it. The one in Ruzafa is the first and most popular one, but as there as so many cool spots in the hipster part of town I wasn’t planning on going there. While walking around the hotel I came across another Dulce de Leche location and we figured why not have breakfast there? 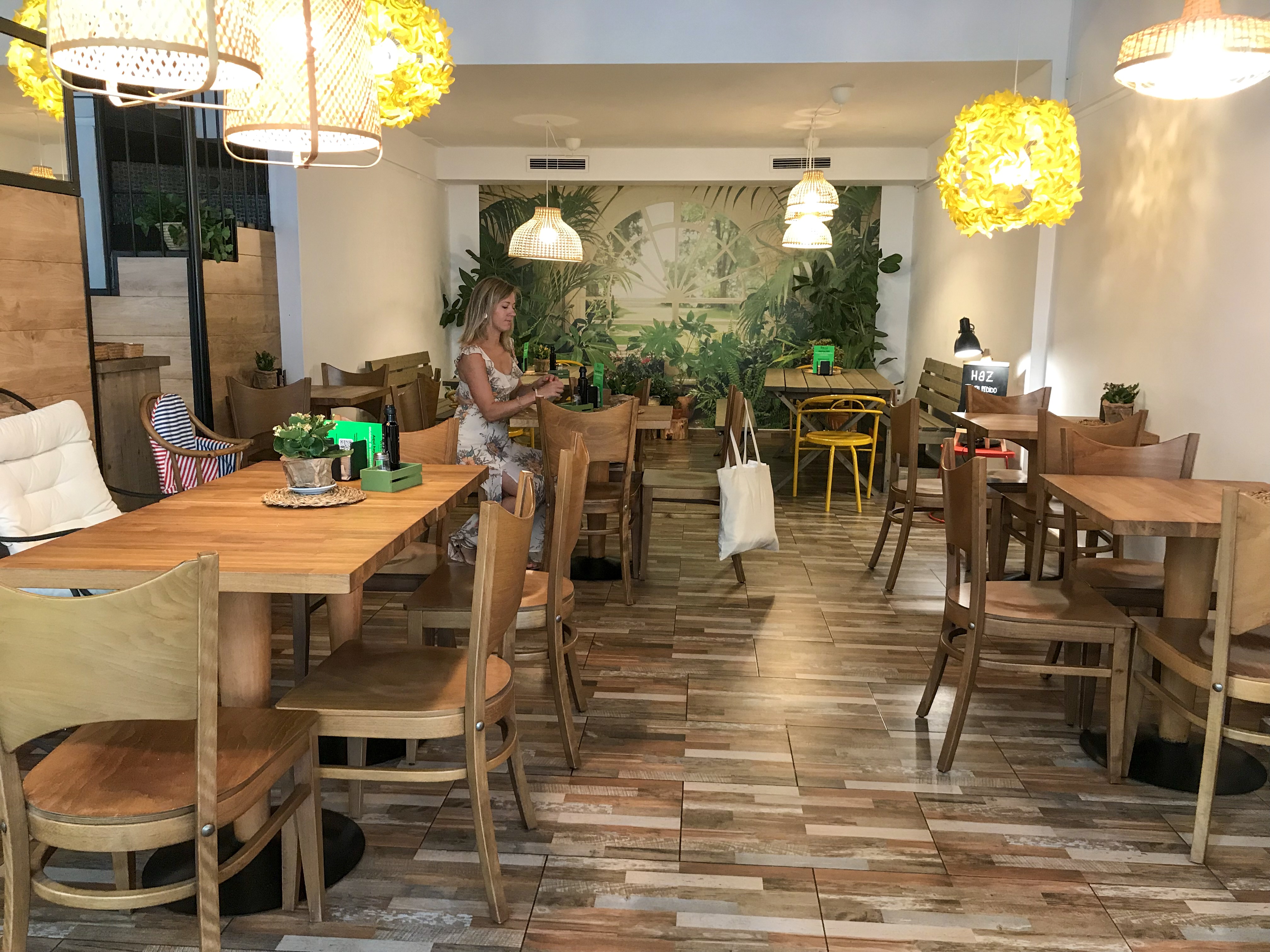 Dulce de Leche is a great spot for breakfast and lunch, but the thing that they are most famous for is their large selection of homemade cakes and pies! The displays are filled with them, and quite frankly looking at all the yummy desserts, made me wanna’ forget about breakfast all together and order pie! Luckily I was able to control myself, because breakfast was a threat as well! If you are there for lunch prepare yourself for some homemade quiche and fresh sandwiches. 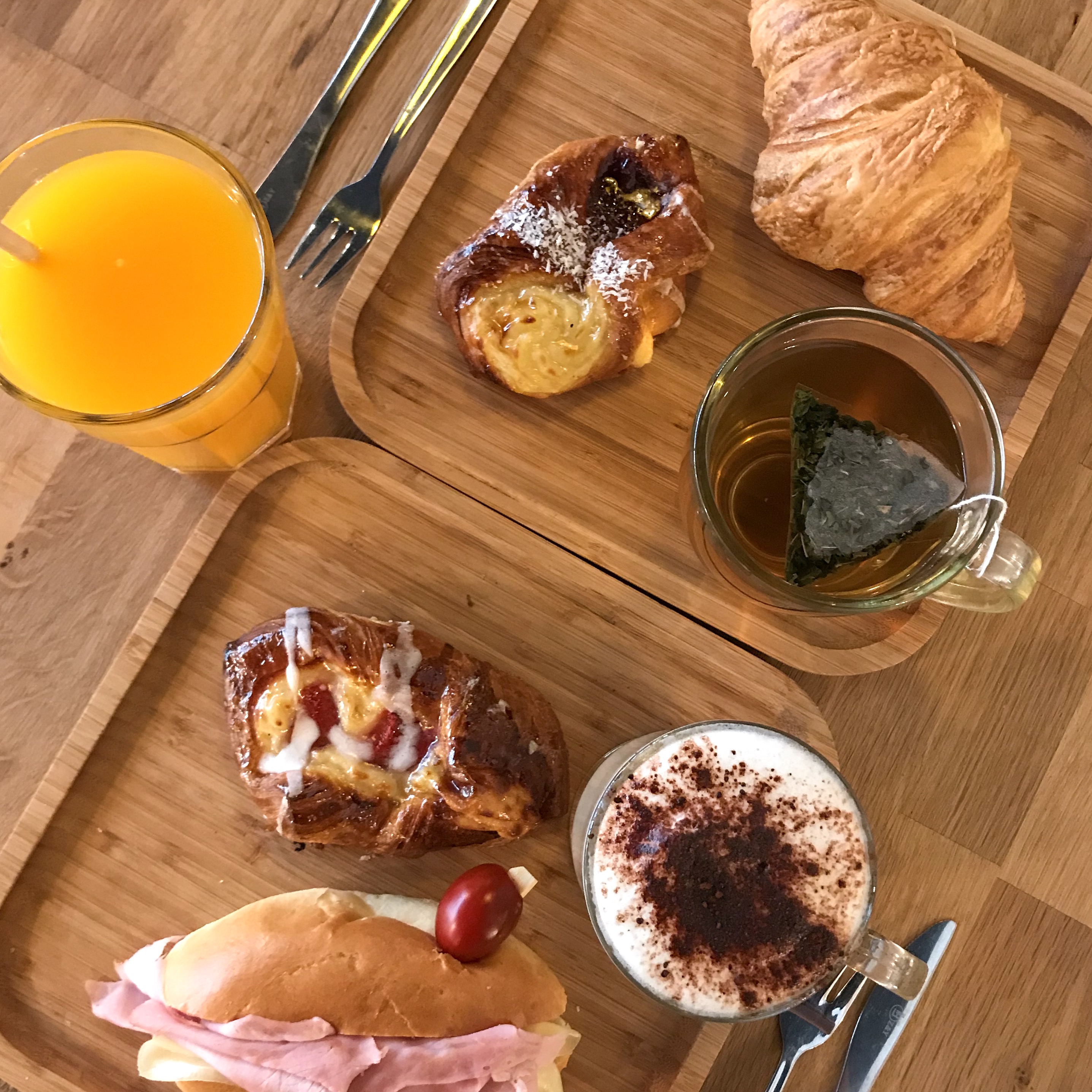 The ‘El Cabanyal’ neighborhood is one of the most charming parts of Valencia! This old fishermen’s quarter used to be a separate part of the city that had to be constantly rebuilt after multiple floods and fires. Since the end of the 19th century, El Cabanyal officially became a part of the city of Valencia. In the period between 1880 and 1940 beautiful Art Nouveau and Art Deco houses were built, from which we can still see a lot today. The colorful tiles, used to decorate the facades are what make the houses truly special! The best way to discover El Cabanyal is to get lost in its street and enjoy the colorful houses. We spotted very pretty ones in the Calle de la Reina, Calle Rosario, Carrer Barraca, Carrer Progres and Carrer Padre Luis Navorra, so you might wanna’ check these ones out! 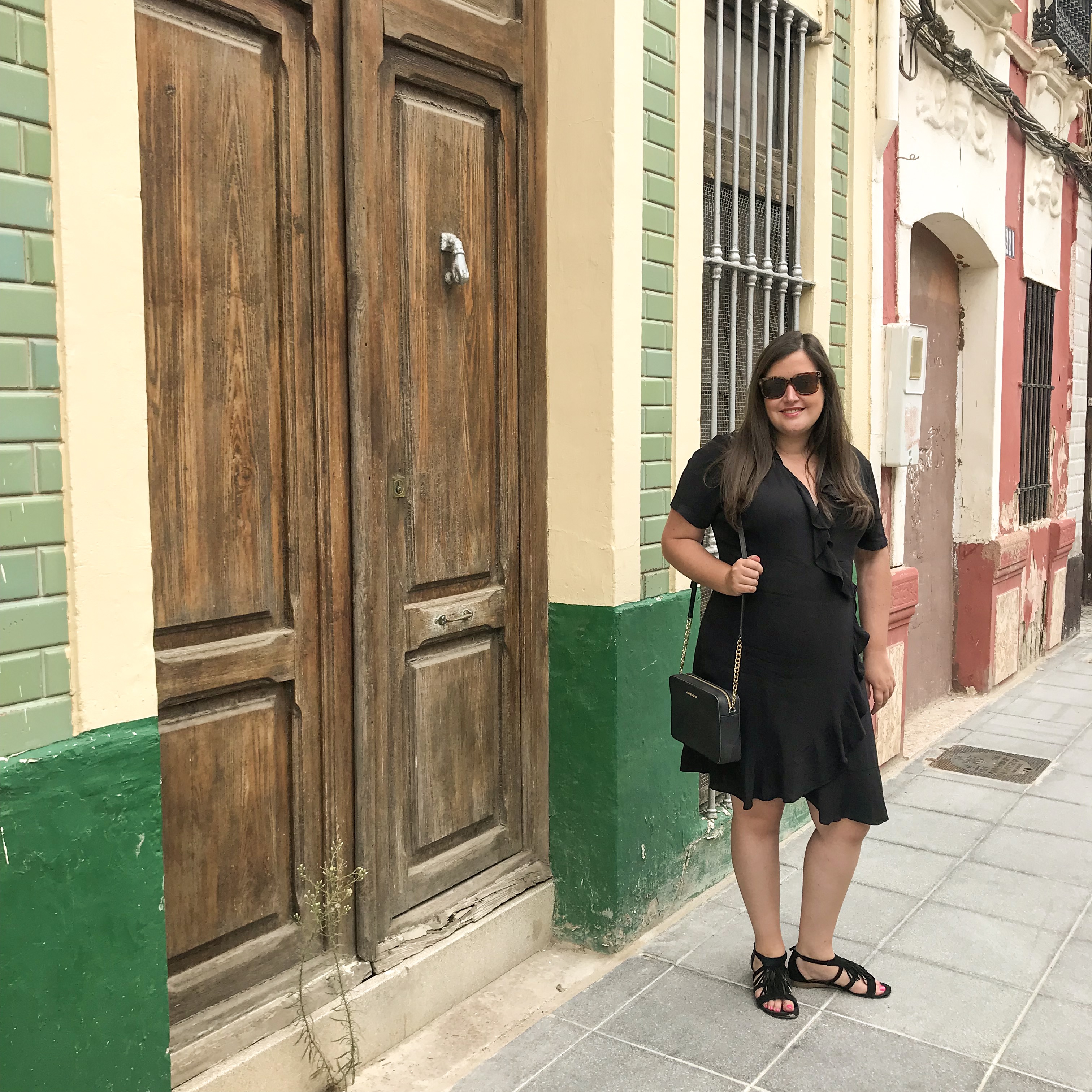 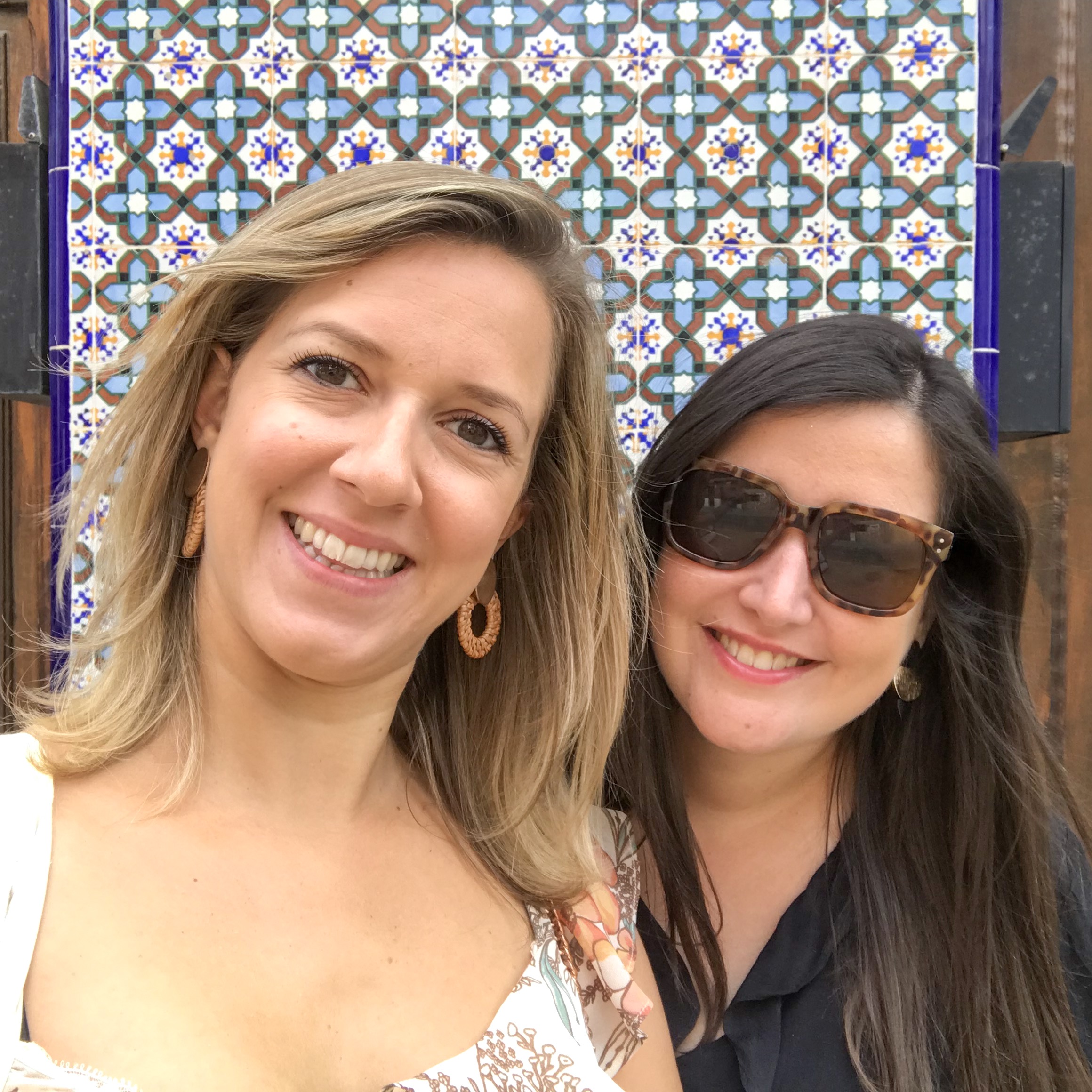 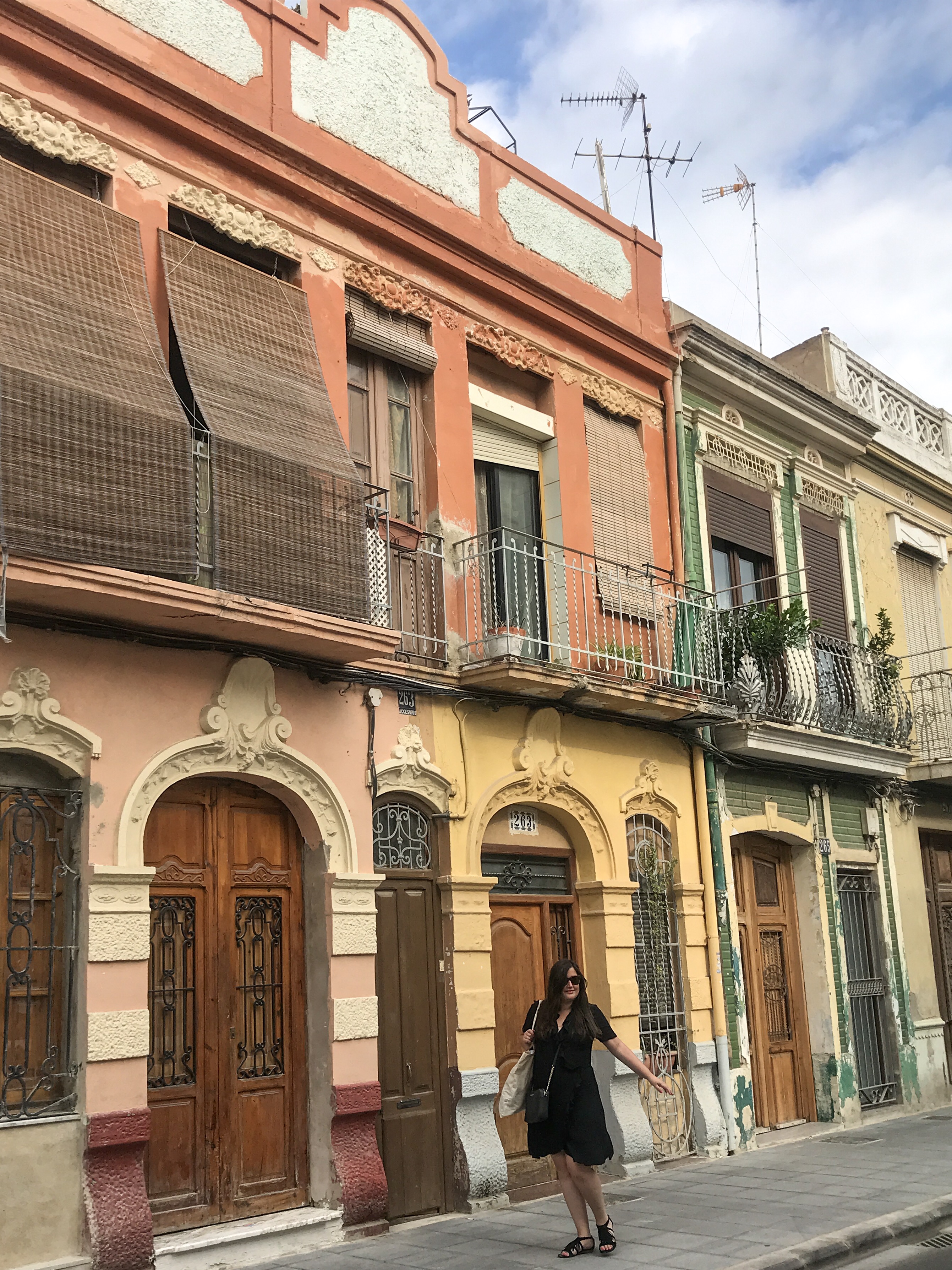 Unfortunately this hidden gem of a neighborhood may not exist for much longer. If city hall planners get their way, bulldozers will come and tore the area down in order to extend a modern avenue from the city center to the sea. It’s difficult to find any concrete information about it, but I’d definitely recommend visiting El Cabanyal and showing support to local businesses. 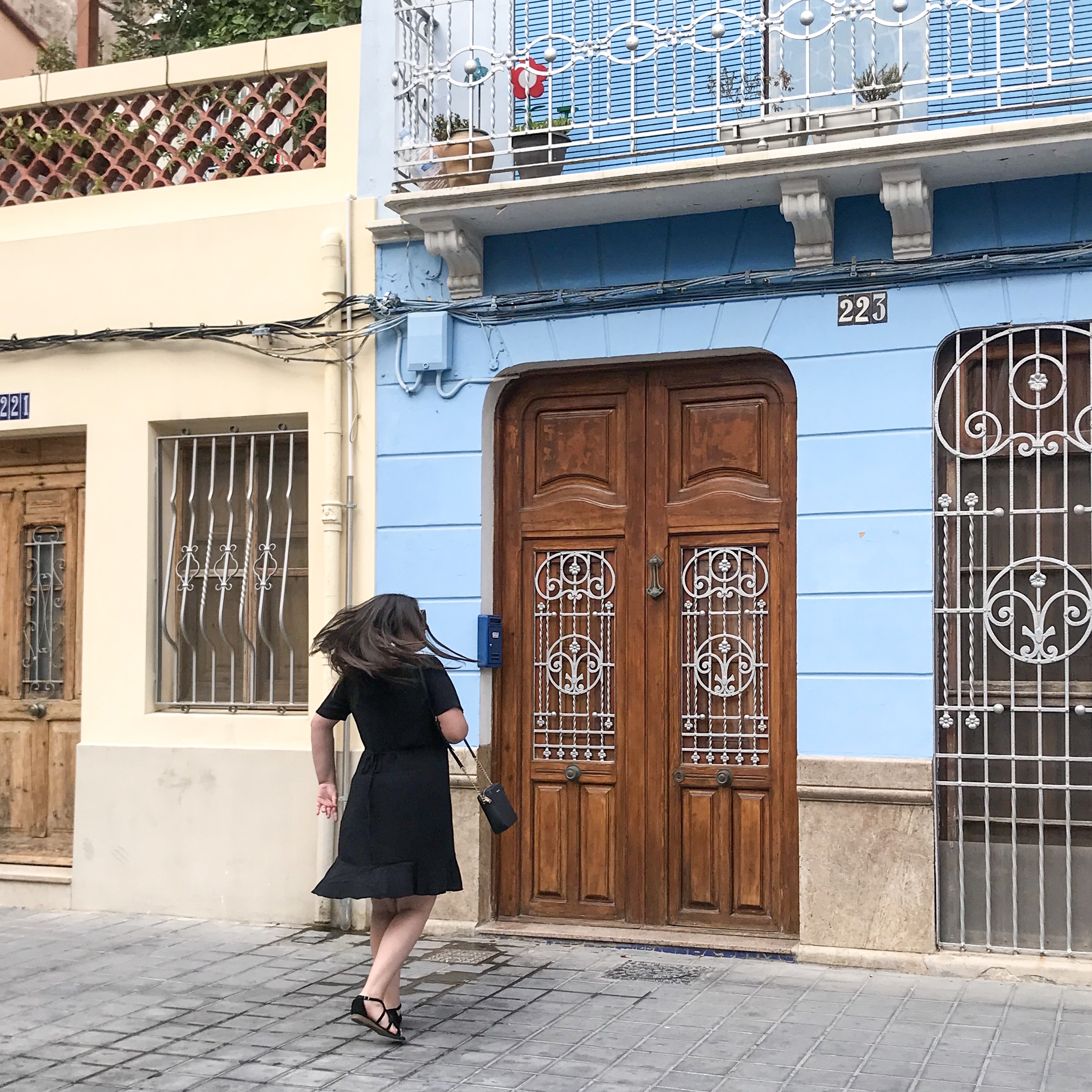 From El Cabanyal it’s a lovely walk along Las Arenas Beach to Patacona.

La Mas Bonita is my absolute favorite spot in Valencia! And with three restaurants in Valencia (Patacona, Ruzafa and Salvatierra) I am not the only one who feels that way. For the Patacona location you have to go all the way to the end of the boulevard, but it’s really worth it! Most restaurants along the boulevard looked traditional and very much a like, but La Mas Bonita really stands out thanks to its lovely colors and decor. It’s a charming venue for breakfast, lunch, tapas and delicious cocktails in the sun. La Mas Bonita Patacona is super popular and when we went there for an early lunch, both terraces were already full. Luckily we managed to get a table inside, because the food and fresh juices were too good to be true! I also really loved the easy-going atmosphere!
In front of the restaurant there is also a chiringuito (beach bar) on the sand itself. We rented a sun bed and umbrella their and enjoyed a quiet afternoon at the beach, while sipping on La Mas Bonita’s yummy juices. Such good times! 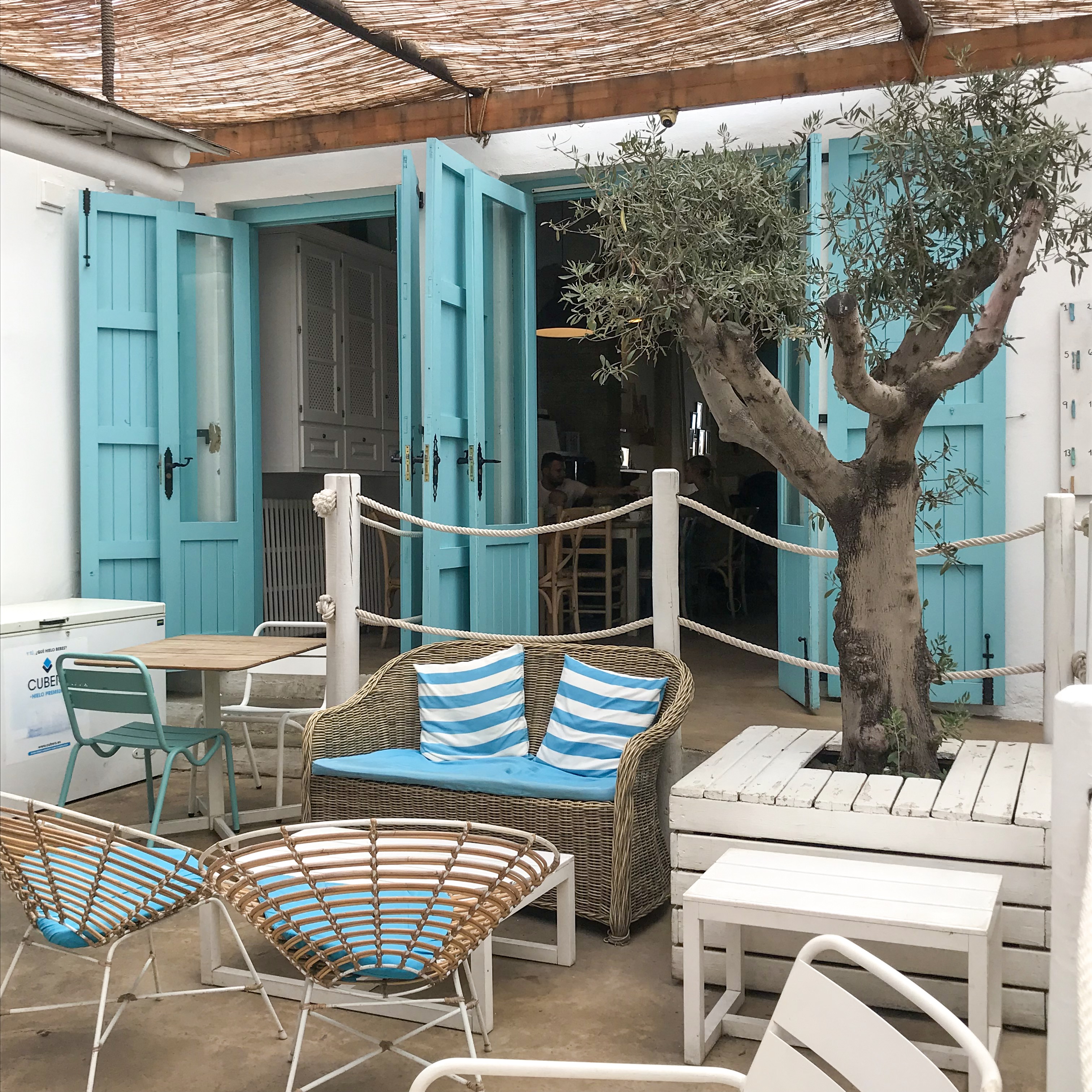 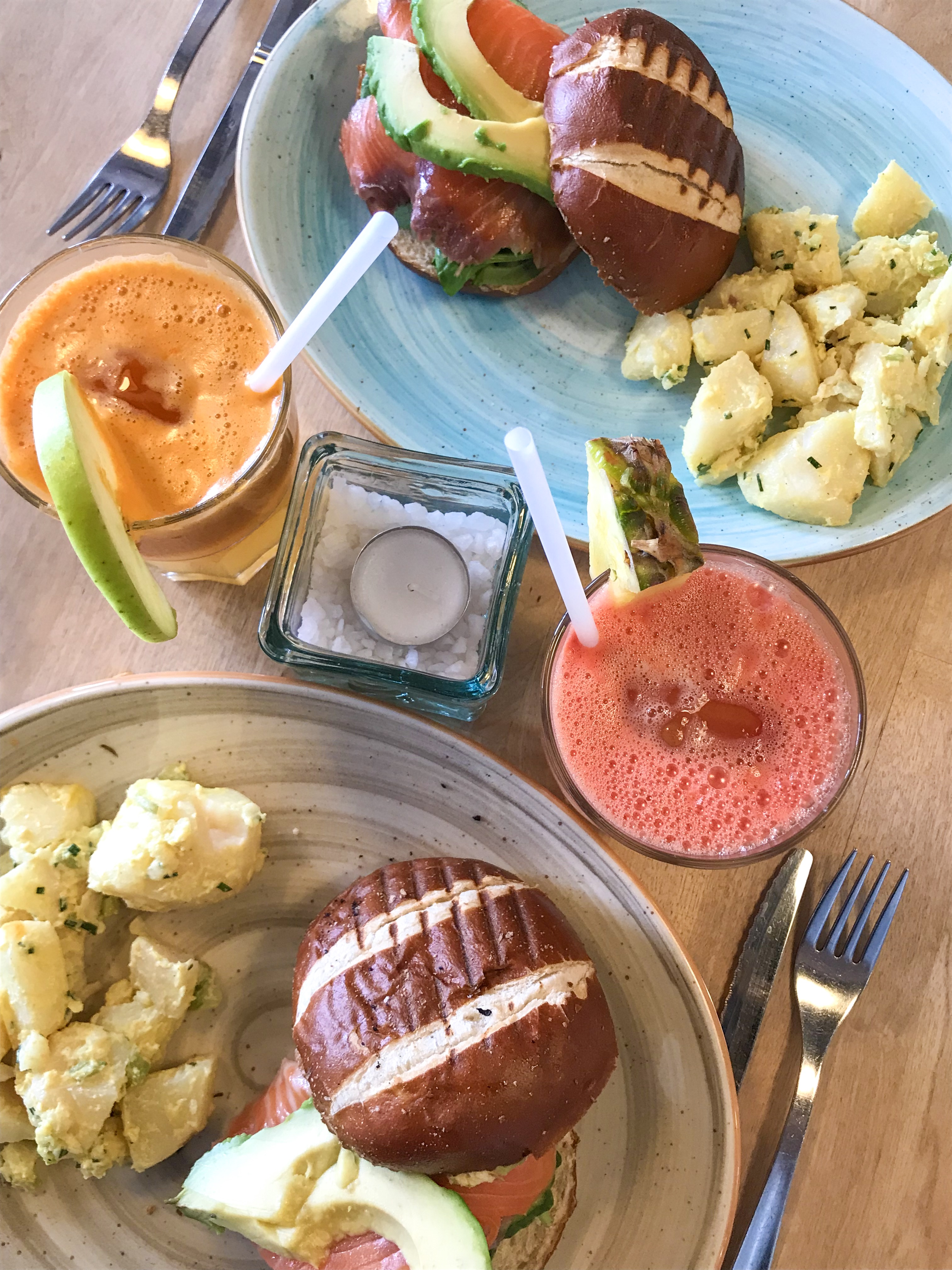 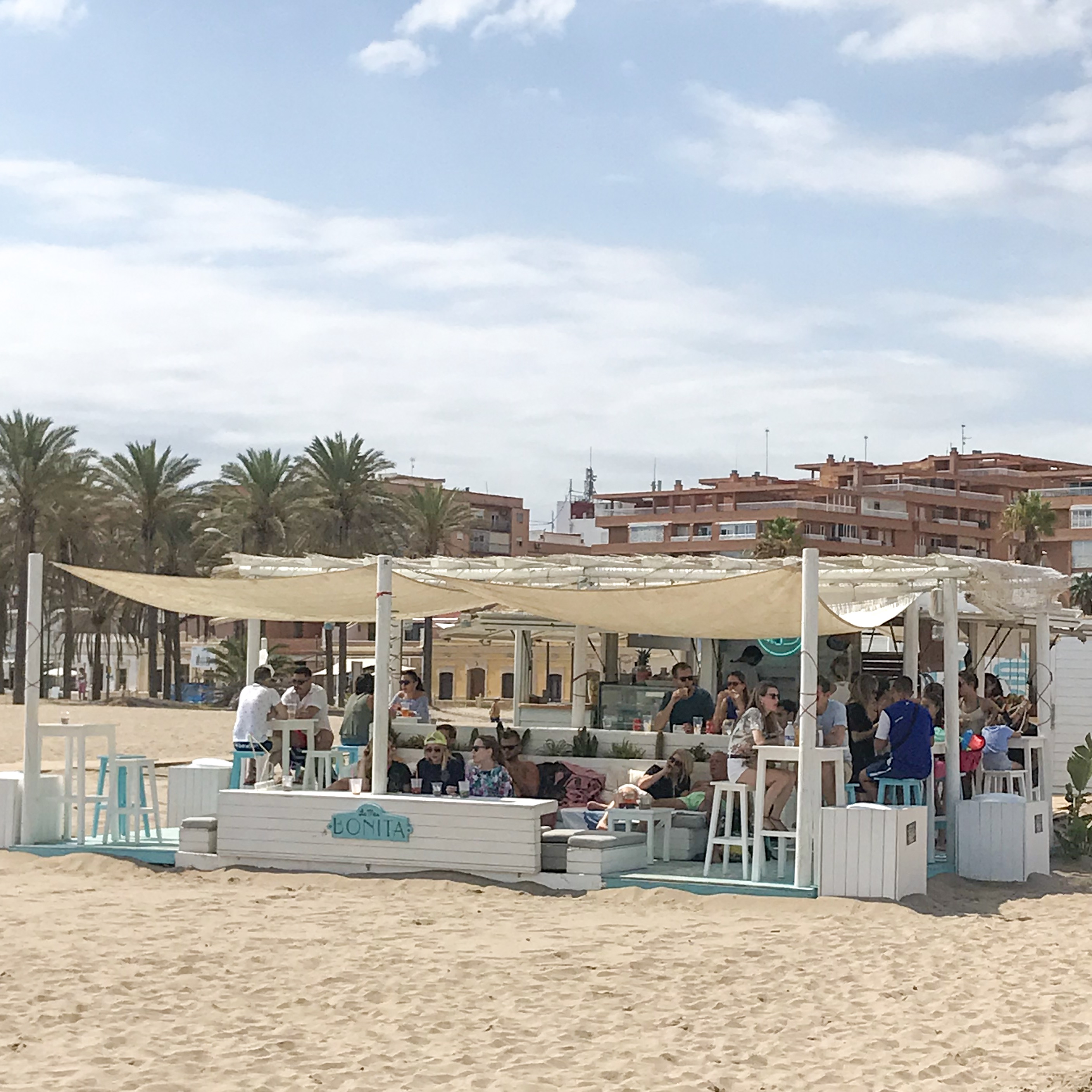 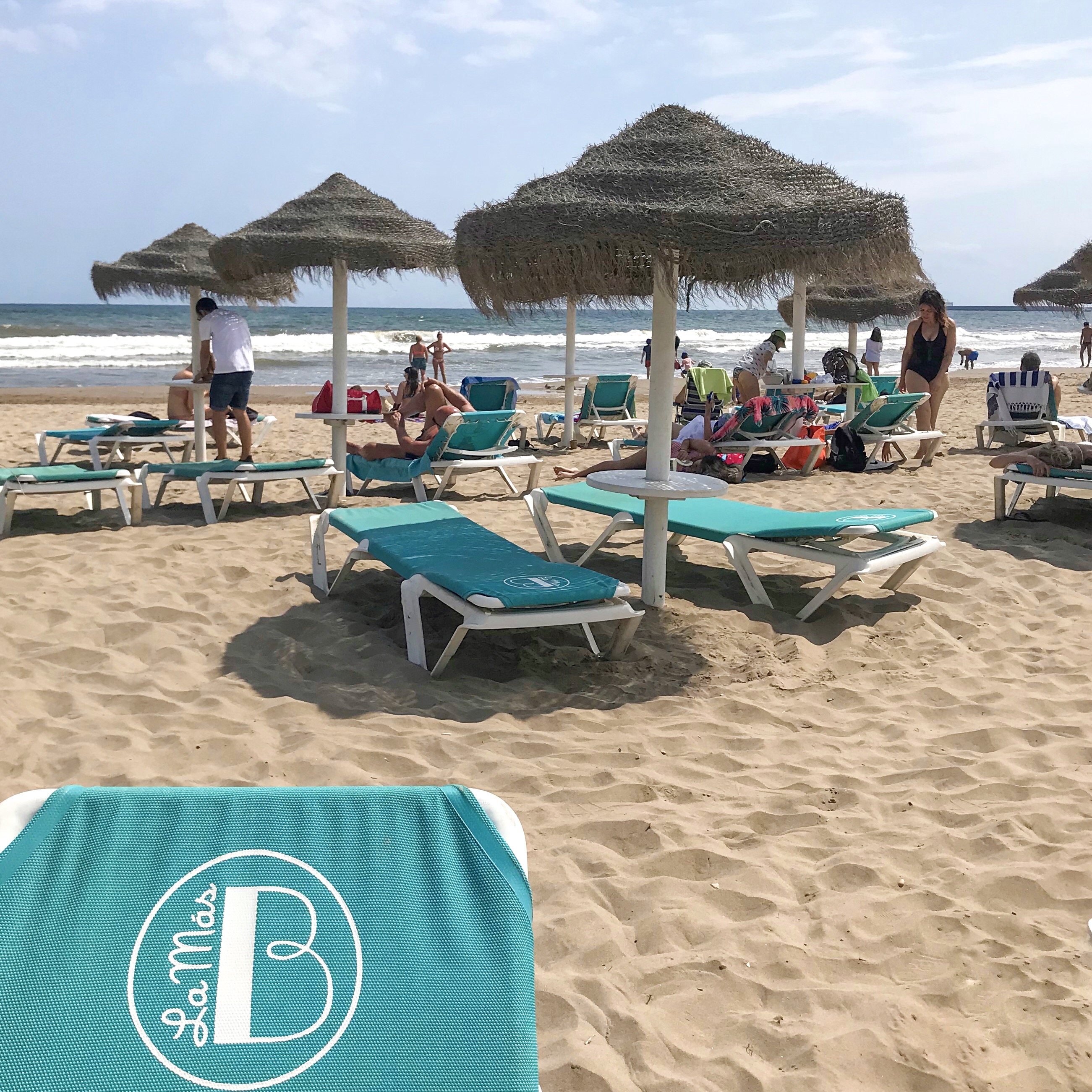 There was still a part of the old town we had to visit, so we decided to do that before dinner. Barrio del Carmen is famous for the many cafes, bars and restaurants. If there is a charismatic street in the neighborhood that you can’t miss it would be the Calle Caballeros. Valencia’s bar street ends upon Plaza de la Virgin, the city’s most beautiful square. Plaza de la Virgen is located on the site that once was the forum of Roman Valencia. It is surrounded by impressive, historical buildings such as the Basilica Nuestra Señora de los Desamparados and the Gothic Palau de la Generalitat, the seat of government for the Valencia region. In the middle of the square is a fabulous fountain which represents the irrigation of the Turia River. 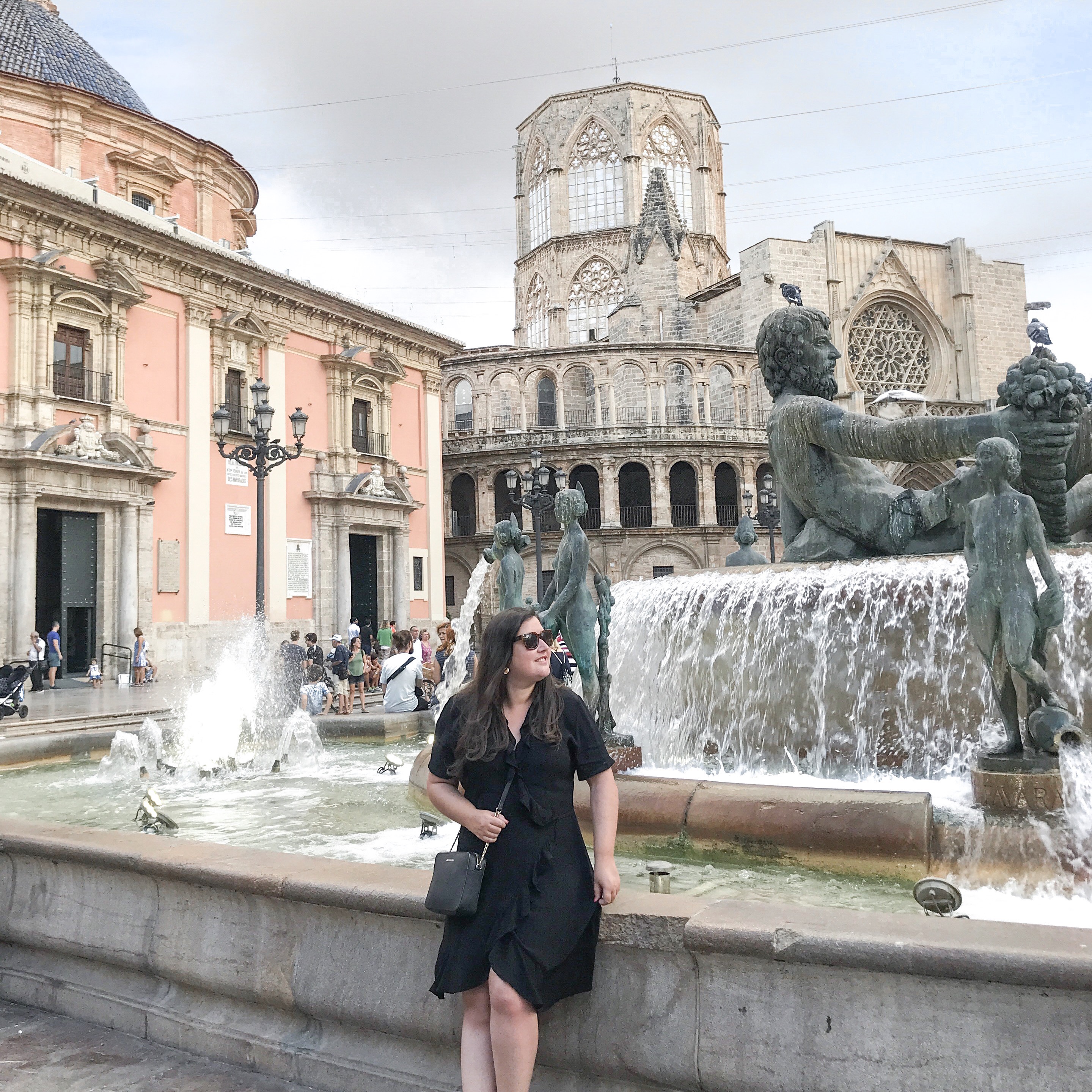 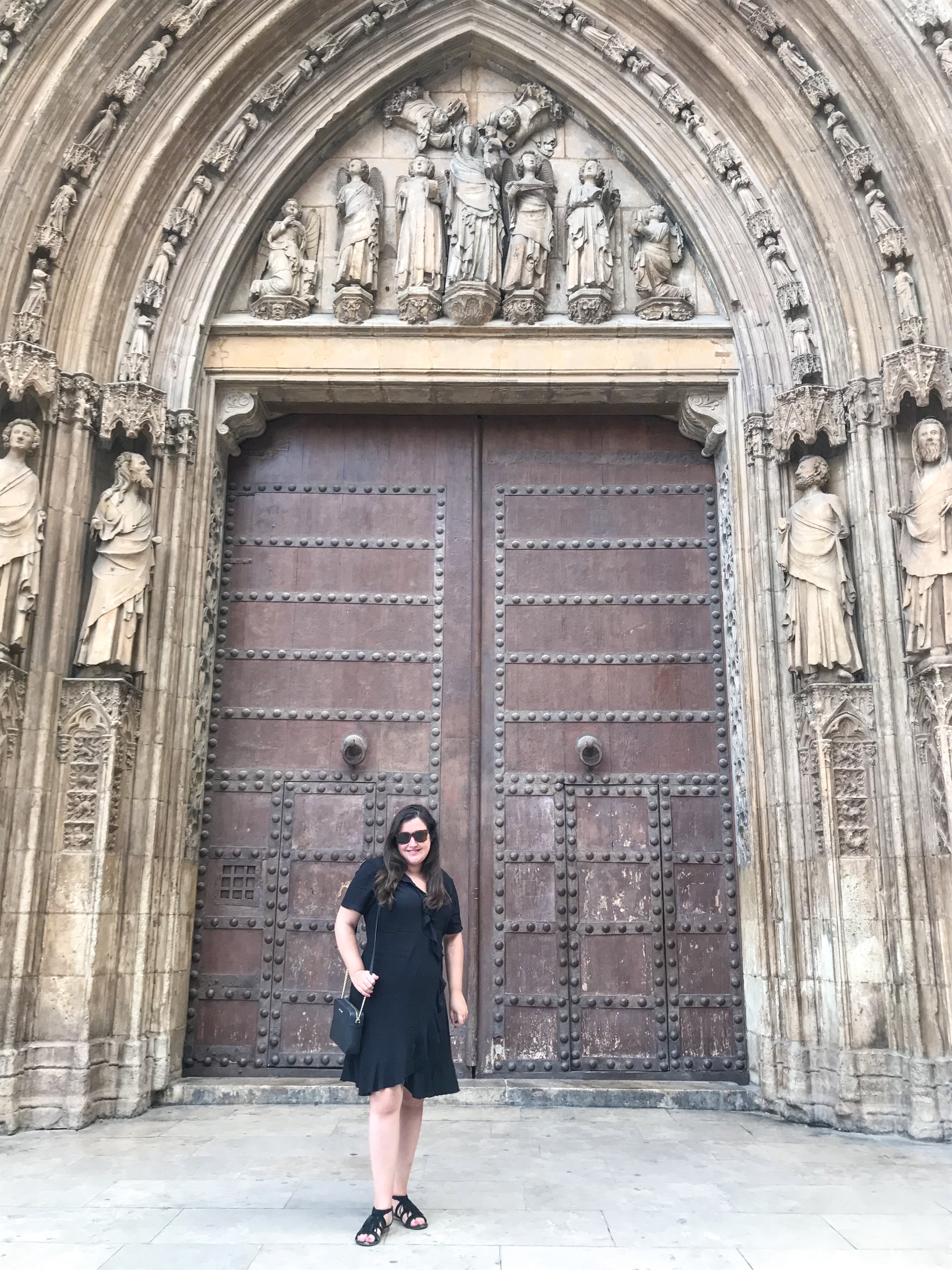 Another landmark on your to do list should be the Torres de Serranos, one of Valencia’s old city gates. Rumous has it that you can enjoy splendid views of the city and the river Turia from its terraces, but unfortunately we were too late to visit. 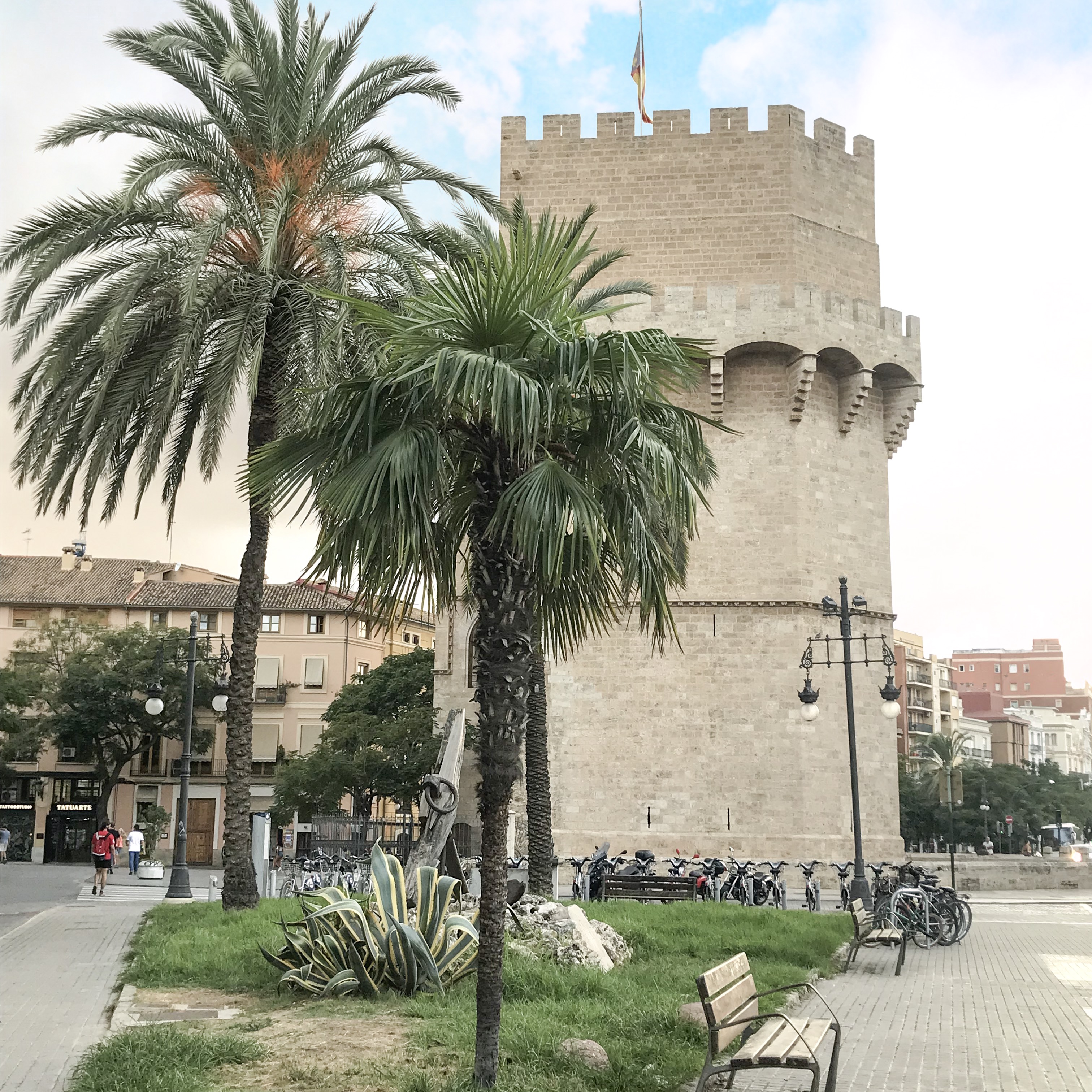 What most people don’t know is that Valencia is the undisputed home from paella! The region’s climate is perfect for growing rice and Valencians have enjoyed paella for centuries. We figured we couldn’t leave the city without having a taste of this delicious dish, so on that note I asked my friends Sven & Thierry for their favorite paella serving restaurant. They suggested we headed to Mattilda, a hip and cozy restaurant a little bit of the beaten track. The paella we had was absolutely delicious, but not at all what we had in mind. Turned out that there was a lot we had to learn about the dish. Like the fact that there is no place for chorizo and seafood in paella! Both ingredients were later additions to please tourists. The ingredients in the traditional Valencian paella are the things that farmers in the rice fields could easily get a hold of: like white and green beans, chicken, rabbit and sometimes even snails (luckily not in ours though). By the way did you know that paella is actually eaten for lunch? Well epic fail on that too, as we didn’t and had it for dinner instead! Oops! But hey, one of the reasons why we travel is to learn more about a country’s traditions right?! Next time I’m visiting Spain, I will eat paella for lunch, pinky promise 😉 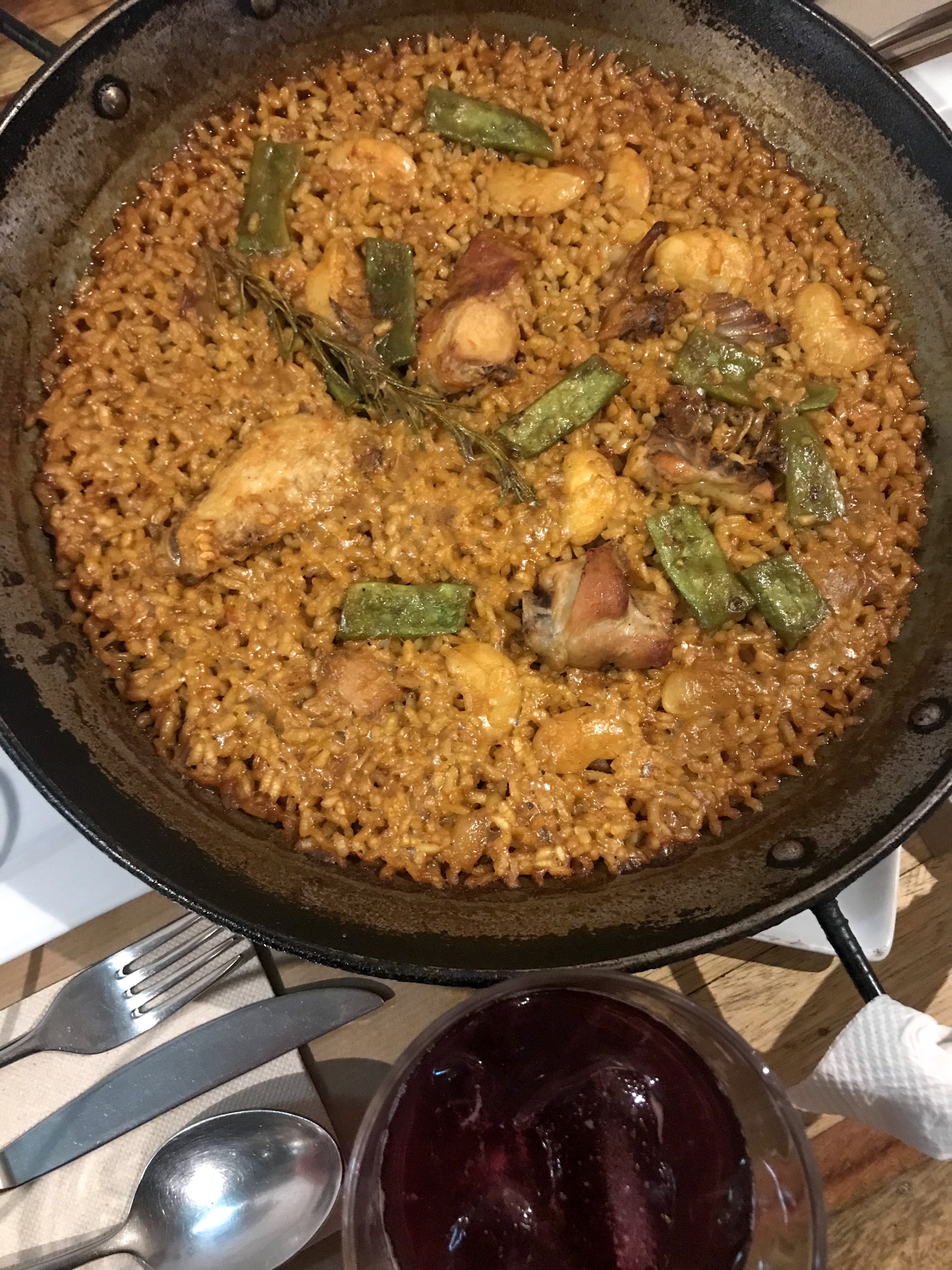