Day two was all about discovering Valencia’s old town. Ciutat Vella is actually a greater district, divided into five smaller neighborhoods; La Seu, La Xerea, El Carmen, El Pilar, El Mercat em Sant Francesc. You will see that there are a lot of beautiful sights to discover in the historical center. Valencia was founded in 138BC by the Romans. In 711 the city was ruled by the Mores. And finally as of the 13th century Valencia fell under Spanish ruling. In the 15th century the city flourished and so beautiful buildings, palaces, churches and universities were build. As the weather gods were also very much in our favor, and as the temperatures in the afternoon rose to 35 degrees, we decided to enjoy some fun in the sun at La Malvarossa Beach.

With hundreds of stalls selling fruits, veggies and meat, Valencia’s Mercado Central is among the largest fresh food markets in Europe. This stunning Modernist building was completed in 1928. And although it has become one of the city’s principal tourist attractions, it remained popular among locals too as many do their everyday shopping here.

We saw a few benches near the market so we figured we’d buy some delicious fruit, bread, cheese and ham and enjoy our breakfast outside with gorgeous views upon La Lonja de la Seda and La Iglesia de los Santos Juanes. Good times!

Across from the market lays La Lonja de la Seda, built between 1482 and 1533 and used for trading in silk (hence its name). The beautiful gothic building shows off the power and wealth of a major Mediterranean mercantile city in the 15th and 16th centuries. La Lonja de la Seda is one of the most impressive buildings in Valencia’s old town and is also part of the UNESCO World Heritages Site, so it’s really worth visiting. 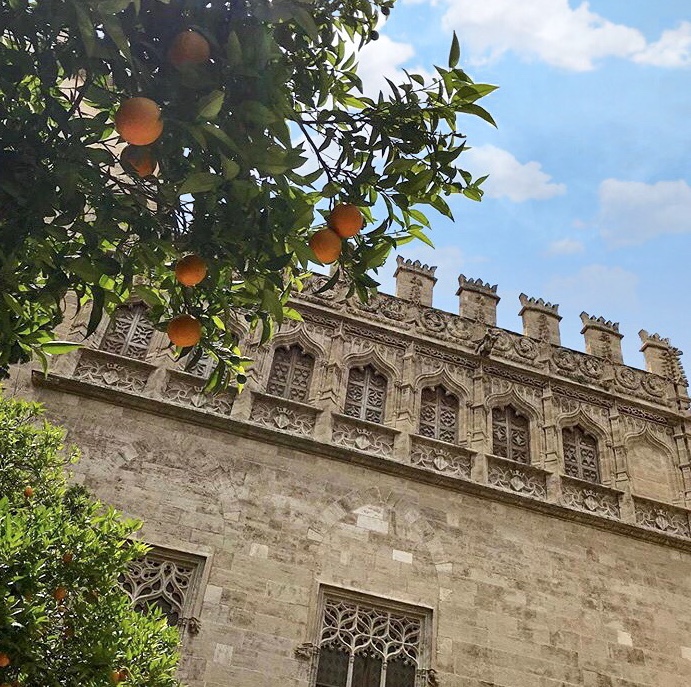 Located in Lope de Vega Square, is La Estrecha, Europe’s narrowest building. Make sure not to miss it, because with it 107 cm wide it’s easy to walk by!  Across the street you will find the Santa Catalina Church, one of the oldest churches in the city. Its construction goes back to the days of the Reconquest.

If you want to try a traditional ‘Horchata’ head to La Horchateria Santa Catalina. This local, milky drink is made from water, sugar and tiger nuts. With that you have to order a ‘Farton’, a thin pastry with sugar. At first the beverage tasted a bit funny, because it was different from everything else we tasted before, but it’s actually very nice and refreshing. Perfect for those hot summer days in the city! 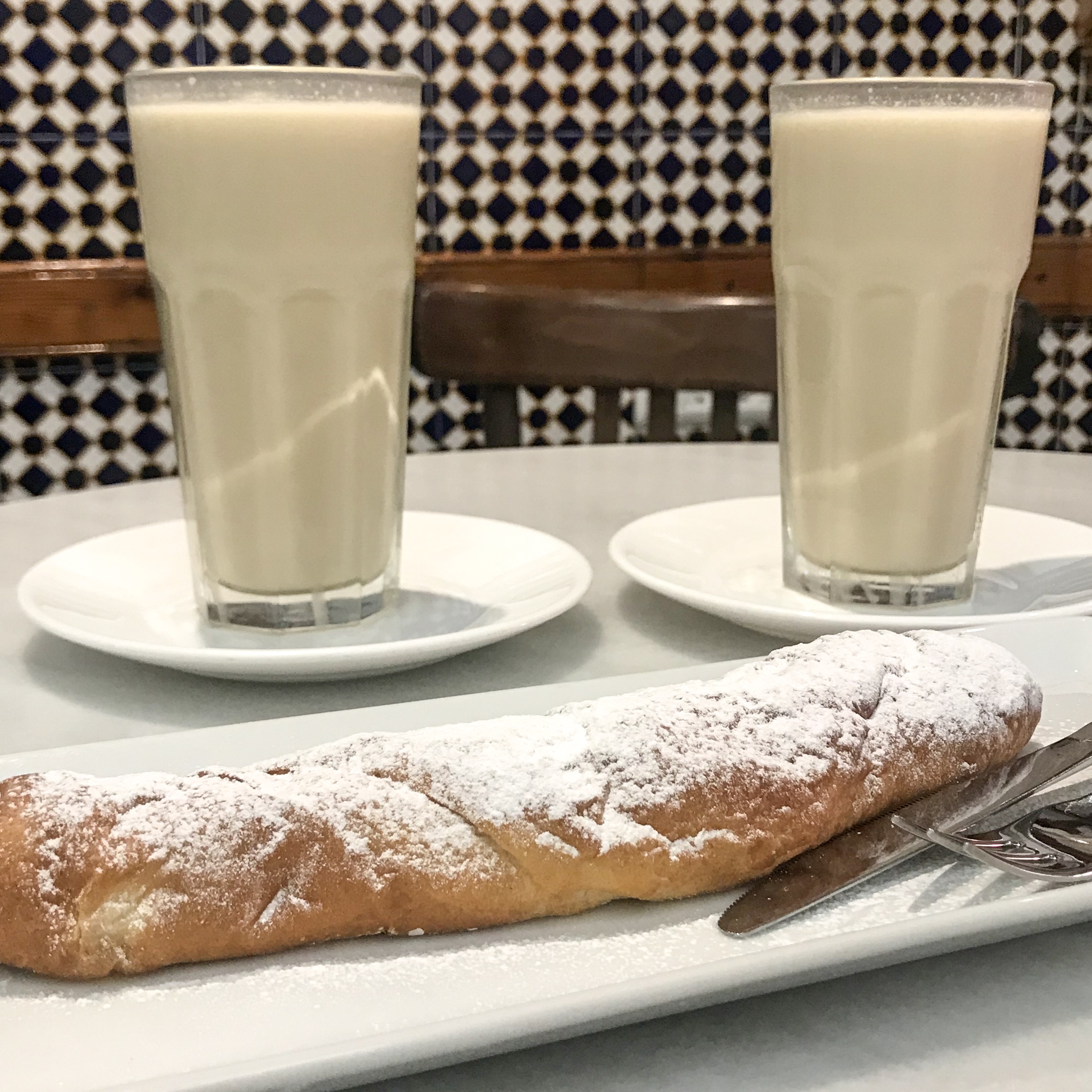 Around the corner you will find the lively Plaza de la Reina. The square is dominated by the Cathedral of Valencia, which was originally built on the site of a mosque in 1262. The cathedral is mainly gothic with a baroque facade. From its clock tower, El Micalet, you have the most beautiful views over the city. That is if you don’t mind climbing the 207 steps.

Behind the cathedral is the famous Barrio del Carmen. The plan was to explore El Carmen, but as it was too hot, we decided to go to the beach early and visit that part of the old town the next day.

Chillax at the Marina Beach Club

La Malvarrosa Beach is split into three main areas, Malvarrosa, Las Arenas and Patacona Beach. The Marina Beach Club is located at the Malvarossa part of the coastline.

At the Marine Beach Club you can either rent a bed at the beach or at the infinity pool. We went for the last option and really enjoyed our time there. The beds are super comfy and thanks to the music that’s playing, there is a nice ambiance too!
It costs about € 30,00 per person to get in. This includes entrance fee, sun bed and a € 10 spending budget in the bar. There is also a € 15 warranty for the use of towels, which will be refunded later when you return them. This unless you spend it in the bar, which is what we did! Damn those cocktails! But hey so worth it! 😉 It’s also possible to order some food, while you are chilling on the beds. On the menu you will find plenty of finger food, several burgers and sandwiches. For the more elaborate kitchen you should go to the Marina or El Portret restaurants. We didn’t eat here, so I really can’t speak on the food, but the restaurants looked very inviting! At night the Marina Beach Club turns into a disco, so this is also where you need to be if you like to party. 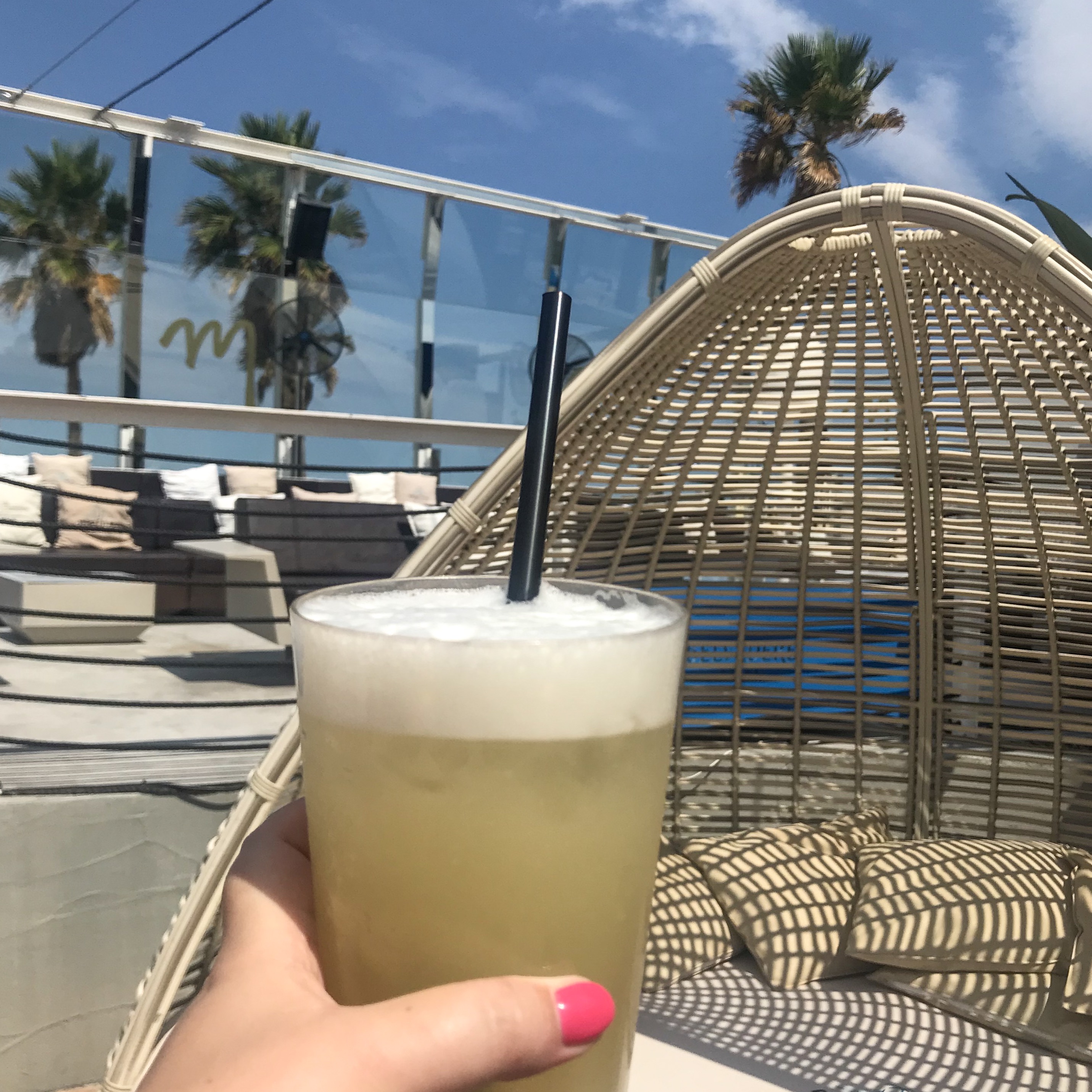 Sagardi is the place to be in Valencia for delicious pintxos. The pintxos bar is one of the most symbolic elements of Spanish gastronomic culture. As per tradition you choose the pintxos you like best at the bar and collect the sticks so the waiters later know how many pintxos you had. Sagardi is one of the most popular places in Valencia with the locals, so you might have to wait a bit to get a table. But believe me it’s worth it! Oh and hey while you’re there, you might want to order some Tinto De Verano or Aqua de Valencia! So good! Salute!