I just spent the most amazing few days in Stockholm. The city really exceeded my expectations in every single way. With it clean streets, waterways, colorful buildings and green spaces throughout the city, it’s not hard to fall in love with the Swedish capital. I’m honestly very happy I chose Stockholm as a destination for my first solo trip. Naturally I was a bit nervous at first, but everyone I met was so nice and helpful, that I felt right at ease. I’m pretty sure that because of that, Stockholm will forever hold a very special place in my heart. I stayed in the city for three nights, but due to some late flight times I was only able to spend three full days there. However with some good planning in advance I was able to fit in all the highlights onto my itinerary. In the first post I will be taking you to Gamla Stan, Kungsholmen & Skeppsholmen.

On my first full day, I woke up super early. Not that I didn’t sleep well, but as ‘Midsummer’ was just around the corner, the nights were much shorter than I’m used to (dark between 12AM and 3AM). When I woke up around 6.30AM it felt like it was already midday, so I decided to get an early start. After breakfast I hopped on the subway and went on my way to Gamla Stan, Stockholms old town and home of the first Viking settlement where Stockholm was founded in 1252. It’s one of the best preserved medieval city centers in Europe and a very popular tourist spot in the city. 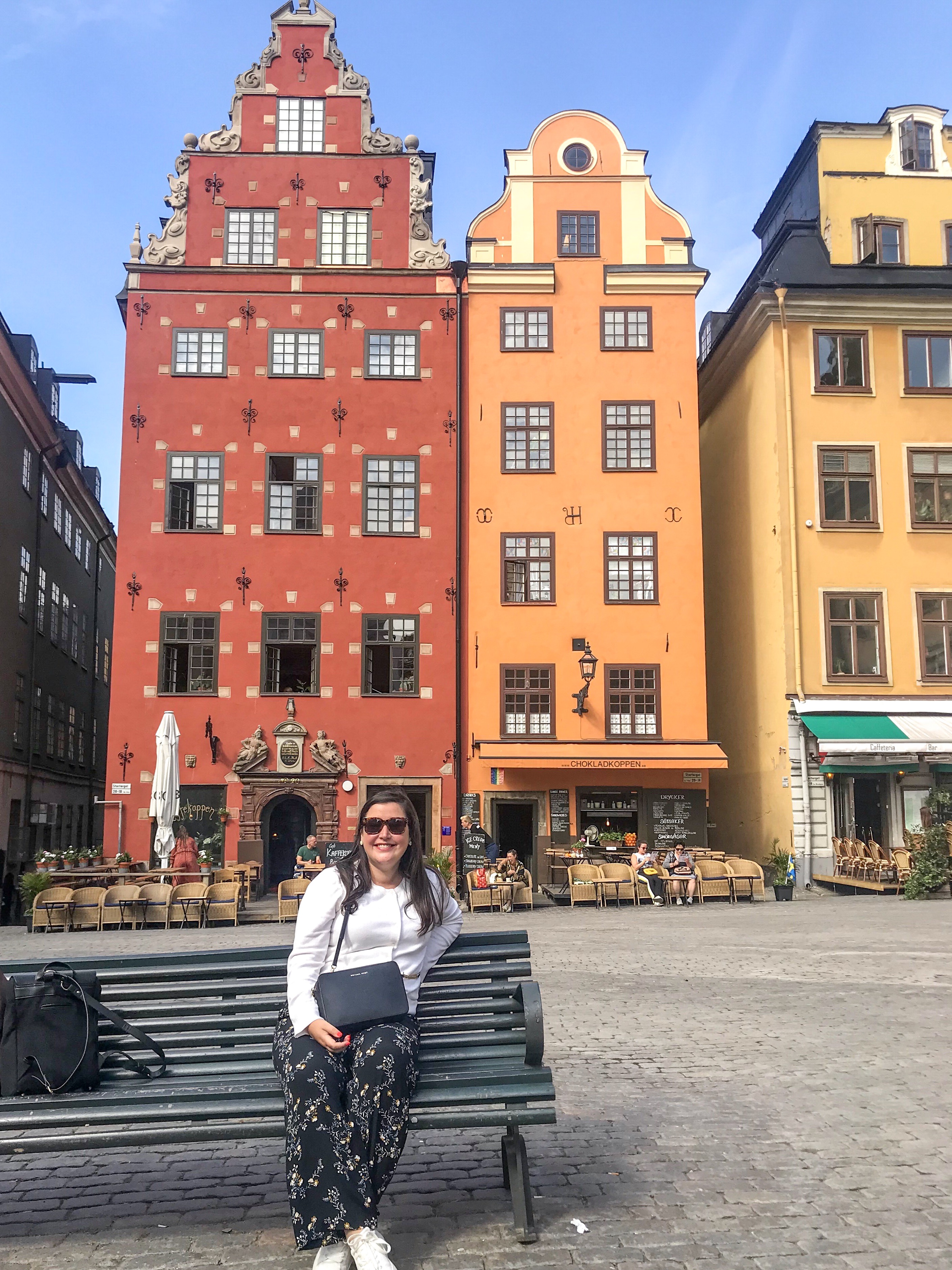 I had planned to join a ‘Free Walking Tour’ at 10 am, but as I was there earlier I decided to check out Stortoget already and admire the colorful gingerbread-like buildings. Stortoget is Stockholm’s main square and the heart of the city. You can find the Nobel Price Museum and Chokladkoppen there. Chokladkoppen is famous for its hot coco and ‘kanelbulle’ aka cinnamon rolls. I decided to buy a kanelbulle for later, and after some people watching, I headed back to the Gamla Stan metro station for my ‘rendez-vous’ with Free Walking Tour Stockholm. 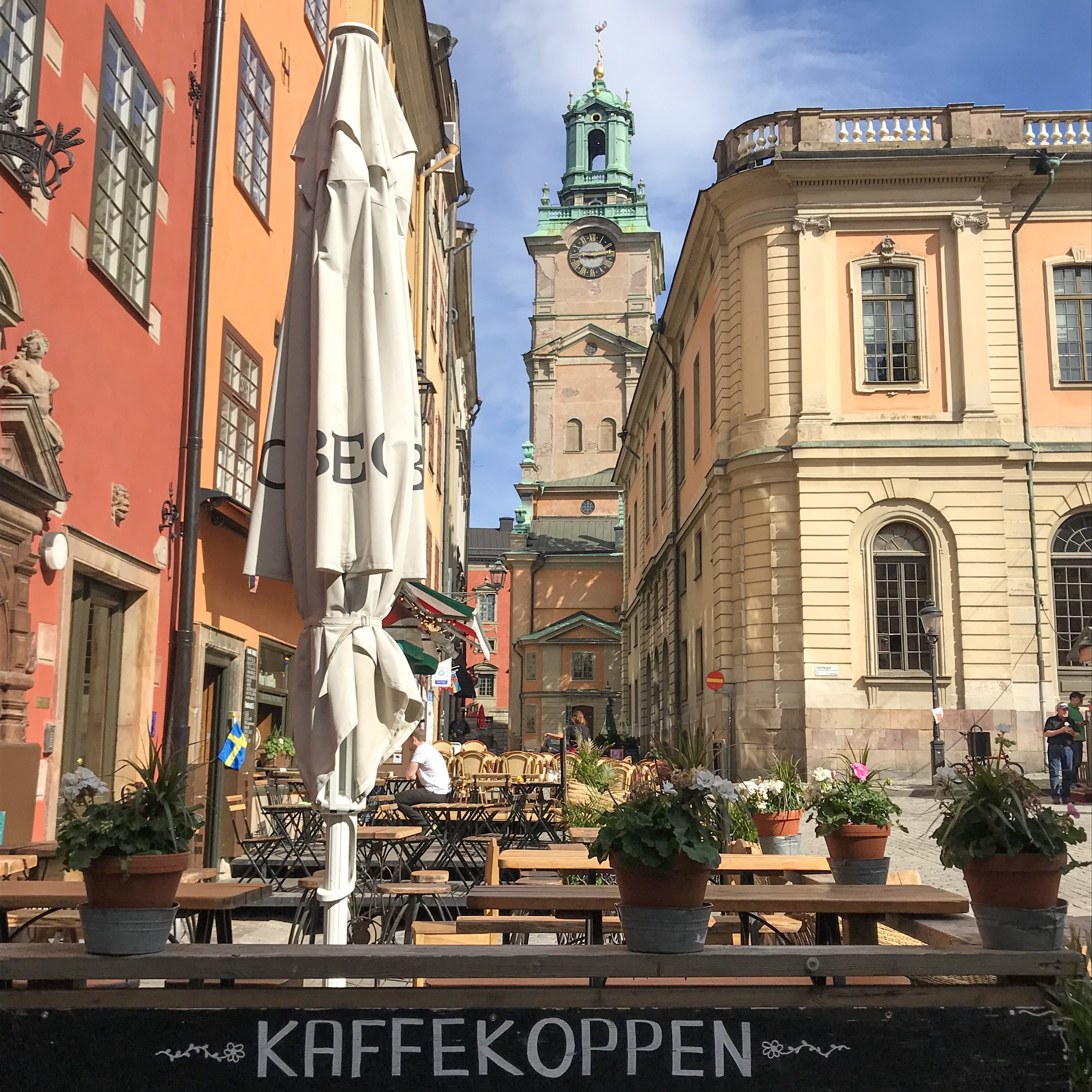 Free Walking Tour Stockholm organizes guided tours throughout Gamla Stan every day at 10AM. There is no need to book in advance. During the tour you will learn a lot more about the history of Stockholm. Normally I’m not someone who enjoys guided tours much, (to much details, a bit boring you know), but our guide Alex showed us around town in a very amusing way, so I can only recommend to go on a tour with them. Some of the highlights were the Priest Street, the German Church and the Alley of Mårten Trotzig, the narrowest street in Stockholm. Also on the shedule: the Royal Palace, Stockholm second oldest square ‘The Iron Square’ and the Iron Boy. The latter known in English as the “little boy who looks at the moon”. With its fifteen centimeters high it is the smallest public statue in Stockholm. And yes even smaller than our very own ‘Manneken Pis’!

The tour took about two hours and finished just in time to walk back from Stortoget to the Royal Palace to catch a glimpse of the ‘Changing of the Guards’ at 12.15PM. Generally, the Changing of the Guard ceremony is held every day from April 23 to August 31.

The Royal palace itself is with its 600 rooms one of the largest palaces in Europe! Besides the Royal Apartments you can also visit three museums in there: the Treasury with the regalia, the Kronor Museum that portrays the palaces medieval history and Gustav III’s Museum of Antiquities. 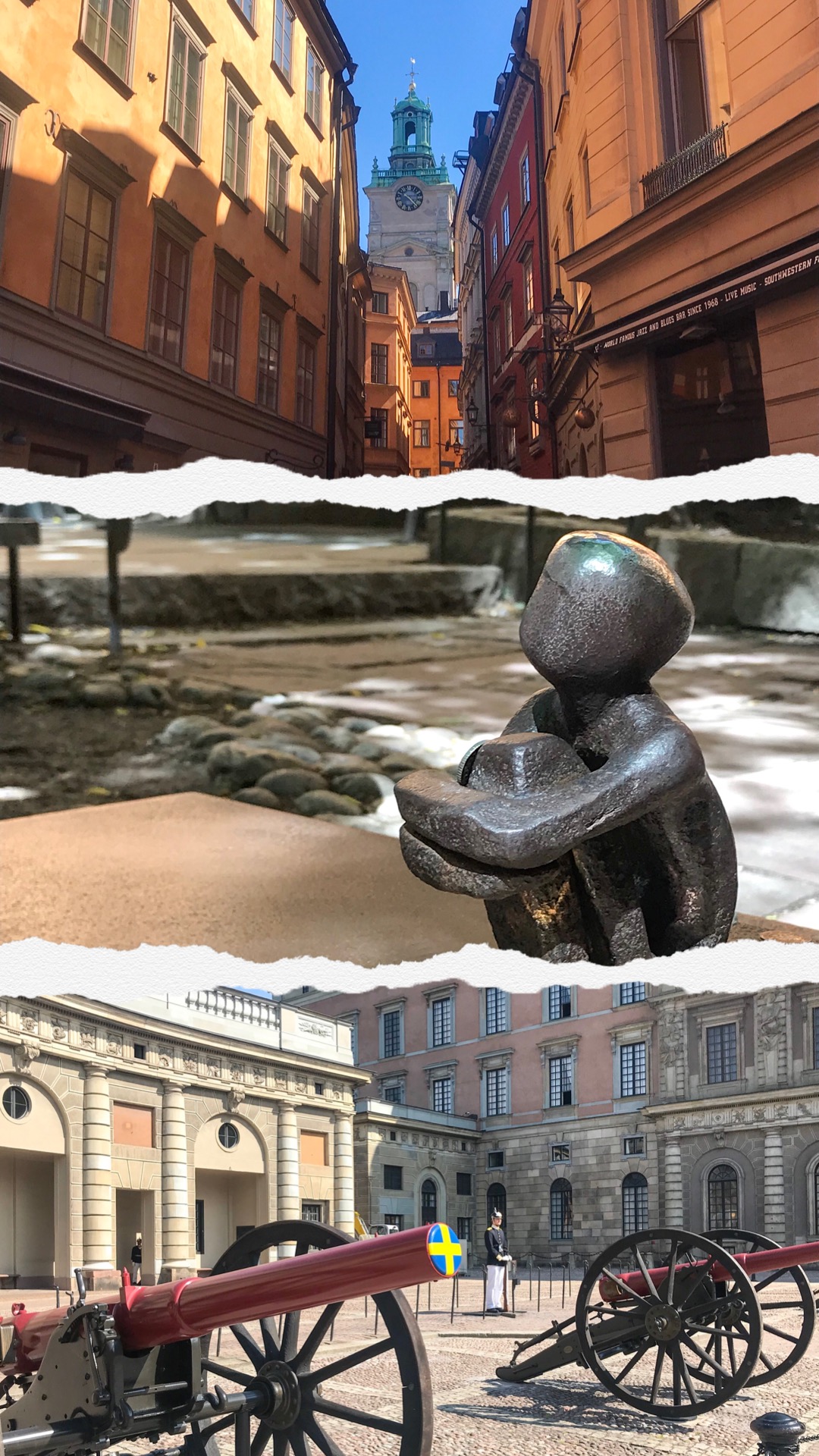 Many tourists buy souvenirs at Västerlånggatan, Gamla Stan’s main street, but I would not recommend that as everything is much pricier there. More original shops and galleries are located in the surrounding streets: Österlånggatan, Köpmangatan and Tyska Brinken, so it’s better to buy your presents there.

Next destination: the subway to Radhuset on Kungsholmen Island! And no, not because I was too lazy to walk, but to see some of the Subway Art. Stockholm’s subway system is said to be the longest art exhibition in the world. The metro stations have been spruced up with beautiful statues, murals and installations. My favorites being T-Centralen, Stadion & Kungsträdgården! 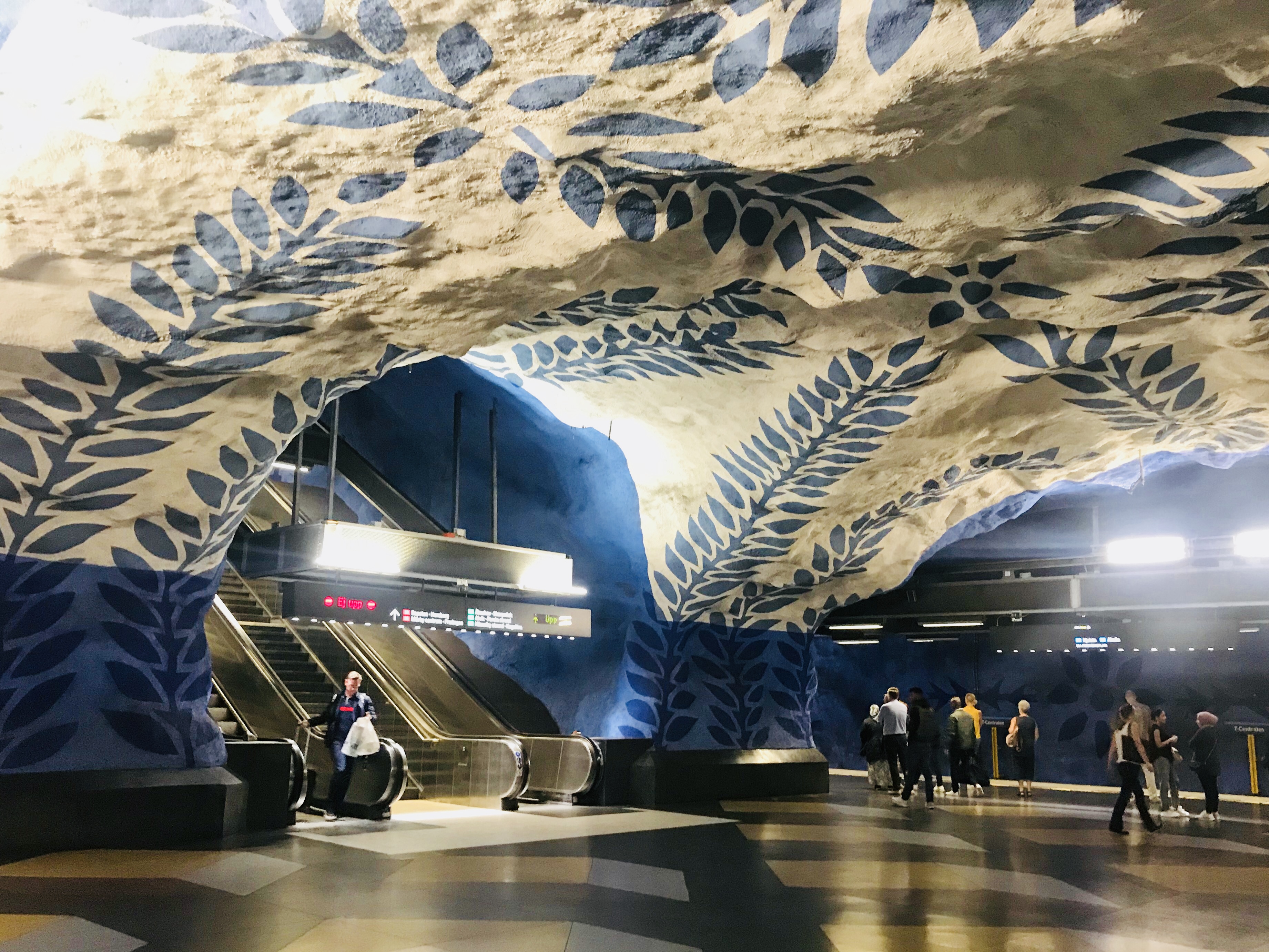 But enough about the subway, by that point I was hungry, so I made a pitstop at Johan & Nyström, and had a delicious Salmon Toast while enjoying some sun on their terrace. 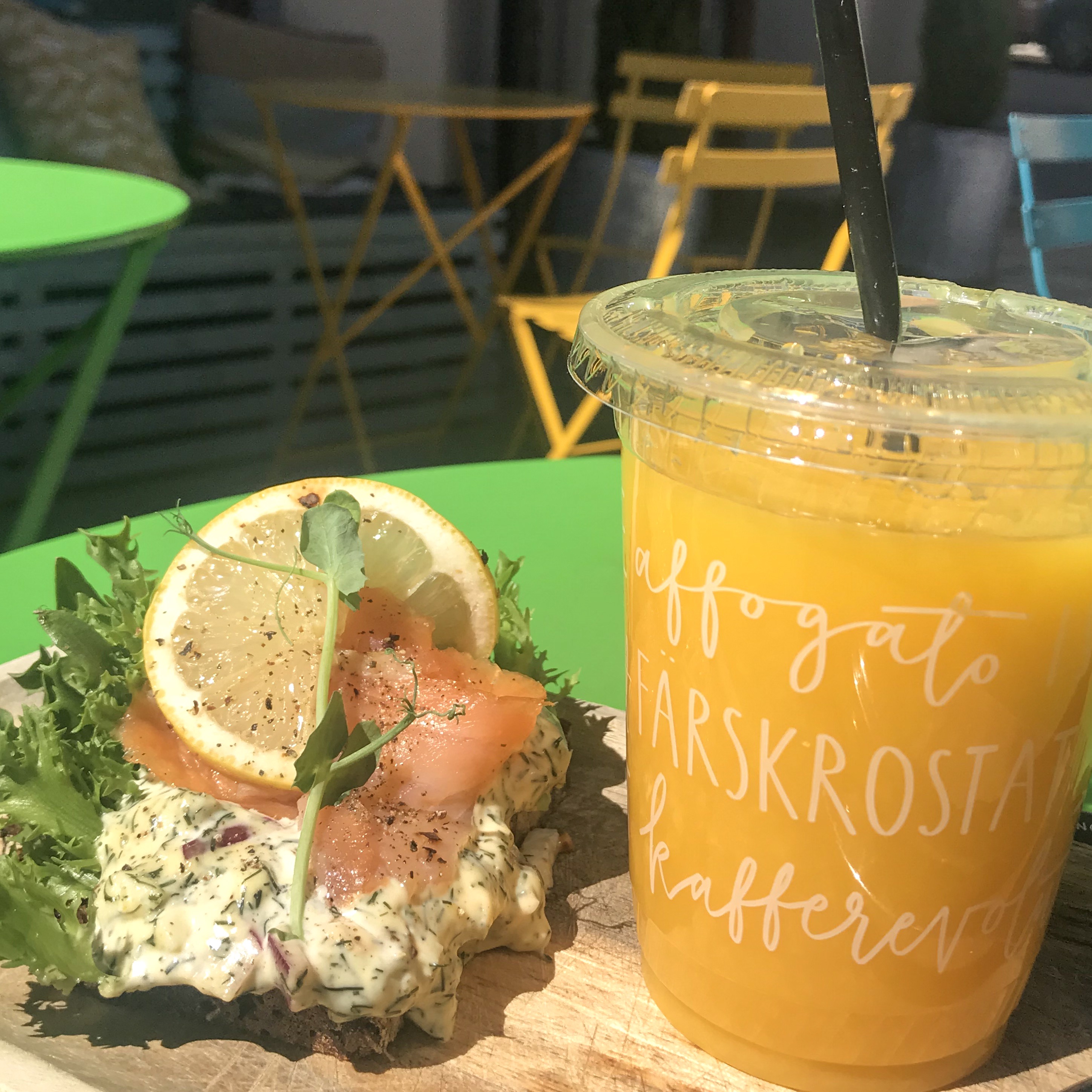 Stockholm’s City Hall, with its spire featuring the golden ‘Three Crowns’, is one of the most famous landmarks in the city. Unfortunately for me the building was undergoing some renovations, so I wasn’t able to witness the full beauty of it (or take a picture of it). Radhuset was built between 1911 and 1923 by Kreuger & Tall. From the city hall you have an amazing view upon Riddarholmen Church, the burial church of the Swedish monarchs and one of the oldest churches in Stockholm. 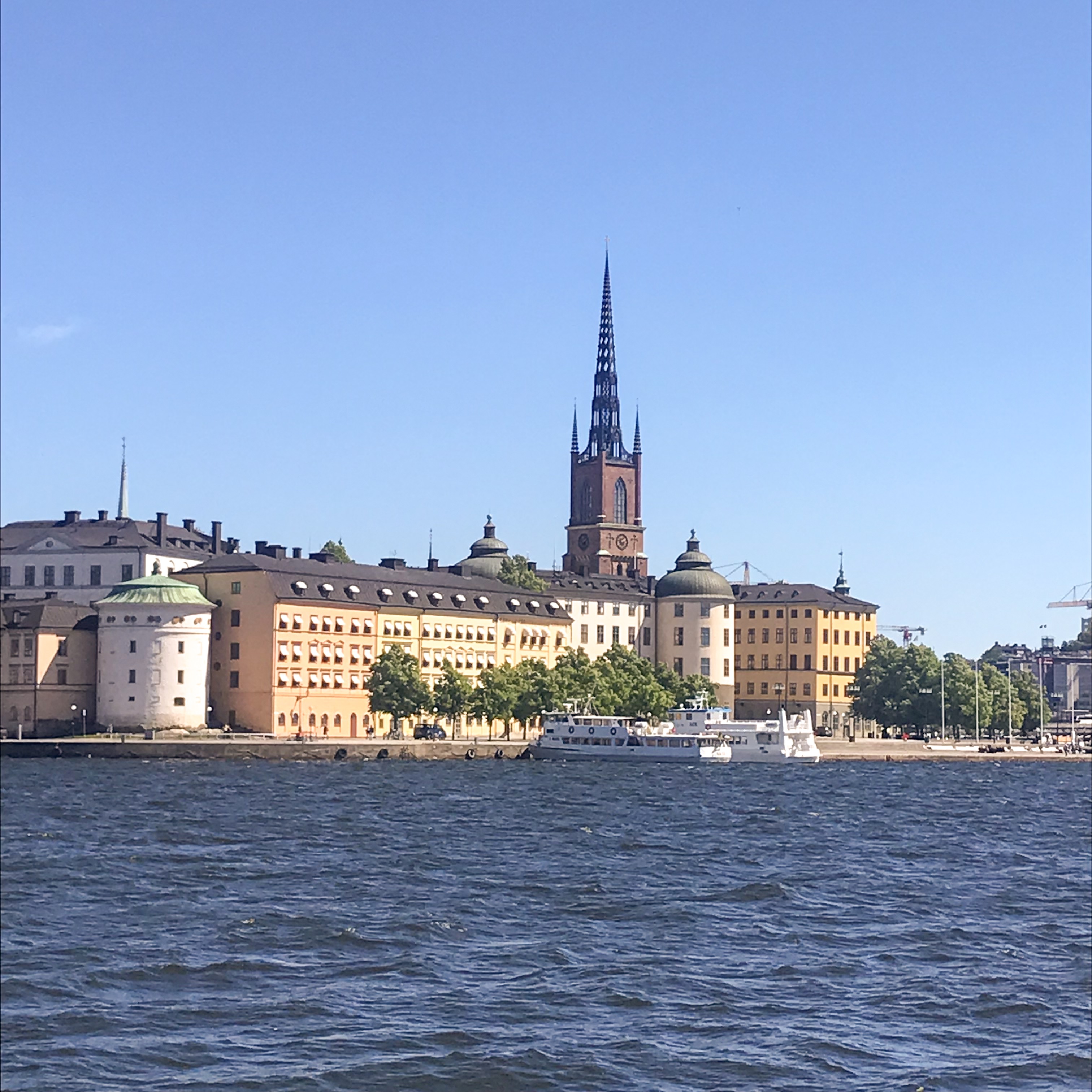 Stockholm’s City Hall has a lovely lakeside site on the north shore of Riddarfjarden with beautiful statues from Carl Eldh, of a man and a woman, dancing above the waters in a celebration of life. I quickly noticed that the garden was very popular with local sunbathers, so I decided to join them before heading to my next stop. Oh well, forever chasing the sun right?! 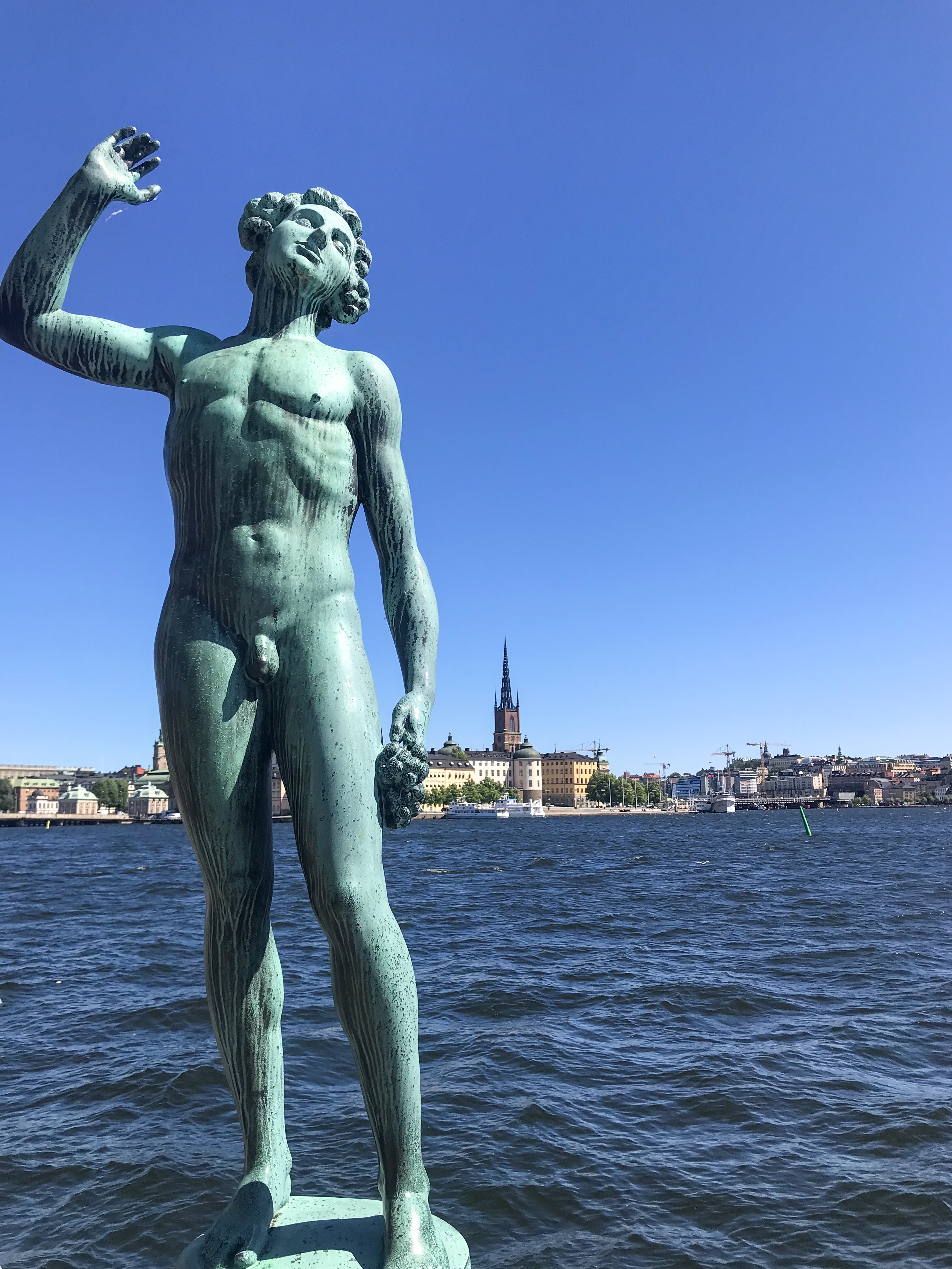 I jumped back onto the metro and walked around Kungsträdgården, which is located in the Norrmalm part of Stockholm. I was not really planning on visiting Norrmalm as that is the business district of Stockholm, but I figured as I had to pass by the park to get to Skeppsholmen, why not check it out right?! Kungsträdgården is one of Stockholm’s oldest public parks. The name, meaning “The King’s Garden”, refers to the area’s royal history. Kungsträdgården is a fun, green space were both locals and tourist alike come together to enjoy a game of chess, read a book or indulge in people watching. In April the park is even more special, because than the Cherry Blossom threes are in bloom. Kungsträdgården seemed like the perfect spot to enjoy my ‘kannelbulle’ from Chokladkoppen I bought earlier that day, which was totally delicious by the way!

Enjoy the views from The Bridge to Skeppsholmen & Gilded Crown

With some renewed energy from my ‘Fika’ moment in the park I walked along the water near the Gilded Crown on the bridge over to Skeppsholmen. From that point you have a stunning view over the Royal Palace. If you continue walking across the bridge, you will arrive at Skeppsholmen Island, which used to be a marine base, but nowadays houses the Moderna Museet and Östasiatiska museet. I did not visit any of the museums, as the weather was really nice and I rather stayed outside and enjoy the spectacular views! It was also about time to head back to the hotel, drop off my stuff and refresh for dinner. 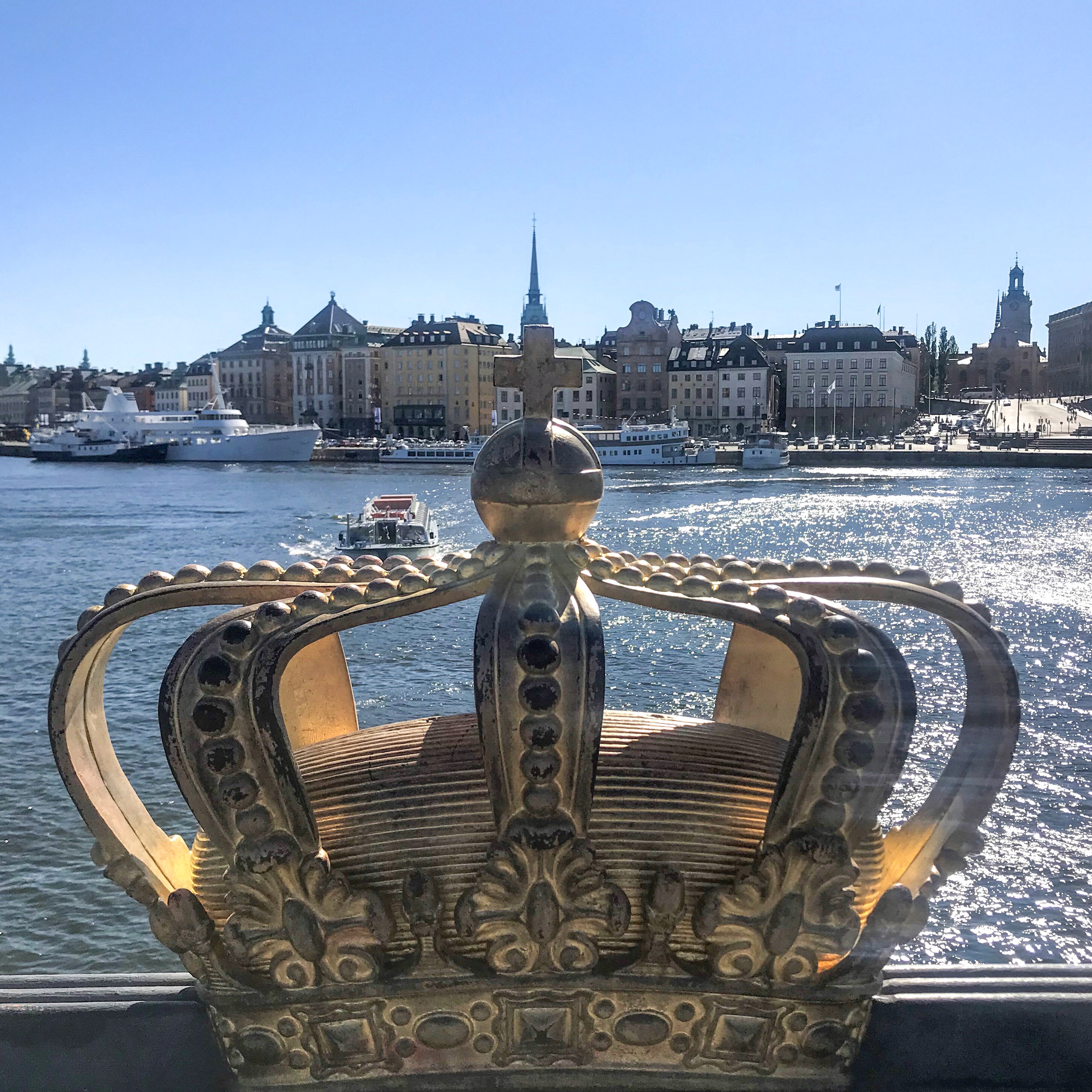 For dinner I wanted to eat in restaurants that were within five minutes walking distance from my hotel (female solo traveler you know), and that were serving Swedish cuisine. One of the receptionists at NOFO Hotel & Winebar suggested I’d check out Kvarven and I’m really happy she did, because the food and ambiance was wonderful! Kvarnen, has been serving the typical Swedish ‘husmanskost’ since 1908. It’s also the place to be where locals go to enjoy a beer after work. I was quite impressed with the interior of the restaurant, which really took me back in time. Kvarnen is famous for its kötttbullar (meatballs), but you can also find reindeer steak and other meat dishes on the menu. I chose the ‘Fish & Seafood Stew’ which was so delicious and honestly the best meal during my Stockholm adventure! After dinner I went back to the hotel and enjoyed a nightcap at NOFO! I guess staying at a hotel with its own wine bar and cozy courtyard has it perks. Anyways more on NOFO Hotel & Wine Bar in a later post! 😊 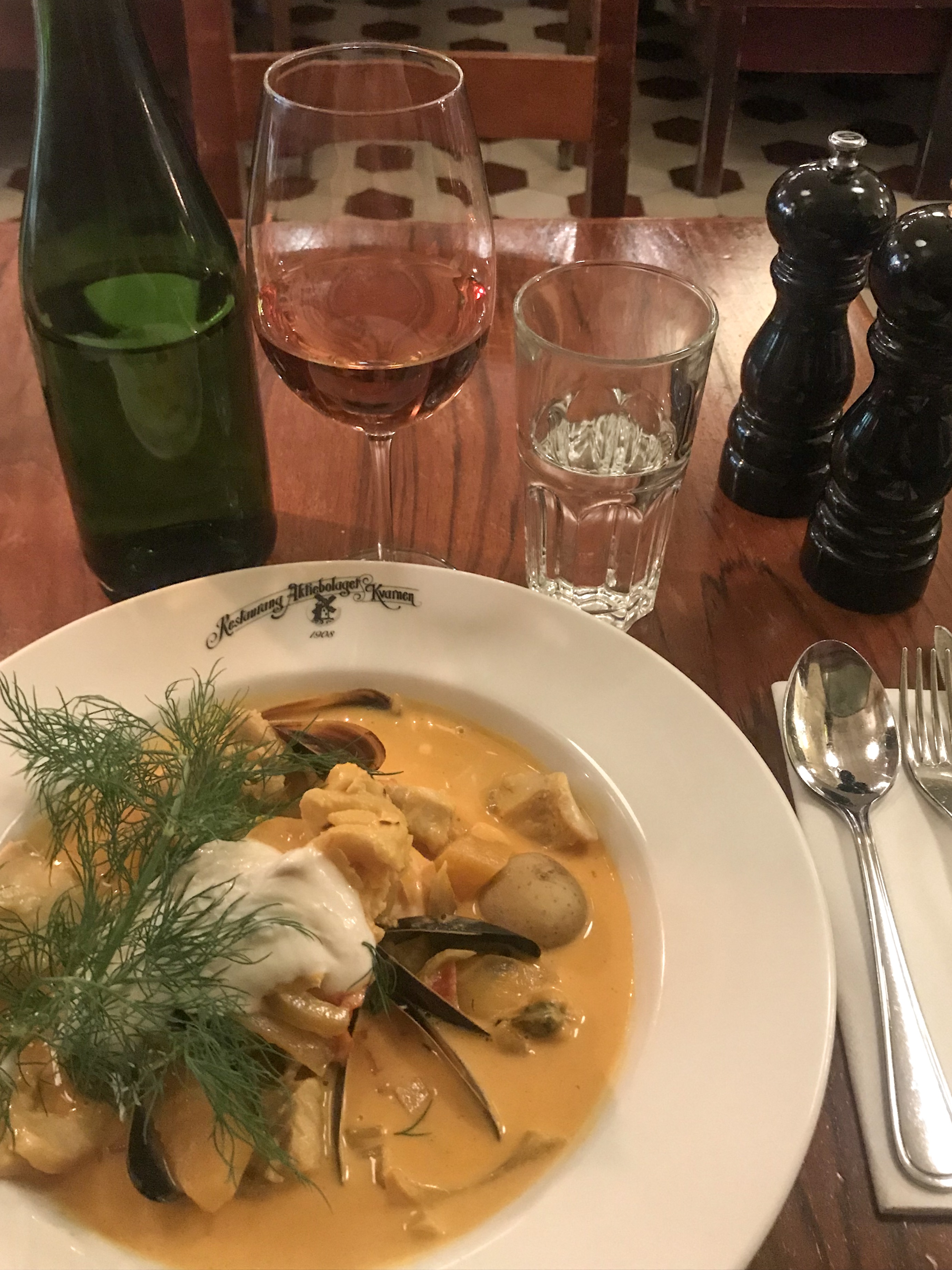